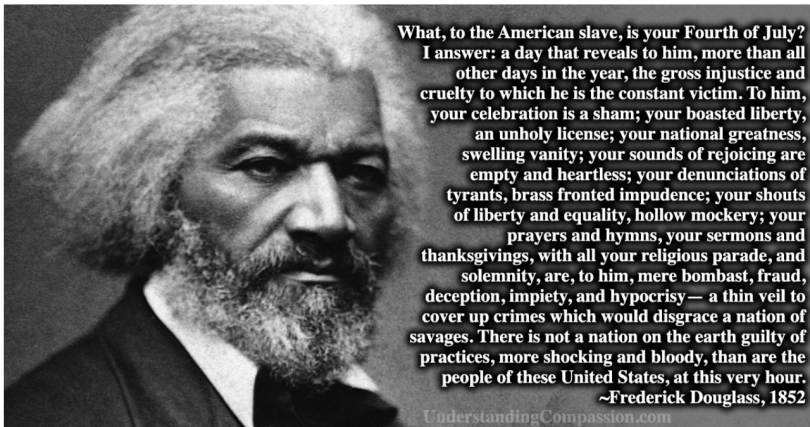 On this painful Fourth of July 2022, where the hope and delight of our nation’s yearly celebration is laced with griefs of many varieties, we noticed that NPR has marked the day by asking the descendants of Frederick Douglass to read his indelible speech, What to the Slave is 4th of July?

Douglass, among the nation’s most gifted abolitionists, who was himself born into slavery, composed his famous speech when, in 1852, the Ladies Anti-Slavery Society of Rochester, N.Y., invited him address a group on July 4, on that 76th anniversary of the signing of the Declaration of Independence.

Douglass agreed, but opted to speak on July 5 instead.

The recording of Douglass’ speech that NPR chose to broadcast, is recited by several of his descendants. You can listen to it here.

Or below you’ll find NPR’s video version of the speech, recorded two years ago for July 4, 2020, and also performed by the young descendants of Frederick Douglass.

We hope your 4th of July day and evening is filled with time spent with those you love and, with luck, a bit of fireworks watching.

Yet, if you’ve not ever read or heard Douglass’ immortal composition, it’s worth your time. So give yourself this gift.