Amid a national crisis over voter suppression, Californians are considering a historic expansion of the right to vote. Proposition 17, which will appear on the state’s November 3rd ballot, would grant voting rights to individuals on state parole.

Today, 55,000 Californians are on parole after having been released from prison. They are working, paying taxes, raising families, and contributing to their communities, yet are denied basic participation in our democracy.

Formerly incarcerated people face major hurdles as they reintegrate into society. It can be difficult to find a place to live, get a job, or reconnect with loved ones. Yet the experience of returning home provides a vital, firsthand perspective on some of the biggest issues facing California and the nation today: employment, affordable housing, law enforcement accountability, and mass incarceration. Excluding people on parole from the political process means silencing those with informed views and a direct stake in the decisions made in Washington D.C., Sacramento, and city halls across the state.

By denying voting rights to those on parole, the state has barred many Californians of color from the ballot box. Black people, in particular, are over-represented among California’s parole population—a reflection of the disparate harm the state’s justice system imposes on Black communities through over-policing and biased arrests, prosecutions, and sentences. In late 2016, 26 percent of people on parole were Black compared to 6 percent of California’s population. Restoring voting rights to those on parole would allow more Californians of color to cast a ballot and ensure that the state’s electorate better reflects its communities.

Research has shown that one consequence of mass incarceration is a frayed connection to civic life. People who have been imprisoned are less likely to trust government, believe it is acting on their behalf, and, as a result, participate in elections. This effect stems from their experiences in a system beset with injustices and racism. Opening up opportunities for formerly incarcerated Californians to vote removes one glaring unfairness in the reentry process, which could help to boost civic engagement—not just for those on parole, but also for the family members, friends, and neighbors who have seen the ripple effects of an unjust system.

In addition to restoring basic rights to thousands, Proposition 17 will streamline the state’s overly complicated voting laws. Current law allows individuals in jail to vote, but only if they are there for a misdemeanor offense, a felony jail sentence, because jail time is a condition of their probation, or they are awaiting trial. Excluded are those jailed for a parole violation or serving time in jail on a state prison sentence. Similarly, people in the community who are being supervised by a probation officer may vote, while those free on state parole may not. Confusion over who can vote reduces overall participation and further disempowers people impacted by the justice system.

America’s democratic ideals are facing unprecedented threats. Our upcoming Election Day could be marred by a disinformation campaign, widespread voter suppression, and blatant manipulation by foreign governments. Amid mounting pressures, California will have the opportunity to strengthen its democracy by aligning with the cause of transparent and inclusive elections. Giving voice to those returning from prison through Proposition 17 would bring California one step closer to making its government work for all. 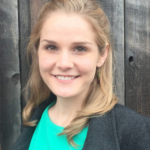 Author Maureen Washburn is a Policy Analyst at the Center on Juvenile and Criminal Justice, a nonprofit, nonpartisan organization based in San Francisco. Recently, Washburn has co-authored reports on the fiscal impact of Proposition 20 and conditions in California’s Division of Juvenile Justice.