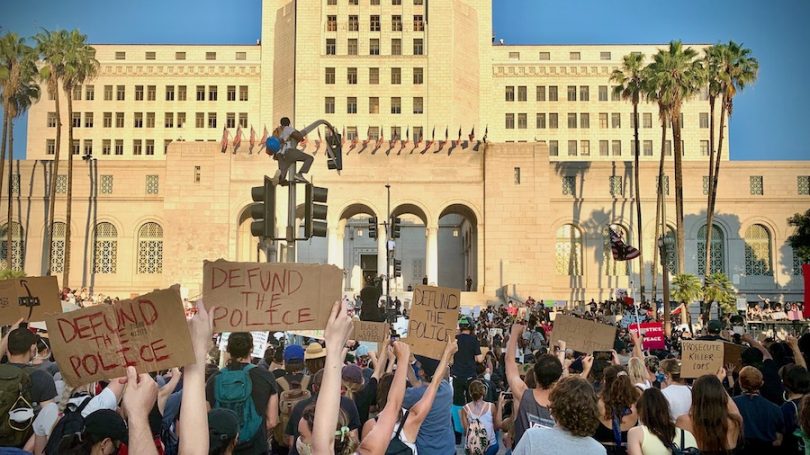 After more than two weeks of protests ignited by George Floyd’s death under the knees of Minneapolis police — protests that rippled out from Minnesota to spread across the country and world — local and state leaders began to respond to the public demand for justice with police reform proposals. Advocates say far more must be done to protect black lives, however.

On Friday, California Governor Gavin Newsom announced that state police would no longer be trained to use the carotid chokehold on civilians. Additionally, Newsom said he would work with state legislators to craft a bill to ban the carotid hold statewide.

“We have a unique and special responsibility here in California to meet this historic moment head-on,” said Governor Newsom. “I am proud that California has advanced a new conversation about broader criminal justice reform, but we have an extraordinary amount of work left to do to manifest a cultural change and a deeper understanding of what it is that we’re working to advance.”

The governor also called for the development of new use-of-force standards for protests in response to reports (and videos) of officers around the country shoving and hitting protestors and shooting rubber bullets and chemical spray bombs into crowds.

California lawmakers moved quickly, announcing they would introduce a bill to regulate the use of rubber bullets. The legislators intend to “set clear standards on how these harmful projectiles should, and shouldn’t, be used by law enforcement.”

Yet advocates say reforms are not enough, and that police agencies must be defunded so that the billions spent on traditional policing instead fund intervention workers, mental health services, youth mentorship, and other social services that are severely underfunded.

At the county level in Los Angeles, an Alternatives to Incarceration Workgroup (ATI) began working early last year to create a roadmap for a new countywide system designed to provide “care and services first,” and to use jail as the last resort.

This March, the LA County Board of Supervisors voted unanimously to accept a 98-page report from the 25-person ATI Workgroup and to move forward with implementing the report’s proposed changes to the justice system.

This ATI group was made up of representatives from several county agencies — including two from the LASD — plus justice advocates, and members of LA County’s various communities. It was led by Dr. Robert Ross, head of the California Endowment, and voting members included Professor Kelly Lytle Hernandez, Director of UCLA’s Ralph J. Bunche Center for African American Studies (and it’s Million Dollar Hoods project), Peter Eliasberg, Chief Counsel of the ACLU of Southern California, and Eunisses Hernandez, Los Angeles Campaign Coordinator of JustLeadershipUSA.

With input from dozens of organizations including the Anti-Recidivism Coalition, A New Way of Life, Dignity and Power Now, Homeboy Industries, Reform LA Jails, the Vera Institute of Justice, Youth Justice Coalition, and other local groups that have been working on policing issues for years, the ATI Workgroup came up with 114 recommendations for overhauling how public safety is achieved in Los Angeles.

More than half of the recommendations were to increase the use of alternatives to incarceration that are already in place in LA County.

For example, the report called on the county to greatly expand community-based care for Angelenos, partly by increasing LA’s use of decentralized, trauma-informed service centers where individuals and families can access mental health care, urgent psychiatric treatment, housing services, substance use treatment, and more.

The workgroup also recommended that local leaders take action to eliminate pretrial detention — and reliance on incarceration in general, which has created a jail population that is full of people experiencing homelessness, mental illnesses, poverty, and other challenges that are better served in the community, instead of exacerbated behind bars. The jail population is also disproportionately black. While just 9 percent of LA County’s residents are black, black people make up 29 percent — nearly a third — of the jail population.

The ATI report stressed that LA County should boost its use of non-law enforcement groups to respond to people experiencing mental illness or substance use disorders, homelessness, “and other situations caused by unmet needs.”

Despite not being mental health, homelessness, or substance use disorder experts, law enforcement officers have long been forced to step in and address these unmet needs in the community. This has meant that far more people must come in contact with police instead of service providers, and face arrest and criminalization instead of support.

Amid the protests, a campaign demanding the Los Angeles Sheriff’s Department and law enforcement agencies across the country implement eight use-of-force policy changes picked up momentum. People carried signs through LA’s streets urging the adoption of the “#8cantwait” strategies proposed by Campaign Zero, a movement led by activists DeRay Mckesson and Sam Sinyangwe.

The 8 policies are as follows:

– Restrict or prohibit the use of chokeholds, strangleholds, and carotid restraints

– Require officers to de-escalate situations, when possible, before using force

– Require officers to give a verbal warning before using deadly force

Last week, LA County supervisors drafted a motion that would call on the LA County Sheriff’s Department and the 46 police departments in the county to adopt any of the 8 reforms that were not already department policy. The motion was quickly held, however, as a growing number of critics spoke out about the pitfalls of the campaign.

According to Campaign Zero, each of these individual measures, when implemented by a law enforcement agency that had no such policy, was associated with fewer police killings.

Dignity and Power Now says, however, that the 8 recommended changes amount to “token resolutions” that “undermine” the efforts of the ATI Workgroup and others. The ATI recommendations, moreover, were developed with the input of communities and families, as well as criminal justice system experts and advocacy groups.

Beyond that, some of the #8cantwait policy changes – like the ban on firing into moving vehicles – are already in place in various police departments across the county. Yet, law enforcement officers still fire into vehicles, for example.

Other rules included in the #8cantwait actually would give police more discretion to use force, rather than less, according to a statement from Black Lives Matter, the Los Angeles Community Action Network, and Stop LAPD Spying.

“Under the guise of limitations or calls for ‘de-escalation,’ these reforms give officers discretion to decide for themselves when de-escalation is possible or when they have exhausted reasonable alternatives to deadly force or when their level of force fits within the continuum,” the three organizations wrote. “That discretion means no change from current policy. These reforms would usher more money into law enforcement for training purposes to create the appearance of participation and compliance.”

Instead, BLM, LACAN, and SLS say local governments must transfer funding away from law enforcement and toward community-based interventions, prosecute cops who kill, as well as those who stand by while their colleagues kill, ban police unions from contributing to campaign funds for local district attorneys, get rid of the “qualified immunity” protecting police from legal consequences, end community policing programs that put police in the role of social worker, and more.