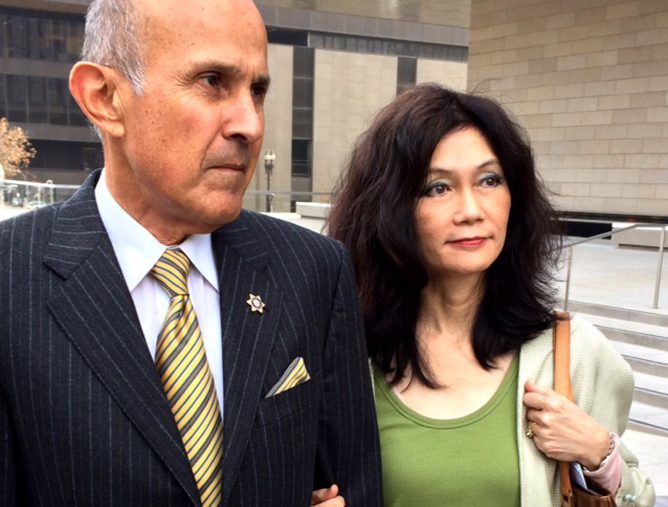 THE TRIAL OF LEE BACA: The Prosecution Rests With a Window Into Baca’s Anger, and the Defense Works to Counter the Image

As the prosecutors worked to complete their “heartbeat of the conspiracy” theory of the case against the former sheriff, Birotte’s testimony provided a dramatic finish.

Then, on Friday, the defense team began calling their own witnesses, (a process they began briefly the afternoon before). One of the first to take the stand was Michael Genneco the former federal civil rights attorney who now heads up the Office of Independent Review, which for years provided oversight of the sheriff’s department, but could not seem to stop the ongoing abuse in the jails. Baca’s attorneys likely hoped Gennaco would contradict—or at least substantially reframe—any damage Birotte had done to their client’s case.

More on the defense and Gennaco later, but first about Birotte.

Prior to being nominated for the federal bench by Barack Obama on April 3, 2014, Andre Birotte was the U.S. Attorney, which means he was the chief federal law enforcement officer for the Central District of California, a district that is comprised of seven counties, from San Luis Obispo County to the north to Orange, San Bernardino and Riverside counties to the south and east. Before being the U.S.A., Birotte was the Inspector General of the LAPD—AKA the LA Police Department’s watchdog.

Early in his testimony Judge Birotte made it clear that he had personally authorized the FBI’s undercover investigation delving into allegations of abuse and corruption by deputies against inmates in the county’s jails.

Birotte said he became aware of “allegations of excessive force” that could constitute a pattern of abuse inside the jails based on various reports, including the accounts of inmate put out by the ACLU. When the allegations and reports of abuse and other wrongdoing kept on coming he okayed the FBI’s proposed undercover operation “to see if any deputies” working in the large, old and chronically troubled Men’s Central Jail were provably “engaged in corruption,” by running a sting to see “if a deputy would take a bribe for bringing in contraband.”

At least one deputy—namely Gilbert Michel— took the bait. And, as the probe progressed Birotte said he felt it was appropriate to let it remain undercover.

Furthermore, it was Birotte who made the decision not to inform the officials of the Los Angeles Sheriff’s department that the LASD was the subject of an undercover investigated by the feds.

“I didn’t think it was proper to notify the head of the agency that we were investigating,” he said. “We wanted to preserve the integrity of the investigation.”

This decision did not please former sheriff Lee Baca, who—according to Birotte, after he became aware of the investigation and of the existence of confidential informant, Anthony Brown—made his feelings clear in a variety of ways.

For one thing, Baca asked for a meeting with the U.S. Attorney, which took place on August 29, eleven days after Baca first learned of the existence a contraband cell phone that was linked to the FBI along with confidential informant/jail inmate Anthony Brown.

Birotte said Baca specifically asked that the FBI be excluded from the meeting.

The former sheriff was accompanied to the meeting by undersheriff Paul Tanaka, Michael Gennaco, of the Office of Independent review, and County Counsel, in other words, the LASD’s lawyers.

“But it was Lee who did most of the talking,” said Birotte.

“He was very unhappy about the [FBI’s] investigation.

IS ONE OF MY AGENTS ARRESTED?

Birotte recalled the afternoon, a little over ten days after that first the meeting, when he got a call from the Chief of Public Corruption in his office, a man named Lawrence Middleton.

“The LAPD are outside an agent’s door,” said Middleton. He meant the door of Special FBI agent Leah Marx.

Weird, Birotte thought, and called his friend Earl Paysinger, who was then Assistant Chief of the Los Angeles Police Department.

Paysinger said knew nothing about such an action.

Then Middleton called back. It wasn’t the LAPD, it was the LASD.

“When he said that, I thought, ‘Oh, God. Okay.’” Birotte told the court adding, “ “Quite frankly things were tense” between the federal agencies, “and the LASD.”

Birotte called Baca on the sheriff’s cell to find out what, in fact, was true.

“Is one of my agents getting arrested?” If so, he needed to know, said Birotte.

According to the judge, in what phone records show to be a 22-minute phone call, Baca told him that, no, there would be no arrest of Marx, suggesting that Baca assuredly knew about the approach to Marx by two of his sergeants. (The jury had, by this time, seen the video of Marx being threatened outside her home by former LASD sergeants Scott Craig and Maricella Long.) And that he likely knew about the false threat.

“The role of the department of Justice, the federal government, is to investigate crimes of this nature,” said Birotte of the undercover investigation and the LASD’s escalating reaction to it. “I never thought it would get to this point. I really didn’t.”

When Birotte and company and Baca and company met again on September 26, 2011 Baca’s anger at the FBI and the US Attorney’s office did not seem at all ameliorated, according to Birotte. To add additional tension, before the this new meeting began Baca handed a letter to Birotte, containing a surprising set of demands.

The letter, dated September 26, 2011, (which you can find here) was a remarkable document.

In it, Baca expressed his continuing state of pique over a list of things. He was angry about all the subpoenas for records the department had received from the FBI as part of the feds’ continuing investigation into brutality and corruption in the jails. Baca that the FBI was, in fact, unqualified to investigate brutality in the jails, that the LASD alone had the experience and the know-how to do such an investigation.

“Due to the FBI’s aforementioned incompetence in investigating alleged civil rights violations concerning force taken by deputy sheriffs,” Baca wrote, he wanted the US Attorney and his office to “ameliorate”—AKA dial back—support from the federal investigation into wrongdoing in his jails, and instead “support the Sheriff’’s Department’s investigation to it’s conclusion.”

And, just to make sure Birotte received the message that he better get with the program and dump the FBI’s probe into department wrongdoing in favor of the LASD’s far superior work, Baca threatened to pull the sheriff’s department out of all the “many ongoing joint missions” in which the department participates with the FBI “due to the breach of trust that will take time and corrective action to heal.”

Since the August meeting, Baca’s anger about what he believed was the FBI’s wrongdoing, had gotten worse, not better. It was “the most upset I’ve ever seen him,” said Birotte.

Hoping to calm the waters, Birotte convene still another meeting the following day. This time, with only the sheriff, himself, and head of the FBI’s LA office, Steve Martinez.

“I’m the goddamn sheriff,” Birotte said Baca said, although the judge edited the exclamation to “g-d sheriff.” This is my g-d jail.

Then, at some point, as tempers were highest Birotte said Baca turned to Martinez and said, “So do you want to gun up?? In other words, he threatened an all our war between the two agencies.

Baca said he told then sheriff Baca that his views on the FBI’s undercover operation and the cell phone in the jail were “not well taken.”

“I said, Lee, look, you know we didn’t do anything wrong. Your deputies do this sort of thing all the time during investigations.

“And your deputy took a bribe.”

With Birotte, the witness stepped down and the U.S. rested.

Defense attorney Hochman told the court that his client, who had considered testifying, would not be taking the stand.

On Monday, the defense may or may not call one more witness.

Then the court will hear approximately 4 1/2 hours of closing arguments.