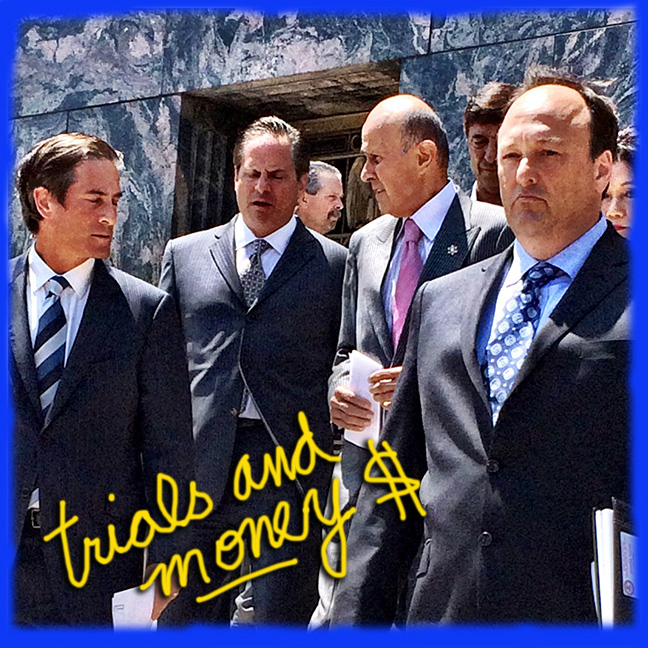 At Wednesday’s hearing, although former sheriff Lee Baca’s lawyer, Nathan Hochman, pushed for any trial to be delayed until February or March of next, after considerable debate, U.s. District Court Judge Percy Anderson set a new trial date for December 6th.

On Wednesday of this week, former Los Angeles County Sheriff Leroy Baca and his new lead attorney, Nathan Hochman, will meet on the courtroom of U.S. District Court Judge Percy Anderson for a “status conference” with federal prosecutors to discuss when Baca’s criminal trial will begin.

While the trial was originally set to begin in September, then moved to October 4, our sources tell us that new and hopefully final date will likely be in December of this year. (But we’ll let you know for sure on Wednesday.)

Baca, who is now 74-years-old, was arraigned on August 12, also before Judge Anderson, at which time he pleaded not guilty to charges of obstruction of justice, conspiracy to obstruct justice, and lying to federal officials.

The former sheriff was indicted on the three charges after he pulled out of a plea deal with the government that had been crafted back in February, in which he’d agreed to plead guilty to one count of lying in an interview with the feds in 2013. In return for his plea, government prosecutors agreed to a sentencing range of 0 to 6 months.

In July, however, Anderson blew up the deal by rejecting the maximum six month sentence. In a sober-minded but scathing series of comments to those assembled in his courtroom, Anderson said that a six-month sentence would not “fairly account for the significant harm” caused “by this defendant” and “under-appreciates this defendant’s culpability.” The guidelines agreed upon, the judge said grimly, “fail to fairly measure the culpability of this defendant….and the nature and circumstances of criminal conduct,” and would “…trivialize the seriousness of his offenses, his lack of respect for the law and the gross abuse of the public trust….”

After Anderson’s rejection of the 0 to 6 month sentencing agreement, Baca withdrew from the plea deal altogether, rather than take a chance on what promised to be a sentence from Anderson that likely would have fallen somewhere between 2-5 years in a federal prison.

But, to withdraw from the deal meant that Baca would instead go to trial, and likely face added charges—which was exactly what happened.

Now, the gigantic wild card in the eventual trial will be the issue of Baca’s cognitive health. He has, as most readers are aware, been diagnosed with early stages of Alzheimer’s disease, a diagnosis that was made public in late June (although WLA broke the news the month before).

On the day of his arraignment, Baca also filed for a change in his lead attorney. Through the course of his plea deal, and the withdrawal from it, Michael Zweiback, a former Assistant U.S. Attorney, has represented Baca.

Now Nathan Hochman will represent Baca. Hochman is also a former federal prosecutor, and the former head of the Tax Division for the US Department of Justice. While both he and Zweiback have strong CVs, they are reputed to have different personal styles when it comes to representing a client in a criminal trial.

Hochman has made it very clear that Baca’s mental state will be a significant issue when Baca goes before a jury, and that the defense will explore whether there was any “cognitive impairment,” during the period of the summer and early fall of 2011, when the alleged actions occurred that are the basis of the obstruction of justice charges, and in 2013, of course, when Baca was interviewed by the feds, and allegedly lied.

During the arraignment, Judge Anderson, who was appointed to the federal bench in 2002 by George W. Bush, repeatedly asked defendant Baca if he understood the proceedings. Baca replied that his mind was “clear enough” but also added that he had a “cloudiness in my brain and I’ve had that for quite awhile.”

When the case goes to trial, the government is expected to have its own witnesses who suggest that, while the former sheriff may be eccentric, he cognition and memory were fully operative during the periods in question.

Both Baca’s present and past attorneys have strongly hinted (but not outright stated) that they will do what they can to have Judge Anderson removed from the former sheriff’s case, pleading that Anderson is biased against Baca.

THE COST OF DEFENSE & THE PITCH FOR FUNDS

Trials are, of course, very expensive, and with this in mind, the former sheriff’s wife, Carol Baca, has recently sent out fund raising emails to friends in her husband’s behalf, two versions of which WitnessLA has obtained. (The LA Times’ Joel Rubin was the first to report on the emails’ existence.)

In one of the emails, Mrs. Baca wrote in part:

“The attorney fees for this defense will be substantial, well over $1 million, in addition to the large amount of money we have already spent on Lee’s legal fees. As a result, we are reaching out to our family and friends to help Lee beat these charges. Lee is in the fight for his life given his Alzheimer’s disease, and he hopes he can count on you to help him have the resources for this fight.

“There are two ways to contribute to help Lee. Any person can donate as a gift to Lee a maximum amount of $14,000 a year tax-free. In addition, we are setting up a legal defense fund that can accept contributions without limit (more details to follow).”

On the subject of legal bills, except for Paul Tanaka, nearly all of the other 21 Los Angeles Sheriff’s Department members who have been convicted by the government in the course of the multi-year federal investigation into corruption and brutality inside the LASD, have been provided attorneys by either the Association for Los Angeles Deputy Sheriffs (ALADS), or the Professional Peace Officers Association (PPOA).

(James Sexton was the exception among the deputies who faced federal charges, as ALADS declined to pay even a portion of his bills, for reasons that make up their own disheartening tale.)

So, would Baca be eligible for any help?

We asked PPOA president, Brian Moriguchi, what he thought about whether either union could or would pay any of Baca’s bills, and he told us that “any full-member of our association in good standing is entitled to representation or financial support, regardless of whether their rank is a deputy sheriff or the sheriff himself.”

PPOA, he said, has provided financial assistance “to all of our members who were indicted related to this matter.”

Since we called Moriguchi on Sunday, he could not easily check whether or not Baca was, in fact, a full member. But if he is, Moriguchi said, “he is entitled to the same member benefits we afford all of our members, including financial assistance.”

Paul Tanaka, he said, “did not received any financial support from PPOA because he was not a member of our association.”

For the record, Mr. Baca receives roughly $328,000 annually in pension and benefits. In 2013, his total salary plus benefits was $490,727, according to Transparent California.