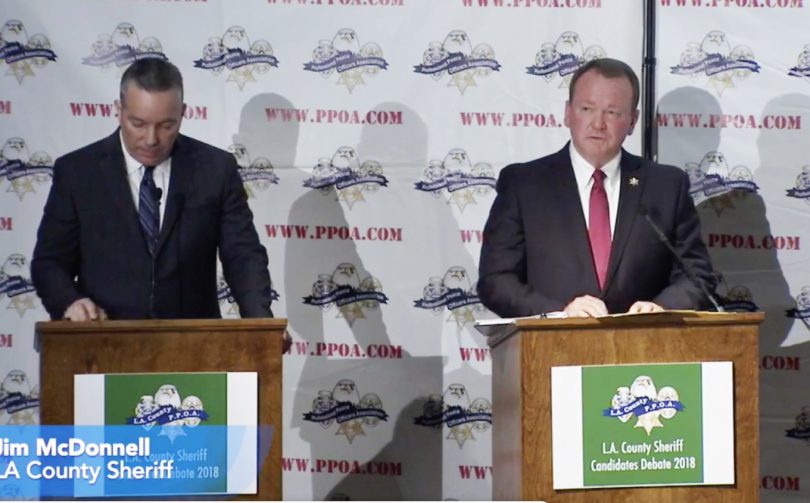 Written by Celeste Fremon
On Thursday, the Los Angeles County Professional Peace Officers Association (PPOA)—the main union for the LA County Sheriff’s Department’s supervisors– announced that it has endorsed Jim McDonnell for a second term as sheriff.
This comes after a June primary in which McDonnell was expected to cruise to an easy victory—despite two contentious challengers.  There was, however, no easy victory at all.

Instead, a retired department lieutenant named Alex Villanueva managed to get 33.20 percent of the vote, to incumbent Jim McDonnell’s 47.87 percent—suddenly turning the so-called easy cruise into an aggressively contested horse race.

McDonnell’s numbers were not helped by the fact that candidate number three, Bob Lindsey, got a respectable 18.9 percent of the vote, buoyed by a strong following among the rank and file of the LASD, plus  $330,000 in his war chest, and additional $410,000 from a group of independent supporters.

This past July, when WLA talked to PPOA President, Brian Moriguchi, about the race, he told us that he believed Villanueva had a real chance at an upset.

“Alex did what we never thought he could do,” Moriguchi said. “So now we see this as very competitive race.”

Since then, however, PPOA has conducted a thorough examination of both candidates, which included an extensive video interview with each man, and a lively debate between McDonnell and Villanueva hosted by the union, which featured outright shade-throwing from both of the candidates.  Post debate, the union polled its membership for their views on the two contenders.

The result was, out of  7,389 ballots mailed to members, 394 endorsed McDonnell, 365 endorsed Villanueva, with 115 marking their ballots as “no endorsement.”

PPOA then took one more step by hiring a professional firm to do a public poll, hoping get an idea of how both candidates were faring with regular voters.

All of these elements reportedly factored into PPOA’s endorsement committee’s final decision..  (This year’s committee consisted of 21 PPOA members “from a variety of classifications,” both sworn and civilian.)

“We believe Jim McDonnell is the best-qualified candidate for sheriff,” said Moriguchi in a statement that accompanied the union’s announcement. “His executive experience as the incumbent sheriff, chief of Long Beach Police Department and assistant chief at LAPD far exceeds that of his opponent and is necessary in leading a department of this size.”

In our own exchange of emails with Moriguchi, he explained some of the additional nuances of the decision.

“We are aware there are some employees who are unhappy with Sheriff McDonnell,” he wrote. “But our decision is based on who, of the two candidates, is best qualified to run the largest sheriff’s department in the world.

There were still many issues that need to be addressed, Moriguchi admitted, “such as recruitment, unfair treatment of employees and the promotion process.”  But the union leadership is “confident” that McDonnell “will address these concerns” in his second term.

“We conducted a thorough process to come to our conclusion,” Moriguchi wrote.  He was proud, he said,  of PPOA and the endorsement committee “for examining every aspect of both candidates, and coming to a just conclusion on who is best to lead this department.”

It is important to point out that PPOA’s endorsement is not a small matter, especially in that the committee gets to decide whether PPOA wants to give money to its candidate of choice, and if so, how much?

(PPOA has a seven figures worth of funds it could theoretically offer to a candidate.)

Thursday evening Moriguchi told us that, yes PPOA definitely would be giving Sheriff McDonnell some funds, But they had not yet decided how much.  But it would be “a reasonable amount.”

As the race heats up later this month and next, we’ll keep you posted on further developments.