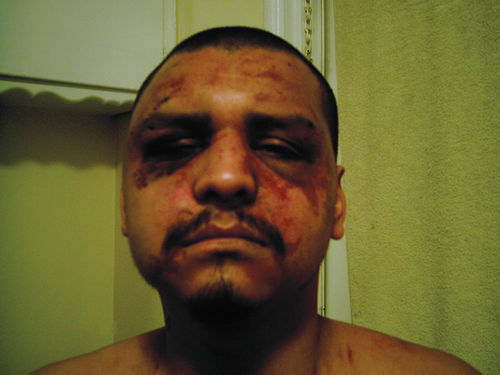 On Monday, a federal judge sentenced former Los Angeles County sheriff’s deputy Noel Womack to nine months of home detention and 640 hours of community service for his part in a conspiracy to cover up the brutal beating of a handcuffed visitor to Men’s Central Jail in 2011, City News Service reports.

Womack and other deputies pinned the beating on the jail visitor, Gabriel Carrillo, by falsifying official reports, thus causing Carrillo to be criminally charged as the aggressor. Carrillo denied that he had attacked the deputies. Carrillo said he had been handcuffed during the beating, during which deputies reportedly kicked and punched Carrillo’s face and body, and shot OC spray at him. Originally, the deputies involved, including Womack, said that Carrillo tried to attack the officers, leaving them no choice but to take him down. The bogus charges—battery, resisting, and trying to escape arrest—could have resulted in a fourteen-year prison sentence for Carrillo, had the case not been dropped. (Backstory: here, here, and here.)

Deputies assaulted Carrillo after they found he had brought a phone into the visiting area, despite phones being clearly prohibited and worthy of a misdemeanor charge.

Womack’s plea bargain required that he resign from the LASD and never work in law enforcement again. (By the time he testified, Womack had worked for the department for eight and a half years.)

Womack is one of six deputies prosecuted for the Carrillo beating and cover-up. A jury convicted Sgt. Eric Gonzalez and Deputies Sussie Ayala and Fernando Luviano for their parts in the violence. Womack and another deputy, Pantamitr Zunggeemoge, took plea deals. Their testimony was crucial to the prosecution’s case against the others involved.

Under the terms of his agreement, Womack admitted to lying, and gave the prosecutors a new version of the 2011 encounter. The deputy also agreed to plead guilty to a felony charge of lying to federal agents.

The sixth deputy, Byron Dredd, is being retried on a charge of lying to FBI agents after a jury acquitted him of conspiracy and writing a false report.

Thanks to relentless pushing by ABC7 Eyewitness News, and an order from the 9th Circuit Court of Appeals, the public now can watch video of a 2008 incident in Men’s Central Jail, in which LA County Sheriff’s deputies forcefully “extracted” inmates from their cells, sending 19 of the 21 inmates to the hospital with fractured limbs, eye sockets, noses, and skulls. (At the same time, although the deputies testified that the inmates attacked them—thus necessitating as many as 20-to 30 blows against certain inmates—-no deputies sustained any injuries, either large or small.)

KCET was first to publish the newly released footage.

Yet it was ABC7 Eyewitness News, led by investigative producer, Lisa Bartley that persuaded the court to release “dozens” of alarming videos pertaining to a federal civil case against Los Angeles County. The ABC7 team pressed for the release “in part because the incident has already cost L.A. County taxpayers millions of dollars in damages and attorney fees – and the costs are still mounting because the case is on appeal,” according to Bartley.

A federal jury awarded a total of $740,000 in what are called “actual damages” to five inmates, and found that 27 Los Angeles Sheriff’s deputies were liable for using excessive force when they reportedly shocked, kicked, and repeatedly struck the group of inmates. One inmate, Carlos Flores, lapsed into a coma after blunt trauma to the head, a fractured eye socket, and a possible “strangulation injury.”

The same jury also voted to award punitive damages for actions by the deputies that the jury members deemed “malicious,” “sadistic,” and “reckless.” With the punitive damages, the total damages levied against LASD personnel involved came to $950,000 (plus more than $5 million in legal fees).

US District Judge Consuelo B. Marshall sealed the videos after the county’s attorneys insisted that releasing the footage to the public would negatively impact the county during the appeal process. Earlier this month, the 9th Circuit ordered the nearly decade-old images released, in response to the ABC7 requests, although the Los Angeles Sheriff’s Department opposed the release of the footage.

“The public needs to see what happens when we let law enforcement have its way without oversight and accountability mechanisms,” Peter Eliasberg told KCET’s Dina Demetrius.

LASD Not Yet Fully Compliant With Prison Rape Elimination Act

Now five years after those standards were established in 2012, the Los Angeles Sheriff’s Department has not yet come into full compliance with PREA, according to a story by KPCC’s Frank Stoltze.

Once the US Department of Justice began enforcing the federal law, the idea was that if states did not pass an audit, or chose to forego it (note: Texas), the would forfeit 5% of their federal prison funding. More importantly, if an inmate if a sexually abused inmate brings a lawsuit against a state, non-compliance with PREA may be viewed as deliberate indifference.

And counties that are found to be out of compliance may also be precluded from receiving federal grants and contracts, face DOJ scrutiny, and experience increased liability costs, according to Just Detention International, an LA-based group hired by the sheriff’s department to assist with implementing the PREA standards.

In September, LASD Deputy Giancarlo Scotti was arrested on two counts of rape and oral copulation, both under color of authority. Scotti allegedly raped two female inmates at the Century Regional Detention Facility in Lynwood. KPCC’s Frank Stoltze reports that this arrest prompted an inquiry into the measures taken by the LASD to prevent rape behind bars.

“There are strong, committed leaders at the Sheriff’s Department who take sexual abuse very seriously, but this case is a chilling reminder of how much more work needs to be done to end this violence,” Lovisa Stannow, Just Detention International’s Executive Director said after Scotti’s arrest.

Approximately 3.5 percent of jail inmates are sexually assaulted by other inmates or guards, according to a federal survey, Stoltze said. That would mean that around 600 inmates in the care of the LASD face assault each year.

The sheriff’s Custody Services Director Karen Dalton says the department is making progress toward its PREA goals, and has set up an anonymous assault hotline for inmates, among other efforts.

The matter of LASD compliance is slated to be addressed Thursday during the sheriff’s civilian oversight commission meeting.