He was “one of the really good ones,” Deputy Joseph Solano’s cousin, told the Los Angeles Times.

Dinnell La Barbara, said the LA County Sheriff’s Deputy, provided for his sister and mother, which was typical of his generous nature.

“He would have stood in for anybody. If anyone was in trouble he would have sacrificed his life,” she said. “He wasn’t afraid. He was the type to intervene.” 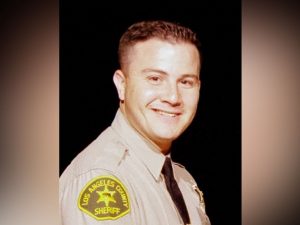 But now, after two days on life support, while medical staff tried “for a miracle,” Deputy Solano has died, LA County Sheriff Alex Villanueva told reporters at a 6 p.m. press conference on Wednesday night, seeming very shaken up himself.

“On a good day, we can do heroic things, and save lives, and avoid death,” said the sheriff. And “other times something as innocent as going to a fast-food restaurant can be end of watch for our hero, Deputy Solano.”

Villanueva said he didn’t know the 50-year-old Solano, but got a feeling for him from the reactions of those close to the man, both family and colleagues.

“I could see the tears of all of his co-workers when they were in the hall outside his ICU room,” Villanueva said.

As most readers know by now,  at approximately 5:45 p.m. Monday night, Solano,  a 13-year veteran of the department, who was off-duty at the time, was approached by the 30-year-old suspect who—after seeming to follow the deputy—walked up behind Solano as he stood in line waiting for some fast food at a Jack In The Box restaurant in Alhambra, and shot him in the back of the head. 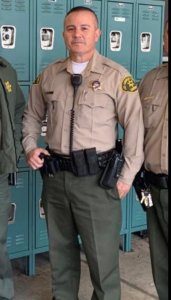 Solano was dressed in casual clothing after dropping his mother’s car off at a nearby Jiffy Lube, reportedly wearing nothing that identified him as law enforcement, when Rhett McKenzie Nelson, who is from Utah, opened fire.

So far no one seems to know anything about the motive for the shooting.

Nelson, who reportedly drove away from his parents home in St. George, Utah, on May 25, and was considered missing since then, until he called his father the day after shooting Deputy Solano, from a Long Beach, CA,  church,  and reportedly talked about “committing murder in Southern California,”—or words to that effect.

It is believed that Nelson also shot and killed another man in downtown LA, less than an hour before he shot Salono.

According to the LA Times, Nelson had been diagnosed in the past with a mental illness and had also struggled with opiate addiction, yet his parents “indicated he’d never been violent” Capt. Mike Giles of Utah’s  St. George Police Department told Times reporters.

(We strongly recommend you read the Times’ coverage, which continues to be excellent.) 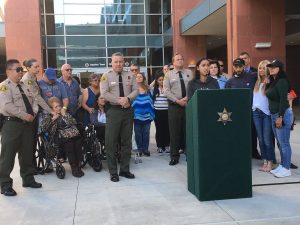 “I not only lost a father figure, but I lost my best friend. Please don’t forget about him.” Stepdaughter of LASD Deputy Joseph Solano

Deputy Salano’s family members, immediate and extended, were present at the press conference in front of LAC+USC Medical Center.  One after the other they expressed their love and loss.

Deputy Solano’s son, Matthew, struggled with tears as he thanked everyone that “has had my dad in their prayers.

“Unfortunately, we have lost him….He was a really good dad.”

At 10:30  Wednesday night, Sheriff Villanueva sent out one more message, which read in part, “With a heavy heart, and surrounded by Deputy Solano’s loved ones, I had to do the hardest thing I have ever had to do – announce the passing of one of my deputies….”

Rhett Nelson is being held without bail at the Twin Towers Correctional Facility and will be in court Thursday.

Top photo is of LASD Deputies marching in formation as fallen Deputy Solano arrives at the LA Coroner’s office, courtesy of @LASDHQ.