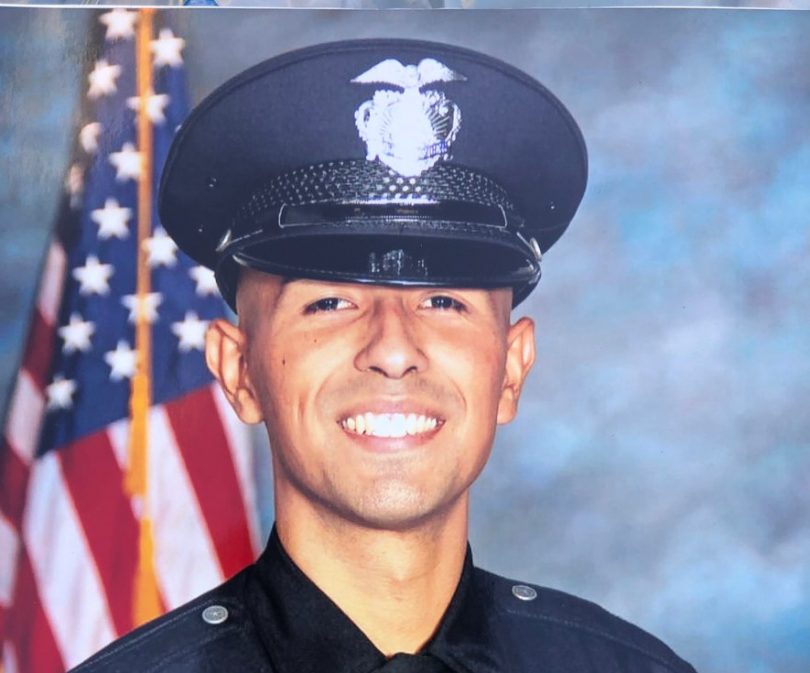 After midnight on Friday night,  a 24-year-old Los Angeles Police officer was shot and killed as he sat with his girlfriend and her two brothers at a Lincoln Heights taco stand near to Avenue 26 and Humbolt Street.

LAPD Officer II Juan Diaz, who had been a sworn member of the LAPD for about two years, worked most recently for the Professional Standards Bureau.

But on Friday night, he was off duty and having a quick and quiet meal when he was approached by a group of young men.

The Los Angeles Times has reported that the incident began when Officer Diaz noted a young man tagging near to where he and his group were sitting, and Diaz asked the tagger to stop.

Instead, a group of young men approached Diaz and friends.  They reportedly claimed the Avenues gang and said Officer Diaz and company were in their territory. One reportedly flashed a gun at his waistband as the group began making threats.

When the victim and his friends attempted to solve the problem by getting into their car and leaving the area the aggressors reportedly opened fire hitting the officer and one of the brothers.

Just before 1 a.m., a bystander flagged down an LAPD motorcycle officer and reported the shooting in the area of Avenue 26 and Artesian Street. The officer called for back-up, and subsequently discovered two victims suffering from gunshot wounds, one of whom was Officer Diaz. The other was his girlfriend’s brother.

The brother was taken to the hospital where he was treated. But the young officer was pronounced dead at the scene. 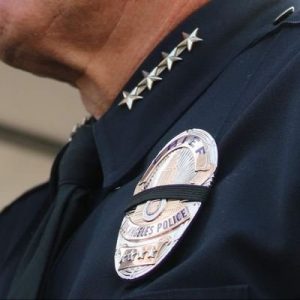 This photo of a black-banded LAPD badge shows Chief Michel Moore with his own badge striped with the traditional black band expressing honor and grief for a fellow-officer. It appeared on the chief’s Twitter feed first thing Saturday morning.

“We mourn the tragic loss of a young officer in an act of senseless violence,” LAPD Chief Michel Moore tweeted on Saturday morning.

Moore, who is out of the county at the moment, asked for the public’s help in finding Officer Diaz’s killer. (Assistant Chief Girmala is the acting chief in Moore’s place.)

“My sincere condolences go out to the LAPD family for the tragic death of one of their officers.” tweeted LA County Sheriff Alex Villanueva. “We are here to support our brothers and sisters at the LAPD in any way we can. Our thoughts and prayers go out to the family and friends.”

Mayor Eric Garcetti also tweeted repeatedly about Officer Diaz. “Words cannot match the depth of sorrow that Angelenos are feeling today,” said the mayor. “The senseless murder of Officer Juan Diaz is a shocking reminder of the dangers that LAPD officers face every moment they wear the badge, and the absolute courage and selflessness with which they uphold the oath each day.” 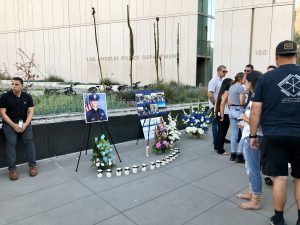 Our hearts are with Officer Diaz’s family and friends. They are experiencing a loss that no one should have to suffer, under circumstances that outrage us all. My promise is that we will hold them close, stand with them every step of the way — and never tire until we find and prosecute the vicious criminals responsible for this horrific tragedy.”

On Saturday night, colleagues and family of the young officer who had barely begun what friends and co-workers believed would be a bright career gathered for an emotional vigil in front of the LAPD’s downtown Los Angeles headquarters. 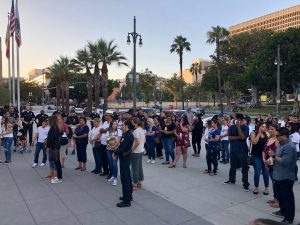 Juan Diaz’s sister, Anahi, spoke to the crowd, telling them her brother had always wanted to be a police officer. Diaz was a son sandwiched in between two daughters in his family, and a man who loved his city. Their mom and dad were “broken,” Anahi Diaz told the crowd.

The murder of Officer Diaz has painful echos of the 2008 murder of well-liked Los Angeles County Sheriff’s Deputy Juan Abel Escalante, who was gunned down outside his boyhood home in Cypress Park by Avenues gang members as he was headed for work at Men’s Central Jail. The tragic killing of Deputy Escalante was ultimately believed to be a case of mistaken identity.

Former New York City Police Commissioner and former LAPD Chief Bill Bratton was one of those who immediately expressed sorrow over the death of Officer Diaz.

“My deepest condolences to the @LAPDHQ family and the loved ones of Police Officer II Juan Diaz. Officer Diaz led a life of significance – a life dedicated to service.”

The search for the killer or killers of Officer Juan Diaz is ongoing.

For the best up to the minute news regarding LAPD Officer Juan Diaz’s murder we recommend you follow the reporting of Los Angeles Times reporters Richard Winton, Alene Tchekmedyan, and Angel Jennings who with the help of colleagues is publishing ongoing updates.