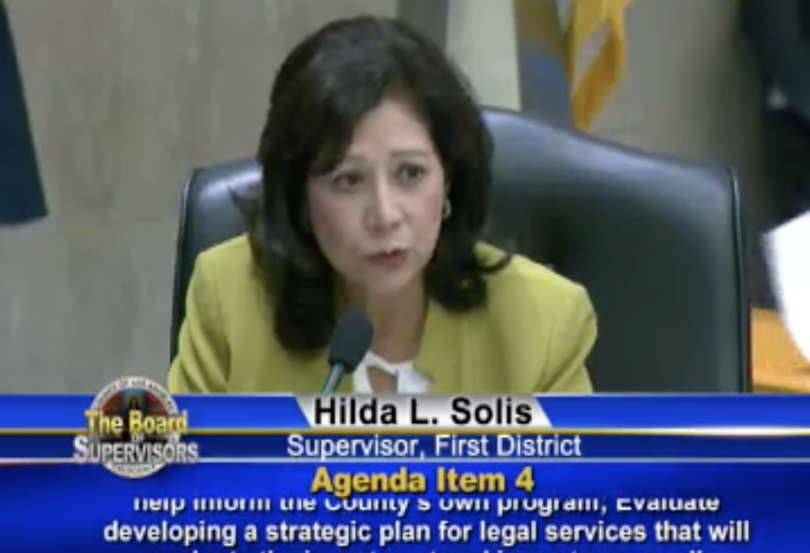 On Tuesday, the Los Angeles County Board of Supervisors unanimously passed a motion to study the feasibility of creating a Civil Defense Unit to be operated by the LA County Office of the Public Defender in partnership with community-based organizations that will “provide legal representation and advocacy” to the county’s residents.

The motion, authored by Supervisor Hilda Solis and seconded by Supervisor Kathryn Barger, calls on the county CEO Sachi Hamai, Public Defender Ricardo Garcia, Joseph Nicchitta, Director of the Department of Consumer and Business Affairs, and other relevant county department leaders to return to the board in 120 days with recommendations for the unit’s design, implementation, and funding.

Civil defense programs elsewhere in the U.S. “have demonstrated their effectiveness in promoting public safety, maintaining stability in the home and in communities, preventing homelessness, and much more,” said Supervisor Solis.

The county, in partnership with the city and local philanthropy and legal aid organizations, is currently piloting the LA Justice Fund, which provides legal assistance to immigrants facing deportation. While the project may soon expand to include support for tenants in need of legal help, there are many other areas in which people coming into contact with the public defender’s office could benefit from representation. Supervisor Solis believes that help should come from a cohesive civil defense unit.

Speaking before the board on Tuesday, LA County Public Defender Ricardo Garcia praised the plan.

Providing “representation for my clients within the civil justice system is so critical and forward-thinking,” Garcia said.

After law enforcement, public defenders are the first to have guaranteed access to an individual after an arrest — usually within 72 hours of that arrest. “No other community organization or government department has this sort of timely access with the incarcerated population,” the motion stated. “No other entity can ascertain the civil justice needs of the justice-involved, while simultaneously protecting” individuals’ constitutional rights to privacy.

“We are in a unique situation as public defenders to address these fundamental collateral consequences” that result from involvement with the criminal justice system, Garcia told the supervisors. “When we talk about holistic representation, we often think about” ways to address defendants’ rehabilitative needs and mental health while providing legal representation in criminal cases, Garcia said. However, what rarely enters the conversation about holistic representation, according to the public defender, is how to mitigate the collateral consequences triggered by an arrest — consequences that reduce defendants’ likelihood of successful reentry and create hardship and instability for the loved ones they leave behind.

Indigent defendants and their families in LA County often face housing instability and eviction after an arrest, lost employment, an abrupt end to benefits for their families, and more.

One example of a post-arrest collateral consequence, Garcia said, was the impounding of a family car. Defendants seek help from the public defender’s office to get their vehicle out of impound and back to their family members, who often need the car to get to work. In one case, by the time Garcia’s office could connect the client with an outside service to get his car turned over to a loved one, the impound cost had reached $3,000 — a fee so enormous that the man’s family was forced to give up their vehicle forever. “If we could have done the same thing within the first 24 to 48 hours” of the client being incarcerated, Garcia said, “that family would have the car” and a means of transportation to work.

Veterans, too, frequently request additional assistance from their appointed defenders — help that the PD’s office can’t give. “I can’t tell you how many times the veterans come in with fear and concern” that they and their families are going to lose their benefits, and thus, their homes. By the time Garcia’s office can get them help to transfer their benefits to another family member, “one, two, three paychecks have passed,” said Garcia. “The rent’s overdue. There’s not much food in the house.”

These all-too-common stories and situations affecting public defender clients and their families reveal a great need for better and quicker access to civil legal resources, according to Garcia.

“Section 6, paragraph 23 of the County Charter provides authority for the County’s Public Defender to ‘defend such persons in all civil litigation in which, in his judgment, they are being persecuted or unjustly harassed,’ Solis wrote in her motion. “Until such time as the rampant disparity in access to civil justice, based on economic means, is obliterated, the Public Defender’s civil representation of the indigent population is indeed the representation of the unjustly harassed.”

“I look forward to the results of this study and the creation of this new unit which has the potential to lift up our residents, whole families, and diverse communities throughout the First District and Los Angeles County,” Solis said.