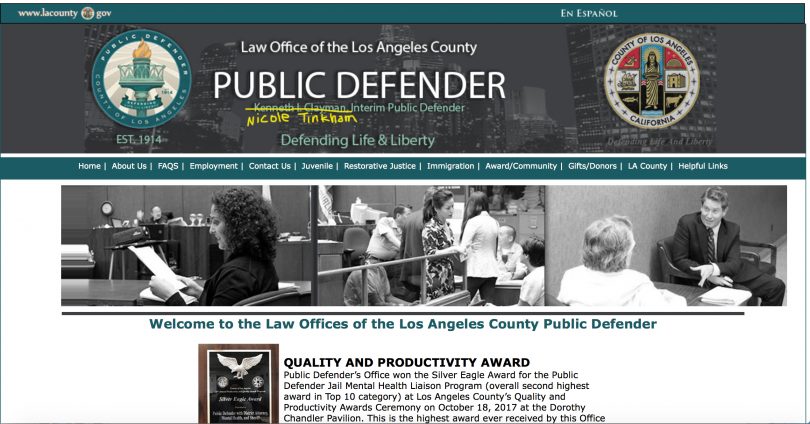 On Tuesday, the members of the Los Angeles County Board of Supervisors voted unanimously to appoint lawyer Nicole Davis Tinkham as the new interim head of LA’s Public Defender’s office.

The vote to appoint Tinkham—who, until her new appointment, has been the senior deputy county counsel in the office of County Counsel—took place despite impassioned objections from many of the deputy public defenders whom the new head PD will oversee for at least the next six months. The deputy PDs contend that their new boss is the wrong person for the job for several reasons, the primary reason being the fact that she has no experience in the world of criminal defense, or in criminal law in general. Furthermore, they said, Tinkham has a past of defending law enforcement clients in civil rights cases, and one of her best-known repeat clients is the Los Angeles County Sheriff’s Department, which critics of her appointment contend presents a potentially troubling conflict of interest.

It was Tinkham, for example, who represented the sheriff’s department in a high profile civil case, Fetters v. County of Los Angeles, in which a sheriff’s deputy shot a 15-year-old Palmdale boy who was riding his bike holding a toy gun. (The deputy said the teenager failed to drop the realistic looking toy weapon, when asked to so. The civil jury found otherwise.)

A few days before the board meeting, 390 out of the agency’s approximately 700 deputy public defenders who would work for Tinkham, signed a letter that expressed misgivings about Tinkham’s lack of experience in criminal law, and her past instances of representing the LASD.

Then, at the Tuesday board meeting, six experienced deputy public defenders addressed the board and asked the supervisors to reconsider their choice.

“Me and my fellow deputy public defenders suit up and show up every day to be the guardians of justice and to uphold the constitutional rights of those who are left without a voice,” said Nan Whitfield, a 30-year veteran deputy public defender who specializes in capital cases, and who was recently elected to the Board of Directors of the National Association of Criminal Defense Lawyers (NACDL). “So when I see your recommendation to name as the leader of the oldest and largest criminal defense firm in the nation,” Whitfield continued, “a lawyer who has never set foot inside a criminal courtroom to defend an indigent client, it is a kick in our collective faces. While I applaud your efforts…to drain what you perceive to be the managerial swamp of the Los Angeles County Public Defender’s Office, clearly somebody failed to think this through.”

Whitfield pointed to what she labeled “the obvious conflict of interest” of selecting an attorney “who has dedicated her career to champion the favor of the very law enforcement agency that has notoriously violated the civil rights of our client base.” But that wasn’t all, she said.

“You also chose someone who is completely unable for someone like me to consult when handling any criminal matter….”

Another who spoke was Deputy Public Defender Evan Langinger, who is the president of the Latino Public Defenders’ Association. Langinger talked about the newly pressing issue, for the PD’s office, of clients whom he said were being put at risk for deportation over “minor criminal infractions” such as “a simple DUI” or “traffic infractions” such as suspended driver’s licenses.

“We need a public defender who has worked with our clients,” said Langinger, “and who is going to have a vision for how we address this kind of problem, and other similar problems that are affecting our clients,” including “homelessness and unjust bail.”

Turmoil at the office?

Part of the board’s sense of urgency to make this appointment likely pertains to the fact that Los Angeles County has been without a permanent public defender for more than a year following the abrupt departure of the Ron Brown, in December of 2016.

Brown’s exit led to a revolving door of interim head PDs. Most recently, the office was run on a temporary basis by Kenneth Clayman, a veteran public defender from Ventura County whom everyone seemed to like, at least as a placeholder, but whose contract precluded him from holding the short-term position for more than 120 days.

In addition to the dearth of a permanent leader for the office, the organization has reportedly been plagued, as Jan Whitfield hinted, by organizational dysfunction causing some of the deputy PDs to complain about promotion and transfer practices. Office quarrels aside, one legal expert, Heather L. Rosing, the chairperson of the professional liability department for Klinedinst PC in San Diego, told the Los Angeles Daily Journal that Tinkham’s prior defense of the sheriff’s department could possibly cause more problems “than leaving a bad taste in the mouths of deputy public defenders.” According to Rosing, Tinkham leading the PD’s office could present a conflict that violates a section of the Rules of Professional Conduct, which states that an attorney must not accept employment “adverse to the client or former client where, by reason of the representation of the client or former client, the member has obtained confidential information material to the employment.”

The board, however, appears not to be worried.

In a letter to the rank and file public defenders, supervisor and board chairman, Sheila Kuehl, wrote that she was confident that Tinkham would bring “much-needed stability to the Public Defender’s Office during this uncertain time.” Tinkham, wrote Kuehl.

Tinkham will also, she wrote, “bring a team from County Counsel” to work with her in the PD’s office.

The board has, Kuehl continued, “a deep appreciation for the role the PD’s office plays in safeguarding the rights of the accused and ensuring a fair and equal justice system…”

The hope is, she wrote, that Tinkham’s six-month tenure will give the board the time to recruit and “identify an individual who has the skills and vision to lead the country’s largest and preeminent Public Defender’s Office.”

WitnessLA will, of course, be tracking this important issue so, as usual, we hope that you will….stay tuned.