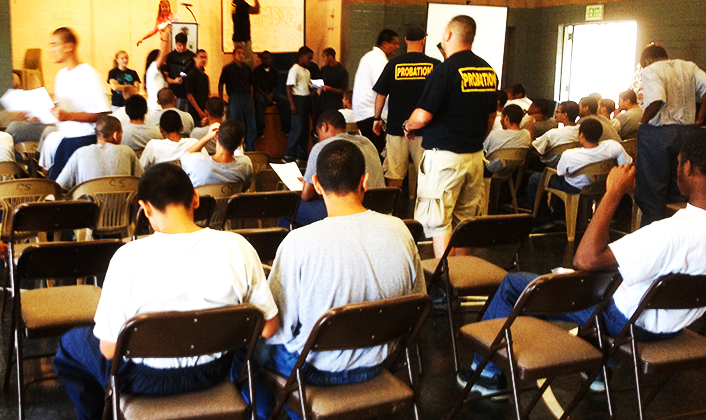 On Tuesday, Nov. 7, the Los Angeles County Supervisors are scheduled to vote on a motion determining whether or not they will give the go-ahead to a comprehensive plan for a county-wide youth diversion program designed to redirect the trajectories of thousands of LA kids who would otherwise be headed for the juvenile justice system.

Tuesday’s motion, introduced by Supervisors Mark Ridley-Thomas and Janice Hahn, is the result of an earlier Ridley-Thomas/Hahn motion approved by the board in January of this year. The January motion ordered up the establishment of committee that was, in turn, to come-up with and then present a detailed and highly-researched youth diversion strategy for the county, with the goal of “minimizing youth contact with the juvenile or criminal justice system.”

The resulting 78-page report, A Roadmap for Advancing Youth Diversion in LA County, arrived on Monday, Oct. 30. It outlines a three-phase strategy that, according to one of its authors, could have the first stage of the proposed new diversion program up and running within 18 months—or even less.

If the Roadmap is fully implemented, wrote it’s authors, it has the potential of making Los Angeles County, which has the largest juvenile justice system in the U.S., one of the nation’s “most forward thinking counties” in improving the well being of kids who might otherwise struggle with “the lifelong consequences of justice system involvement.”

Youth diversion, for those unfamiliar, is broadly defined as an intervention that, as the plan explains, “redirects system responses” to kids—meaning the responses of courts, police, and probation—in order to prevent a young person’s involvement or further involvement in the justice system.

Although there is a great deal of variation in diversion programming nationwide, a wide array of research (a good portion of it cited in the report’s appendix) has established that involvement with the justice system produces long-lasting collateral damage for young people. Justice contacts such as arrest, probation supervision, and stays in juvenile lock-ups, are not only stigmatizing for a kid, according to research, they interrupt the young person’s positive development, lead to an increased risk for dropping out of high school, along with additional childhood trauma. Even one justice system contact reportedly greatly ups the risk of further justice system contact.

This kite string of consequences too often follows kids into adulthood, affecting one’s ability to earn, leading to increased family disruption, and a markedly increased risk of adult incarceration.

According to the new Roadmap, approximately 11,000 youth arrests reported throughout Los Angeles County in 2015, “including status offenses, misdemeanors, and low-level felonies,” would have been legally eligible for diversion in lieu of arrest or citation, under the California Welfare and Institutions Code.

“Such cases,” wrote the reports authors, “could be counseled and released or diverted to community-based activities and services in lieu of arrest, following successful examples in jurisdictions such as San Francisco County, Miami-Dade County,and others.”

Yes there has been progress, but much more is needed

This is in part due to a general long-term drop in youth crime, which was helped when, through the passage of Senate Bill 81, the “Juvenile Justice Realignment Bill,” signed into law in 2007 by Arnold Schwarzenegger, the state drastically reduced and reformed its scandal plagued California Youth Authority (basically a prison system for kids), and directed that all but a very small percentage of law breaking kids be kept in California’s counties instead of far away from home in the mostly cleaned-up state facilities. But, as the Roadmap points out, the statistical change was also a product of a concerted effort by child advocates and others to reduce “youth involvement in the justice system” altogether, “through collaborative, data-driven efforts” to persuade county officials to treat low level youth misbehaviors as a flag that a kid needs help, not a reason to call in the cops.

At present, LA County Probation is working to close as many of its juvenile camps as is possible, and to turn those remaining camps and juvenile halls into therapeutic, research-guided, “trauma-informed” environments that help and heal, not punish. Campus Kilpatrick, which opened this past summer, is the flagship and pilot for the department’s new ethic. But it’s time to go farther, the report’s authors said.

Juvenile facilities are expensive, and have notoriously poor statistical outcomes. For instance, the cost per youth per year in an LA County juvenile probation camp is estimated at over $247,000, with a recidivism rate (as defined by re-arrest within one year) of approximately 33% (Juvenile Probation Outcome Study, 2017).

In contrast, there are successful LA-based community based organizations such as, Centinela Youth Services (CYS), which has partnered since 2013 with the Los Angeles Police Department on a restorative justice diversion program that keeps kids who qualify out of the juvenile system, if they break the law. This Juvenile Arrest Diversion Program, or JADP, costs an average of $4,000 or less per youth, with a recidivism rate of 8 to 11%.

(WitnessLA wrote about the JADP program in June.)

So, diversion is cost-effective, and also benefits public safety, according to research.

With all this in mind, according to its authors, A Roadmap for Advancing Youth Diversion in LA County was written.

Another urgent reason for the new program to be voted on Tuesday, according to juvenile advocates, is the matter of racial disparities.

It turns out that, even as juvenile arrests declined throughout LA County, racial disparities have grown. Youth of color continue to be disproportionately impacted at all stages of the juvenile justice system, when controlling for offense, and represent 95% of youth in the county’s probation camps and juvenile halls.

Armed with the knowledge that too many struggling LA kids were not getting the kind of help they needed (or worse, were being outright harmed by the existing system), “in order to give every young person the opportunity to succeed,” LA’s board of supervisors unanimously approved the January 24 motion, which established an ad-hoc Youth Diversion Subcommittee (YDS) that, together with the L.A. County CEO’s office, was tasked with developing a plan to coordinate and scale effective youth diversion in the county, while also directing the County CEO to come up with a sustainable plan to fund the thing.

Supported by consultants from the non-profit research center, Impact Justice, during the last 18 months, the YDS, and others, met over 16 times to review data and evidence, and to listen to the perspectives of kids, members of law enforcement, and community organizations.

Early in the process, the YDS and company set out five basic goals for the new plan:

It will take work, the roadmap’s authors wrote. “Given Los Angeles County’s size,” such a venture will require “focus and dedication by multiple County agencies, law enforcement departments, the philanthropic and private donor communities, community-based organizations, youth, and families…”

And will it be worth it?

Ridley-Thomas and Hahn are convinced.

“Board action,” they wrote, “is now necessary to guarantee youth have access to supportive services instead of arrest and incarceration, which is morally imperative and fiscally responsible.”

We’ll let you know how the vote goes.