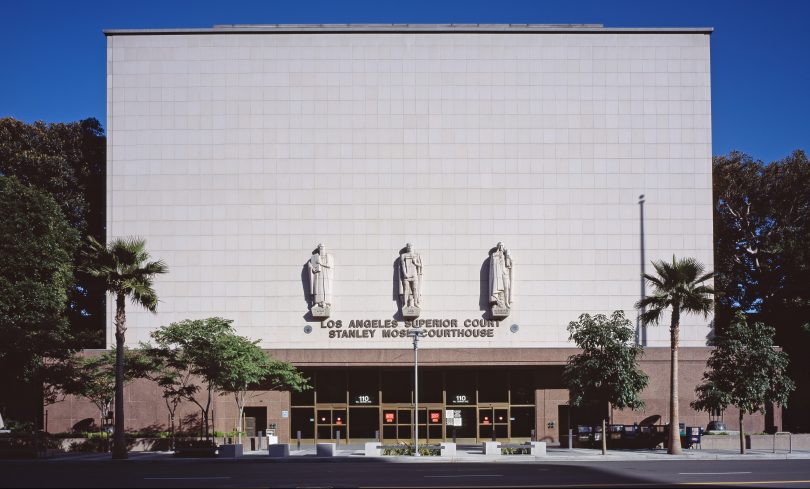 Villanueva was reportedly served on Sunday at his home with an order to appear in LA County Superior Court at the Stanley Mosk Courthouse in downtown LA, on Tuesday, in front of Judge Mitchell L. Beckloff.

(On Monday, the  Tuesday court date was changed to Wednesday.)

The county’s lawsuit is the next step in what has become an escalating battle between the board of supervisors and the new sheriff, most of which has centered around the Mandoyan case.

“They’re trying to get to the sheriff through Mandoyan,” said attorney Greg Smith.

The new lawsuit was filed after the sheriff refused to carry out an order issued by the county on February 20, telling Sheriff Villanueva that his reinstatement of Carl Mandoyan was “unlawful,” and that Mandoyan must turn in his badge and his weapon.

Sheriff Villanueva ignored this directive.  No badges or warrents were collected.

Then on February 28,  Los Angeles County Auditor-Controller John Naimo, sent a hand-delivered letter to Mandoyan himself telling him that he was “not authorized to serve as a county employee,” and needed to turn over his badge etc. etc.

The orders in that letter didn’t fare any better than those of the February 20 letter.

Carl Mandoyan, as most readers know,  was discharged from the LA County Sheriff’s Department on September 14, 2016, for allegations of domestic abuse, stalking, and spying on his ex-girlfriend, who was at the time also a deputy also working at the department.

The alleged victim stated in an application for a temporary restraining order that Mandoyan grabbed her by the back of her neck and pushed her face down into a couch, then ripped off her jeans and continued to squeeze her neck “for as long as 30 seconds.”

She further alleged that when she escaped and tried to lock herself in a bathroom, Mandoyan kicked in the door and broke it, according to the LA Times’ Maya Lau, who first broke the story in mid January.

Then, after the incident,  Mandoyan allegedly spied on his ex, attempted to shove his way into her home several times, listened in on conversations with friends, threatened her, and so on.

The deputy appealed to the five-person civil service commission, which unanimously upheld his termination.

After his election, Sheriff Villanueva reinstated Mandoyan, which caused an uproar, especially because of the allegations of spousal abuse against the former deputy.

At a press conference held early last month, Steve Gross, the Chief of the LASD’s South Patrol Division,  explained to the crowd that he and a committee of others reviewed all the facts of Mandoyan’s case, and that the “ad hoc committee” determined that some the findings in the case were “founded,” said Gross, and “we upheld those findings.” Whereas, most of the other findings the group “found to be ‘unresolved,” meaning in wasn’t clear if they were true or false.

According to Greg Smith, even with his reinstatement, Mandoyan did not go entirely unpunished, but was relieved of duty for twelve days as a sanction for one of the accusations that the reinstatement committee considered to be “founded.”

Reading aloud from the new committee’s findings, Smith said that committee members “concluded Mr. Mandoyan exercised poor decision making and acted in an impulsive and immature manner when he entered on to the balcony patio of [his ex’s] residence and repeatedly knocked on her window, and when he opened her unlocked bathroom window and engaged in a back and for the with [his ex].” Further, “[his ex] did not give him permission either to climb on her balcony or to open her bathroom window. She repeatedly asked him to leave and threatened to call the police….”

Mandoyan said he was trying to retrieve his gun and a bag from his ex’s home.  It was for this, according to Smith, that Mandoyan received the 12 days on the sidelines after his rehiring.

As for the upcoming hearing, Smith said that it is his and the sheriff’s position that the county “doesn’t have the authority to rescind a bad termination,” a point that he said was important to the Supes case. Smith also contends that it is “completely within the sheriff’s purview and within his power to run the day to day operations of the sheriff’s department,” which includes rehiring Carl Mandoyan.