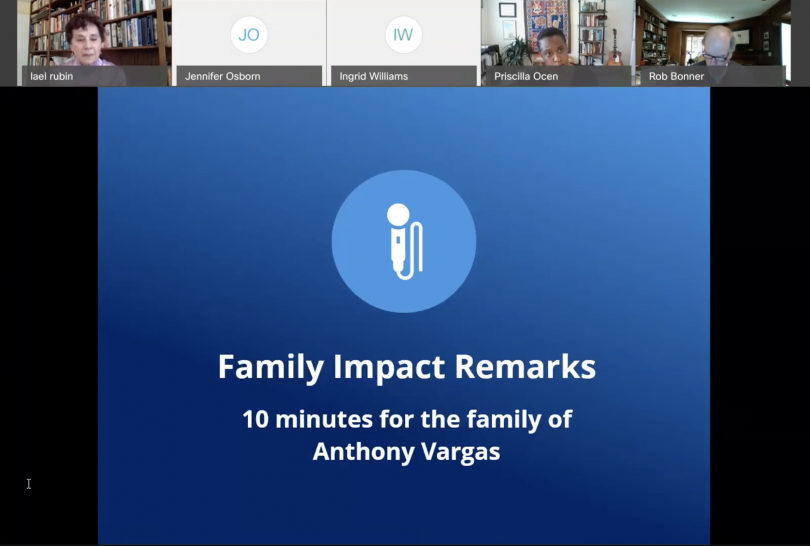 In response to reports of harassment and intimidation from members of the Los Angeles County Sheriff’s Department against families of individuals killed by deputies, the LA County Board of Supervisors may soon take steps to stop the targeted mistreatment and deepen an investigation into the issue.

Community members have gathered a number of times to tell their stories to the LA supervisors and to the civilian commission that oversees the sheriff’s department.

Many of the families reported being targeted after publicly protesting and filing lawsuits against the department over the fatal shootings.

The families of Paul Rea, Ryan Twyman, Anthony Vargas, and others, have spoken of heavy LASD presence at funerals and memorial sites. Deputies, speakers have said, taunted those in attendance, made rude comments and hand gestures, laughed and smirked, and damaged items at vigil sites.

In at least one instance, officers arrested people who had gathered to grieve together at the site of a killing. After East LA deputies shot and killed 18-year-old Paul Rea, they arrested his sister, Jaylene, and two of Paul’s friends over a single marijuana blunt during a vigil gathering.

Jaylene said deputies drove her around for two frightening hours, despite the fact that the arrest took place very close to the East LA Station. Deputies then held her in the station overnight, saying that there was no one qualified to take her fingerprints on duty.

Sharing testimony during the March 19, 2021, Civilian Oversight Commission meeting, Lisa Vargas, the mother of 21-year-old Anthony Vargas, who died in 2018 when deputies shot 11 bullets into his body from behind, said “nothing is being done” to stop the deputies from harassing families.

On multiple occasions, the Vargas family has shared testimony about being followed in unmarked cars, pulled over multiple times, and intimidated.

Anthony’s uncle, family members reported, was pulled over on the way to work and made to sit on the sidewalk in handcuffs for two hours while the deputies who pulled him over ate in their car.

Family members have reported deputies engaging in “serious and often illegal forms of harassment on a number of occasions, including targeting family members for arrest and detention without probable cause, frequently pulling over family members and searching their vehicles, and harassing family members of minor age,” Supervisors Hilda Solis and Holly Mitchell wrote in a motion to be considered on May 4.

This is not the first action county leaders have taken to address the issue of deputies harassing impacted families.

In response to testimony from the families, who shared similar stories of troubling behavior from members of the East LA and Century Stations, the Civilian Oversight Commission voted unanimously to direct Inspector General Max Huntsman to look into the issue on November 19, 2019. The OIG concluded that the problem was not merely that individual deputies were behaving badly “in a vacuum,” but more of top-down management problem. “The sheriff’s department needs, as a department, to come up with a way to let people grieve without it becoming an us-versus-them battle,” Huntsman told the commissioners in his report back in January 2020.

“Unfortunately,” Solis and Mitchell’s motion says, “for many families in Los Angeles County (County), the healing that should occur after the tragic killing of their loved one is often hampered and delayed by the continued harassment and retaliation by the LA Sheriff’s Department (LASD), which countless families face for speaking up on behalf of their loved ones.”

The motion directs the LA County Office of Inspector General to work with families to update his 2020 report on alleged incidents of harassment and retaliation against community members whose loved ones were killed during encounters with the sheriff’s department.

Huntsman’s investigation, while thorough, was limited in that it looked solely at complaints submitted to the department.

The motion would direct the OIG to “conduct an in-depth investigation that is not limited to complaints filed with the Los Angeles Sheriff’s Department; and report back to the Board of Supervisors within 60 days with robust recommendations for supporting families and forbidding any harassment of them.”

The motion also seeks potential legal options “for escalation if the sheriff’s department fails to cooperate with the OIG during this investigation.”

Solis and Mitchell also want the OIG to work with impacted families, the district attorney’s office, and other stakeholders to draft a report focused on alternative systems for submitting and evaluating complaints against members of the sheriff’s department.