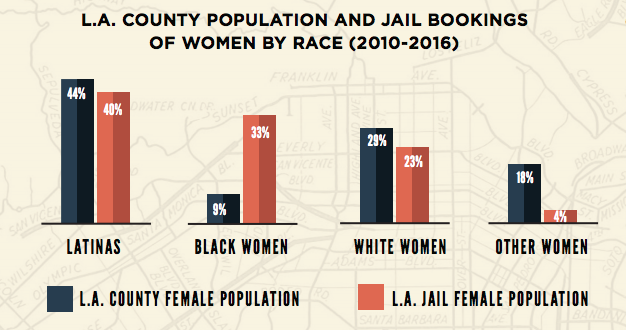 The data, obtained through a Public Records Act request, showed that the women booked by the sheriff’s department spent at least 16,466 combined years behind bars. Their incarceration cost the county at least $751,969,367 over those seven years, according to the researchers.

“Providing services and housing a formerly incarcerated woman costs [A New Way of Life] $17,000 per woman per year,” said Susan Burton, whose organization helps women returning from prison get back on their feet. “Programs like ours could’ve given shelter, hope & healing to more than 44,000 women for a full year with the money LA County threw away on incarceration for 7 years.”

Racial disparities in arrest rates versus county population rates landed hardest on black women, who made up 33 percent of jail bookings, but just 9 percent of all women in LA County.

The Latinas booked into jails accounted for most of the 16,466 years of incarceration, spending a collective 6,528 years in jail cells, at least. Black women spent a total of at least 5,481 years behind bars, while white women spent 3,787 years.

The five most common zip codes among the women booked into county jails were in South LA and the Antelope Valley cities of Palmdale and Lancaster.

According to the report, the five most common charges women faced were possession of a controlled substance (14 percent), driving on a suspended license or with no insurance (8 percent), theft, shoplifting, or larceny (7 percent), failure to appear (6 percent), and DUI (6 percent). “There were up to 17 charges listed per booking in the data set,” the report stated “‘Most Common Charges’ refers to those charges that appeared most often across the 17 charges.”

UCLA’s Ralph J. Bunche Center for African American Studies launched the Million Dollar Hoods Project in 2016. The project’s goal is to map “how much the Los Angeles Sheriff’s Department and the Los Angeles Police Department spend on incarceration.”

According to the report, between 2014 and 2017, the LASPD made 3,389 arrests of students, issued 2,724 citations, and participated in 1,282 diversions. Boys of color made up 76 percent of all LASPD involvement. And middle-school and elementary school kids accounted for one in four of the total LASPD arrests.

Another report, from December 2017, illuminated sky-high bail numbers in the City of LA. Specifically, when the UCLA researchers examined LAPD arrest data from between 2012 and 2016, they found that courts levied $19,386,418,544 in cash bail against arrestees.

Correction: An earlier version of this story incorrectly stated that the county spent $752 billion, rather than $752 million, incarcerating women between 2010 and 2016.