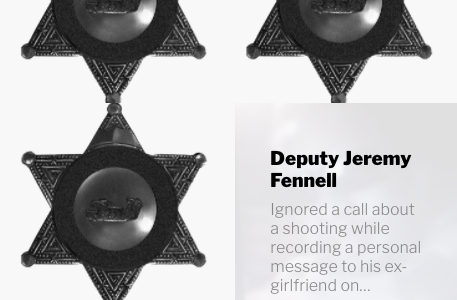 “This is about respecting the rights of peace officers, and preserving the integrity of criminal cases,” Sheriff McDonnell said. “The legal process, is just that, part of a process where the courts will make a number of determinations that will guide how we move forward.”

Past court decisions, according to McDonnell, have failed to adequately explain how to reconcile conflicts between the prosecution’s requirements to turn over potentially exculpatory information under Brady, and state law that says law enforcement officers’ personnel files are classified.

“There is no other objective, other than to seek clarity and guidance from the courts on how to comply with our legal responsibilities under the Brady Decision,” the sheriff added.

The group created the site, TheProblematic.org, in response to a California appeals court ruling on July 11. The 2nd District Court of Appeal affirmed a lower court’s decision to block LA County Sheriff Jim McDonnell’s efforts to present the LA County District Attorney’s Office with the names of approximately 300 deputies found to have engaged in misconduct.

Sheriff McDonnell wanted to turn over the list to the DA’s office in accordance with the 1963 US Supreme Court Brady v. Maryland ruling that requires prosecutors to give defense attorneys any potentially exculpatory evidence—including evidence that a testifying officer might be untrustworthy. (The LA Times’ Maya Lau originally broke the story and has been following it.)

There are 11 acts that land deputies on the so-called Brady list, including making false statements, obstructing an investigation/influencing a witness, unreasonable uses of force, tampering with evidence, and receiving bribes.

In its ruling, the appeals court sided with the Association of Los Angeles Deputy Sheriffs (ALADS), which sued to bar the sheriff from releasing the names, arguing that McDonnell’s action would violate the state’s Peace Officers Bill of Rights, which bans the public release of police disciplinary files.

“We take very seriously the precedent-setting nature of this case and are currently assessing all legal options with our counsel of record,” the sheriff’s department said in response to the latest ruling. “We expect to make an informed decision in the near future once all factors, options, and potential ramifications are assessed in this complex legal matter.”

In absence of the sheriff’s Brady list, Dignity and Power Now is asking the public to send in tips about LASD members who have allegedly engaged in misconduct. The list does not necessarily contain, nor claim to contain, the names of deputies who are on the sheriff’s unseen list, however.

“We decided to make our own list with data collected from news sources, public records and the survivors of sheriff violence,” said Dignity and Power Now founder Patrisse Cullors. “This website is designed to the give the public insight into who are the deputies harming their communities. Right now even the sheriff can’t do that and that makes it impossible to hold the sheriff’s department accountable.”

Dignity and Power Now says its new website is inspired by the Guardian’s project, The Counted, which through a mix of Guardian reporting and crowdsourced information, built up a detailed database of people killed by law enforcement officers in the United States. The Guardian launched the project in 2015, as tensions surged over high profile deaths of men of color at the hands of law enforcement. The project, which was live in 2015 and 2016, aimed to fill a major data collection gap: the US Department of Justice’s lack of a reliable count of officer-involved fatal shootings and other uses of force.

TheProblematic.org currently features about two dozen officers, including Deputy Jeremy Fennell, who, in a troubling 51-second YouTube video that surfaced in March, appeared to deliberately ignore a “gunshot victim” radio call while sitting in a patrol car and talking to a female friend on his phone. Fennell was arrested in late January on a felony charge, reportedly for domestic violence. (In March, WitnessLA wrote about Fennell and allegations that the deputy may have been wrongfully hired with the help of powerful higher-ups.)

The list also includes Joseph Britton, who allegedly retaliated against and threatened two fellow deputies, Michael Rathbun and James Sexton, after they revealed to a superior reports that Britton was trading information with a white supremacist shot caller inmate in exchange for expensive tattoo work from the inmate’s partner. (WLA wrote about Britton: here.)

ALADS, the deputies’ union fighting the release of McDonnell’s Brady list, has spoken out against the website, which local union leaders say contains errors.

“If they want to be considered credible they should fact check, rather than borrow pieces of previously reported stories and manipulate them to fit their agenda,” said ALADS President Ron Hernandez.

The union president said, for example, that DPN erroneously listed one deputy as relieved of duty. “They talk about deputies cleared of wrong doing and appear to insinuate the sheriff’s department is conspiring to cover up with the DA’s office,” Hernandez said.

“They do not care about facts or due process,” Moriguchi said. “They are simply trying to publicly embarrass or ‘out’ officers who use force.”

TheProblematic.org, according to Peter Eliasberg, Chief Counsel of the Southern California ACLU, is “really a product of a ridiculously restrictive set of state laws that deny both criminal defendants and the public critical information about misconduct” committed by deputies “as determined by their own agency.”

The SoCal ACLU, along with California Attorneys for Criminal Justice, the California Public Defenders Association, and Dignity and Power Now, filed an amicus brief in support of Sheriff McDonnell’s efforts to turn over his Brady list to prosecutors.

“People are desperate for ways to find out this information about the very people who are not only tasked with public safety, but who have the legal right to use lethal force,” Eliasberg told WLA.

“Bottom line—somebody has to” hold the sheriff’s department accountable, Patrisse Cullors said. “The Civilian Oversight Commission isn’t doing it and the courts aren’t doing it.”

The LASD, however, does not agree that TheProblematic.org is the way to go about holding the department accountable.

“It’s unfortunate that some groups use the web as a vehicle to spread this type of information that in some cases, is not accurate, or appropriately vetted and has the potential to be inflammatory and jeopardize the safety of the deputies and their families,” the sheriff’s department said in a statement.