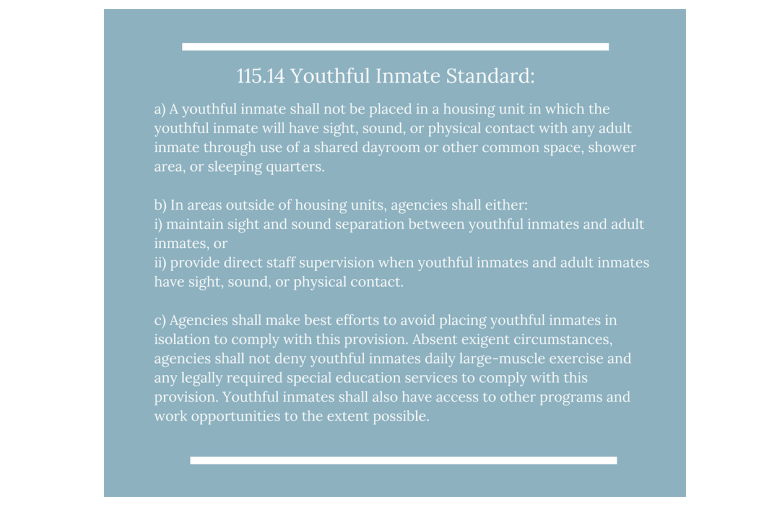 Enacted fifteen years ago, in 2003, the federal Prison Rape Elimination Act aims to prevent rapes and assaults in federal prisons, jails, juvenile detention facilities, and in community corrections. Among the law’s “zero-tolerance” standards is a “Youthful Inmate Standard,” meant to protect minors housed in adult jails and prisons by requiring facilities to house juveniles apart from adult inmates. When kids are outside their separate housing unit, they must be “sight and sound” separated from adults, or else under the direct, constant supervision of staff.

PREA also says that prisons and jails must do their best to not resort to isolating kids in order to achieve the juvenile-adult separation requirements. Additionally, kids must be given the opportunity to exercise, and to participate in education and other programs.

The number of kids housed in adult facilities has dropped considerably over the past two decades. Between 2000 and 2016, the number of kids in adult jails dropped by 50 percent. Part of the trend can be attributed to steadily increasing compliance with PREA’s zero tolerance standards, which were finalized in 2011. At the same time, data has revealed that kids in juvenile facilities tailored to their needs are safer and have better outcomes than their peers in adult lockups.

According to a new report, kids who remain in adult prisons and jails–even PREA-compliant facilities–are still “at risk” of assault and isolation, because of loopholes in the law, and because adult facilities are not equipped to house kids.

“While PREA’s Youthful Inmate Standard was a step in the right direction, when it comes to providing youth what they need to develop into productive adults, it’s not nearly enough”, said Marcy Mistrett, CEO of the Campaign for Youth Justice. “For many young people who remain in adult jails, compliance with the standard has resulted in prolonged solitary confinement, and continued threats to their physical safety. To ensure safety and rehabilitation, youth should not be held in places that were not designed or programmed with them in mind.”

In their study, the Campaign for Youth Justice (CYJ) looked at 826 PREA audits of adult lockups between 2013 and 2018.

The researchers found that most of the states don’t collect or publish information from PREA compliance audits of local jails, where most kids tried as adults are held. Just 25 of the facilities with PREA audits available to the public were county jails. (In a recent op-ed for WitnessLA, Hayden Beaulieu chronicles his journey as a teen through the adult criminal justice system, including time he spent in an adult jail in Cochise County, Arizona.)

CYJ turned up just 81 facilities with PREA audits available to the public that currently hold, have held, or could hold kids in the future.

Two of the facilities did not meet the minimum requirements of the youthful inmate standard: two jails in TX, where 17-year-olds are tried as adults automatically. The Harris County kids were housed with the adult population, resulting in dozens of reports of sexual assault and harassment.

Just six of 81 facilities exceeded the Youthful Inmate Standard. All six were prisons. Those that exceeded the standards held minors in separate units or separate buildings from the adult inmates, implemented policies to kids out of solitary, and gave youth access to education, as well as counseling, and recreation.

But, the report found, that the “basic necessities” and programs that the six facilities exceeding compliance provided kids, could still be better provided by juvenile facilities set up to care for kids. Moreover, juvenile facilities are far better equipped to prevent the sexual and physical assault of minors than adult jails and prisons.

CYJ found that the number of reported sexual assaults of juveniles in adult facilities jumped from 8,768 in 2011—before implementation of PREA standards—to 24,661 in 2015. “Implementation of the PREA standards have succeeded in increased awareness and training on how to address sexual assault in state-run facilities, resulting in more reported incidents than before,” the report states.

In their report, CYJ researchers call on state legislators to continue to pass bills that keep kids out of adult prisons and jails.

The report also urges Congress to further incentivize the removal of kids from adult facilities through PREA, by creating a “private right of action” allowing private citizens to sue over PREA noncompliance. “Without a private right of action, of a prison administrator and staff fail to comply with the PREA standards, the harshest consequence they face is the potential loss of federal funding, which, on average, constitutes just less than three percent of their state prisons’ budget,” the report says.

Additionally, states should be held accountable for local facilities’ PREA compliance, according to CYJ. “While all types of facilities are audited, states only receive a deduction in federal funding for the non-compliance of edecutive-run state facilities,” says the report. “The main incentive for local jails to comply with PREA is to mitigate legal claims of deliberate indifference to conditions fostering sexual assault. Beyond legal protection, local jails are generally not incentivized or required to publish their PREA audits.” (Los Angeles County is still not fully PREA compliant.)

The report also says that PREA auditors should be allowed to visit a prison or jail at any time during the facility’s audit year “to ensure a realistic representation of the conditions” inside the facility. Instead, auditors must give lockups six to eight weeks notice before a visit.

Moreover, when an auditor finds that a jail or prison is out of compliance, the facility has 180 days to correct the problem. This long corrective action period leaves vulnerable populations in danger, according to the report.

Finally, the report urges states to “restrict the use of solitary confinement of youth held in adult facilities.” If states can’t keep kids out of psychologically harmful solitary confinement because of “sight and sound” issues, kids should be ” immediately moved to juvenile placements.”

The Youthful Inmate Standard “is not enough to ensure that youth are protected,” the report concludes. “The most efficient and effective way to comply with the standard is to remove all youth under 18 from adult facilities … Unfortunately, until areas of the law and regulations are strengthened, the vulnerable populations the law seeks to protect, particularly youth, will continue to experience elevated risks of abuse.”