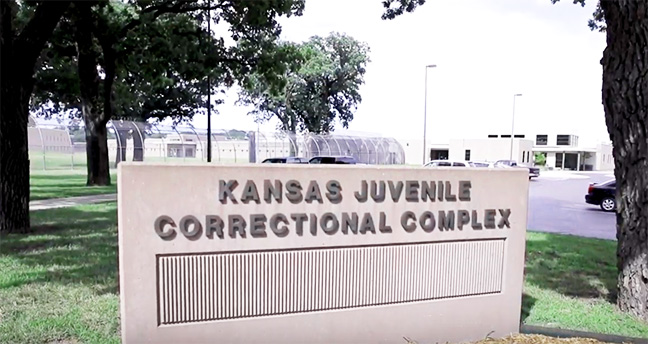 When Kansas embarked on a path to improve juvenile justice, state leaders, policymakers, and stakeholders looked to data and research to inform the legislation adopted in 2016. A little more than two years after enactment, the reforms are showing clear signs of progress.

A recent report from the Kansas Juvenile Justice Oversight Committee shows that the population of the state’s youth prison, the Juvenile Correctional Facility, fell from 237 in 2015 to 164 in 2018, a 31 percent reduction. In total, state statistics show that the out-of-home youth population dropped by 63 percent between 2015 and 2018. And, based on the latest available data, the total number of juvenile arrests decreased by 29 percent from 2015 to 2017, showing that justice reforms and public safety improvements can proceed in tandem. 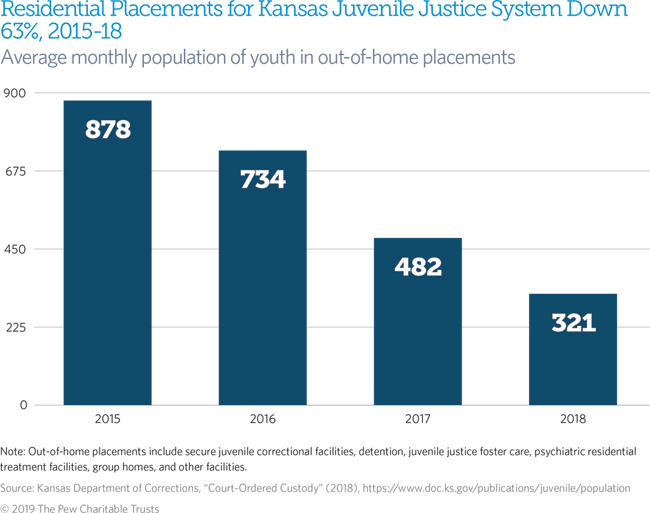 The decline in youth confinement—attributed in the report primarily to the closing of a correctional facility and reduced reliance on group homes—has allowed the Kansas Department of Corrections (KDOC) to shift $30 million in savings into the Juvenile Justice Evidence Based Practice (EBP) Fund, which subsidizes community-based programs at both the state and county levels. The additional funding has helped provide effective supervision of youth while they remain with their families at home.

Research shows that the costly practice of confining juveniles tends to be no more likely to reduce recidivism than keeping them in their own homes for treatment. Confinement can actually increase the likelihood of certain youth reoffending. On the other hand, evidence-based, in-home treatment options, such as cognitive behavioral therapy, have been shown to produce substantial reductions in recidivism.

Before passage of Senate Bill 367 in 2016, many youth with lower-level offense and risk profiles were sent to juvenile justice group homes. However, most residents in the homes were being unsuccessfully discharged, meaning they may have run away, not completed required programming, or were charged with new crimes, for example. At the time, Kansas’s 31 judicial districts offered few alternatives to incarceration. In addition, the lack of criteria to guide decisions about youth placement led to vastly different responses to similar behavior across the state, largely dependent on where a young person lived.

The shift to keeping more youth with their families is improving results. A 2015 study of state group homes found that fewer than half of those placed in the homes completed their programs successfully. Now, however, young people who might previously have been placed in a group setting generally receive evidence-based services while residing at home. Those services can include functional family therapy and moral reconation therapy, which seeks to decrease repeat offenses by focusing on moral reasoning skills.

Both treatments help youth change their behavior when faced with situations similar to those that led to their initial involvement with the juvenile justice system. The 2018 Oversight Committee report notes that 63 percent to 88 percent of the time—depending on the program—youth enrolled in services such as these completed their programs successfully that year.

In addition, 99 of 105 counties now operate what are known as immediate intervention programs, an option that diverts youth from being formally charged in the juvenile justice system. According to the 88 counties that reported data for 2018, 89 percent of youth successfully completed their programs.

The reductions in residential placements have already surpassed those projected when the legislation was enacted. The reforms are well on their way to an expected yield of $72 million in total for reinvestment by 2020. Looking ahead, distributing these funds to create enhanced infrastructure to serve youth living at home requires that localities engage with state officials to create programs. Without clear direction from state juvenile justice administrators and legislators about service gaps and funding needs, implementing entities—from the oversight council to county leadership will face difficulties increasing alternatives at the rate expected by judges and justice system stakeholders.

Furthermore, during its 2018 session, the legislature re-appropriated $6 million from the EBP fund to the state Department of Health and Environment. That switch prompted broad concern about the sustainability of resources for community-based services. The state’s Juvenile Justice Oversight Committee, which monitors how the fund is used, called on appropriators to reverse the reallocation, arguing that the removal violated provisions of S.B. 367 that direct how the state shall spend the funds. This year, the legislature will consider measures to restore that money to its intended use—improving services to those in the juvenile justice system and their families.

To ensure that the reforms are implemented as spelled out in the law, and that positive trends continue, stakeholders will have to be vigilant about protecting savings intended for reinvestment and helping local communities identify where they need funds to address service gaps.

Editor’s note:  For more, read the Kansas report for yourself.  It’s impressive!

Dana Shoenberg is a senior manager of juvenile justice research and policy, Casey Pheiffer is a manager, and Ruth Rosenthal is an associate manager with The Pew Charitable Trusts’ public safety performance project, where this story first appeared.