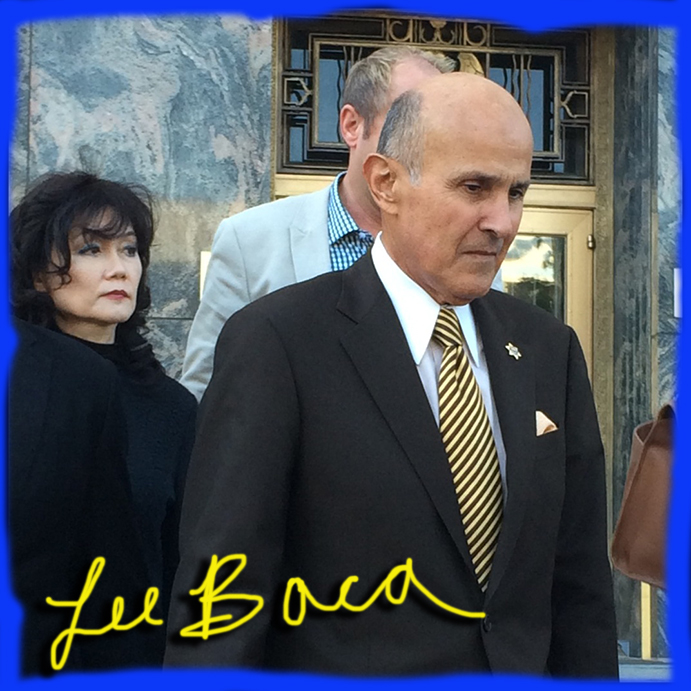 At a 3 p.m hearing on Wednesday in the courtroom of U.S. District Court Judge Percy Anderson, federal prosecutor Brandon Fox argued that former Los Angeles County Sheriff Lee Baca and his defense team should not be allowed to bring in expert witness, UCLA psychiatrist Dr. James Spar, to testify about Baca’s diagnosis of early stage Alzheimer’s disease, and what it suggests about his cognitive ability in the years prior to his diagnosis.

Baca was first officially diagnosed as having some kind of cognitive impairments, on May 13, 2014.

More to the point, the defense hopes to have Spar testify about whether it was likely that the former sheriff was suffering cognitive impairment during the four and a half hour interview with federal officials on April 12, 2013, during which time he allegedly lied to the feds on four different occasions.

Baca is charged with obstruction of justice, conspiracy to obstruct justice, and lying to federal officials. His trial is scheduled to begin jury selection on December 6.

Spar’s area of expertise has to do with mental illnesses affecting the elderly, thus by getting him to the witness stand, the defense hopes to introduce the idea that the former sheriff may not have been cognitively able in 2011, and again in 2013, to be legally responsible for his alleged crimes.

Baca’s attorney, Nathan Hochman, pointed out in the defense’s opposition to the government’s motion, and again in court, that his client had answered “I don’t recall” 25 times” during the crucial 2013 interview with the government. Dr. Spar, Hochman said, would testify to the probability that Mr. Baca was in the “pre-clinical stage” of Alzheimers, which Spar contends “can occur 10 years or more before the onset of clinical symptoms,” or the Mild Clinical Impairment” or MCI stage of Alzheimer’s during his April 12, 2013 government interview, but that the symptoms “were not formally diagnosed until May 2014.”

In response, Fox pointed out that “I don’t recall,” is a common response by witnesses in the hot seat, and called Spar’s contention that Baca could have been suffering from some kind of cognitive impairment for up to ten years prior to his actual diagnosis “junk science.” Spar was “cherry picking” facts that were beneficial to the defense, Fox said.

On Tuesday, Judge Anderson seemed very engaged in the issue, and asked defense attorney Hochman question after question about what Spar would say that was “an objective assessment.” Were there any “documented complaints by Baca about memory?” Anderson wanted to know.

In the end, however, Judge Anderson declined to rule right away on the government’s motion to bar Dr. Spar’s testimony, but said he would hand down a ruling before the trial’s beginning.

IF NOT SPAR THEN BACA?

Even if the judge rules that Spar’s testimony would be more prejudicial than probative, thus keeps Dr. Spar off the stand, the defense could still get the Alzheimer’s issue in front of the jury by putting Baca on the stand, said former assistant U.S. Attorney, Miriam Krinsky, who was also the executive director of the Citizen’s Commission on Jail Violence.

When WitnessLA asked Hochman if the defense team would indeed consider putting the former sheriff on the stand, he said that the defense team was “evaluating all options, and those options include calling Sheriff Baca as a witness in his own case.”