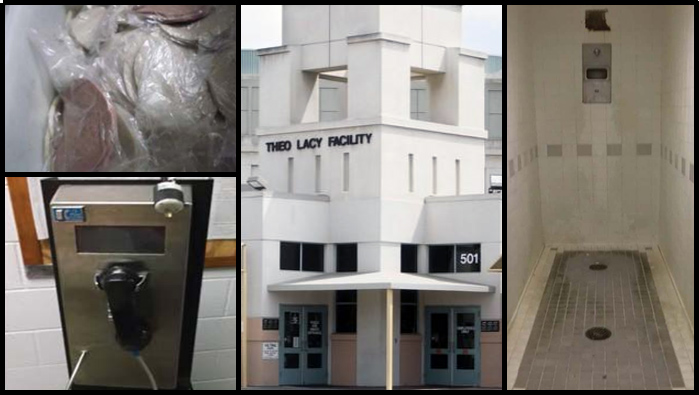 Immigrant detainees held in Orange County’s Theo Lacy Facility are served spoiled lunch meat, are forced to use moldy showers, and face overly harsh solitary confinement and other poor living conditions, according to a report from the Inspector General’s Office within the Department of Homeland Security.

Inspectors found serious food safety violations, including “slimy, foul smelling lunch meat that appeared to be spoiled,” at the Santa Ana jail, which is run by the OC Sheriff’s Department and holds around 500 immigrants awaiting deportation hearings. The malodorous meat observed by the OIG team was scheduled to be served to the detainees the same day. Immigrants said that they had to rinse off the meat served to them, which repeatedly smelled and tasted bad. Among other alarming FDA food safety violations, the report found that unwrapped lunch meat was stored in unlabeled, uncovered containers, with no information about contents or expiration dates.

The Inspector General’s Office also found mold and mildew in the shower stalls, as well as trash in both the showers and individual cells. OCSD staff told inspectors that detainees are required to clean the showers daily, but are only given a scrub brush and an all-purpose cleaner that is ineffective against mold and mildew. And requiring immigrant detainees to clean common areas used by all detainees is in violation of US Immigration and Customs Enforcement’s detention standards.

In three of the modules visited by the OIG team, telephones were found inoperable. Detainees reported that some of the phones were broken, and the ones that weren’t had a low volume that prevented them from being used.

Even worse, the OC Sheriff’s Department was found to be violating standards for solitary confinement. When immigrants violate the jail rules, they can be placed in a disciplinary segregation unit. Those in isolation are supposed to be allowed a minimum of 1 hour of recreation time five days per week. Detainees in isolation are also supposed to still have visitation rights, and access to telephones, reading material, and religious guidance. The investigation found that detainees were held in solitary 24 hours a day, with no access to visitors, recreation, or group religious services. They were allowed one book from the library for the entirety of their time spent in disciplinary solitary, which could last up to 30 days.

ICE has agreed with all recommendations for rectifying the problems found at Theo Lacy.

In a statement, the Orange County Sheriff’s Department said that “all concerns alleged by the OIG have been addressed.”

“The Sheriff’s Department remains committed to the health and safety of all immigration detainees,” the statement read.