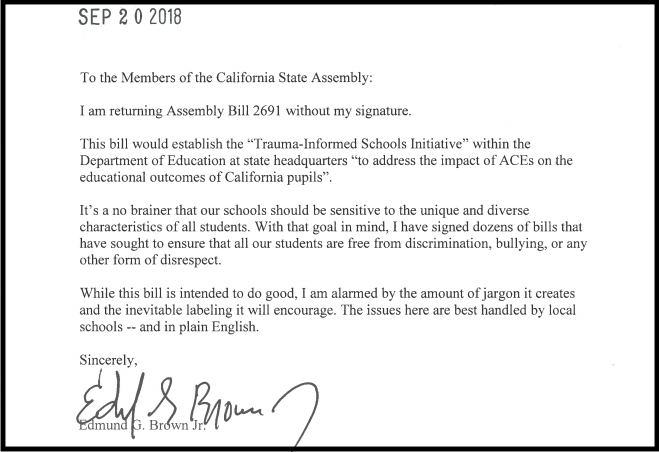 On Thursday, Governor Jerry Brown vetoed a bill that would have created a “Trauma-Informed Schools Initiative” within the California Department of Education.

For those unfamiliar, the 1997 Adverse Childhood Experiences study, by Vincent Felitti and Robert Anda, examined the long-term effects that trauma (ACEs)—like abuse, neglect, witnessing violence, and divorce—have on kids.

The study included a 10-question ACEs screening questionnaire, which has become the benchmark for measuring childhood trauma. (Take the quiz yourself, here.) Kids with four or more ACEs have a much higher likelihood of having mental, social, and physical health issues, including depression, PTSD, drug use, alcoholism, suicidality, diabetes, obesity, heart disease, cancer, and missing work.

Research has also shown that childhood traumas negatively impact kids’ behavior in schools as well as their academic outcomes, and have been linked to missing school days, suspension, expulsion, repeating grades, and higher drop-out rates.

“For many children who have experienced traumatic events, school can feel like a battleground, which sabotages their ability to remain calm and regulate their behavior in the classroom,” Assemblymember Jones-Sawyer said when he introduced the bill. “Unfortunately, many of these children develop behavioral coping mechanisms in an effort to feel safe and in control, yet these behaviors can frustrate educators and evoke exasperated reprisals, reactions that both strengthen the child’s expectations of confrontation and danger and reinforce a negative self-image.”

The bill would have required the CA Department of Education to help schools adopt trauma-informed practices and policies with information and training. The department would also have had to create an online website full of information for schools, kids, and families about the “Trauma-Informed Schools Initiative.”

The Department of Education would have also been ordered to work with University of California and the California State University campuses to offer students and their families “trauma-informed” clinical care.

The American Academy of Pediatrics, California, which represents more than 5000 pediatricians, sent Jones-Sawyer a letter of support for the bill and its mission of helping “traumatized children succeed in school.”

In his veto message, however, Governor Jerry Brown criticized the bill’s “jargon,” and argued that the issue was best left to local school districts.

“It’s a no brainer that our schools should be sensitive to the unique and diverse characteristics of all students,” Brown wrote. “With that goal in mind, I have signed dozens of bills that have sought to ensure that all our students are free from discrimination, bullying, or any other form of disrespect.”

While Brown acknowledged that the intentions behind the bill were good, he said he was “alarmed by the amount of jargon” the bill would create, “and the inevitable labeling it will encourage.”