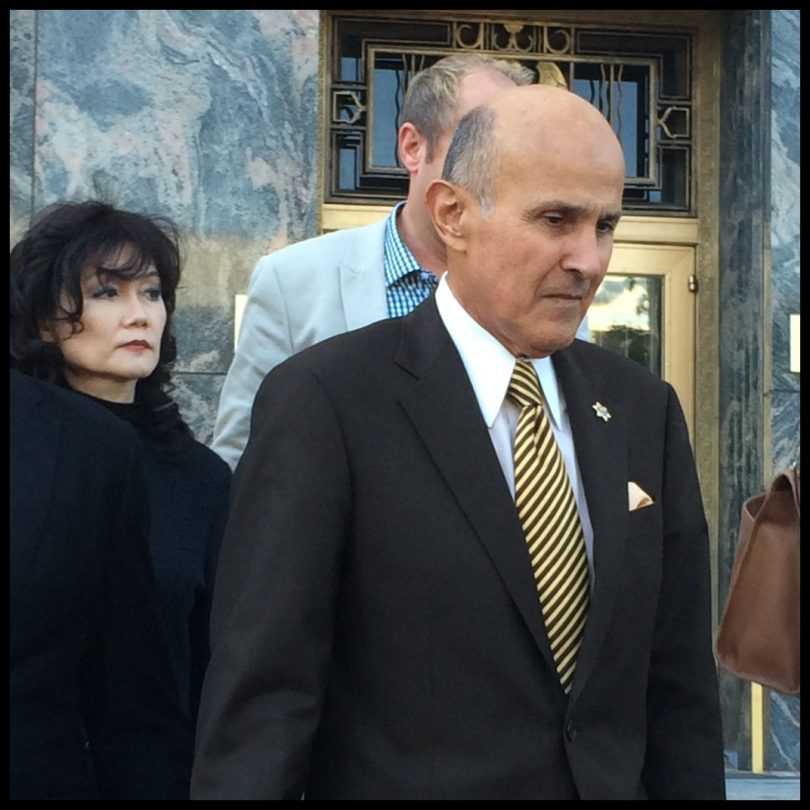 On Monday afternoon, former Los Angeles County Sheriff Lee Baca and his attorneys will go to court to try to persuade a federal judge to grant two motions that Baca and company say are crucial to their case.

The first request is for a change of venue. Baca’s lead attorney, Nathan Hochman wrote in the lengthy motion that his client cannot get a fair trial in Los Angeles County, and likely not in areas as close as Orange or Riverside Counties either, due to “a tsunami of highly prejudicial media coverage of the case.”

Motion two seeks to have the government’s lead prosecutor, Brandon Fox, removed from the prosecution’s team because the defense says it plans to call Fox as a crucial witness.

Attorney Hochman’s argument about what he describes as Fox’s importance on the witness stand is laid out in 56 pages, and centers around the interview with Baca by the feds that took place on April 12, 2013, during which the former sheriff allegedly lied to two federal prosecutors, one of them Fox—along with two FBI agents—about his alleged knowledge and participation in event that took place in the late summer of 2011, and that would ultimately form the basis for all the obstruction of justice cases against members of the sheriff’s department.

Baca, if you’ll remember, was indicted by a federal grand jury for obstruction of justice and conspiracy to obstruct justice. These two new charges came on top of an original charge of lying to federal officials that Baca admitted to back in February, as part of a plea deal hammered out with federal prosecutors.

Among other things, Hochman contends that, as the main questioner of Baca during his interview with the feds (which led to his original charge), Fox can testify uniquely about the former sheriff’s physical and mental state as he answered questions during the four and a half hour interview, “since part of Mr. Baca’s defense….will rely on the impairment of his memory as a result of his Alzheimer’s disease, to remember in April 2013 what occurred twenty months before in August and September 2011.”

One might wonder why a four-time elected sheriff who headed up the nation’s largest sheriff’s department for a decade and a half should need to be warned that lying to federal officials was against the law, whether under oath or not, but that’s a matter that will no doubt be taken up at the trial.

CAN’T GET JUSTICE IN LA

A week or so after Baca’s motions were filed, the government team came back with its own strongly-word arguments explaining why the defense’s motions should not be granted.

Regarding the defense demand for a change of venue, the government wrote, “While this case is of public interest, as many cases in this district are, the trial atmosphere has not been ‘utterly corrupted’ such that defendant cannot obtain a fair trial. The idea that twelve impartial individuals could not be empaneled in this, the largest federal judicial district in the nation, is indeed ‘hard to sustain.’

Furthermore, the government argued, “if the Court finds, based on the voir dire process, that actual prejudice may exist,” then the Court can have a back-up jury pool on stand-by in Santa Ana or elsewhere.”

As for getting lead prosecutor Brandon Fox kicked off the government’s legal team, the prosecution had this to say:

“Defendant’s motion is frivolous,” the government wrote. “Defendant has shown no need, let alone the required ‘compelling need’ for AUSA Fox’s testimony. It is obvious that he does not intend to call AUSA Fox as a witness. Instead, defendant’s filing is a thinly veiled attempt to remove from his case an experienced trial attorney who has led the successful prosecutions of defendant’s co-conspirators.”

Originally, Baca and his team also sought to have U.S. District Judge Percy Anderson recused from the case, arguing that Anderson was prejudiced against the defendant.

Since that motion was shot down earlier this month, it means that Anderson will be deciding on Monday’s motions.

Also, we noticed that, after replacing his original attorney, Michael Zweiback, with Nathan Hochman in August, the former sheriff is adding yet another lawyer to his line-up, this one, an out-of-towner from Chicago named Tinos Diamantatos.

More after the hearing. So stay tuned.