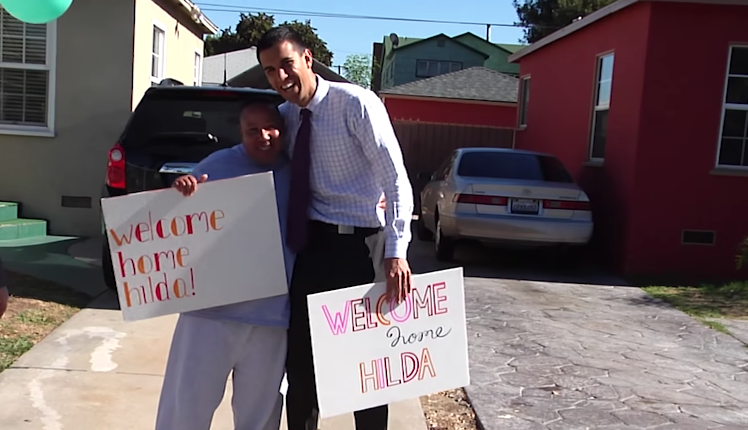 The inmates at the maximum-security Pelican Bay State Prison in Northern California sat in a circle in the enormous gym, their hair graying at the temples and a decades-old refrain echoing through their heads: No optimism. No chance to go home. Most had been incarcerated for more than half their lives, sentenced to die in prison for crimes committed as juveniles or young adults.

But on a day last month, the men thought about second chances. They listened and took notes as a group of people dedicated to reforming the juvenile justice system spoke to them about the difficult path to release through parole.

Made up of USC law students, formerly incarcerated advocates and three human rights and legal professionals, the team was there to educate the prisoners about new laws that could lead to their freedom.

“We are really excited to meet you today, and to help you get home,” said Professor Heidi Rummel, director of the USC Gould School of Law’s Post-Conviction Justice Project, which has co-sponsored or written nearly every juvenile justice bill in California since 2012. “We are going to help you with the parole process because it can be a steep hill to climb,” Rummel, a former federal prosecutor, told the men. “The goal is to show the board who you are now. You need to search within yourself to find your story.”

The men’s once-stoic expressions turned to smiles and optimism. Even though some of the men aren’t eligible for parole for 10 or 15 years, they can now dream of freedom.

Rummel and her Post-Conviction Justice Project students have made it their mission to hold parole workshops at every prison in California that houses juvenile offenders sentenced to life without parole. They have teamed up with Elizabeth Calvin, senior advocate at Human Rights Watch, who teaches with Rummel at USC Gould.

So far, they have visited 19 prisons in the past year, holding workshops and offering counsel to 211 of the state’s 257 juvenile offenders originally sentenced to life without parole (LWOP). On the Pelican Bay prison visit, they were joined by Scott Budnick, producer of The Hangover franchise and founder of the non-profit Anti-Recidivism Coalition, which employs former youth offenders in Hollywood and elsewhere.

USC Gould and Human Rights Watch began their prison workshops after writing a slew of juvenile justice bills, including the recently passed California’s SB 394, which gives juveniles sentenced to life without parole a meaningful opportunity for release through the youth offender parole process.

Calvin bestowed on each of the men a piece of paper with a first-time-ever parole eligibility date – something that had not existed before SB 394 took effect in 2018. “On Dec. 31, 2017, the system showed LWOP after your name,” Calvin said “Now there is a date. This is significant. This is your future.”

Many juvenile LWOP prisoners are not prepared for parole-board hearings because they had no hope of release and very few opportunities for rehabilitative programming. By offering the workshops and one-on-one legal sessions with the law students, Rummel and her team hope to fill the gap.

There to support them in their efforts were former juvenile LWOP clients, who have been released through the parole process. They shared their stories and offered advice. “You have got to be authentic and real,” said Jawad James, who was resentenced and paroled in July. “The board can see through lies and manipulation. You need to dig deep inside yourself and explain how you have reformed.”

The next day, the team gathered for a second Pelican Bay workshop with men sentenced to more than 50 years for crimes they committed as young adults. A presentation from a third-year USC law student moved some inmates to tears. Kyla Wyatt told the crowd that she believes in second chances. But she also warned the men not to expect forgiveness from their victims.

Kyla should know. In 2007, her brother was murdered in an abandoned house after selling marijuana. “You can hear the shake in my voice because it still hurts,” she said. “Now I fight for people who committed crimes very similar to the crime that killed my brother. It’s important to understand the victim.”

She then told the second part of her story. “During my first year of law school, my 17-year-old sister committed a crime identical to the crime that killed my brother. She is now serving 20 years in prison. So I’ve been on both sides.”

She encouraged the men to keep working on themselves and prepare for their hearings. “Even though I’ve lived with the pain, I believe in second chances. Don’t think all victims feel the same way about you. I believe in all of you. If you do the work and make a change, you deserve to go home.”

When she finished speaking, every man in the room rose for a standing ovation.

“It’s really brave of her to share her story,” said Rummel, who has co-directed USC Gould’s PCJP for the past decade. “I am repeatedly inspired by my students and the men we are helping.”

After a full weekend of workshops that included small and large groups, as well as visits to men in solitary confinement, the law students met privately with inmates to provide legal advice about the parole process. Whether their hearing is in two months or two decades away, getting ready for parole is an important challenge, said Rummel.

Rummel and the students outlined a step-by-step explanation of the parole hearing, including three main questions that will be asked: What did you do? Why did you do it? How have you changed?

“The questions are simple but the answers are difficult,” Rummel told the prisoners. “And your answer to the change question must reflect real change. We know that many of you have had little access to rehabilitative programs or positive influences as LWOP inmates. But times are changing, and it is up to you to dig in and do the work.”

If the Pelican Bay visit by Rummel and her team opened the door to a future for dozens of men, then participation in the Post-Conviction Justice Project (PCJP) has also motivated the students as they look ahead.

“The project has given me an opportunity to meet many inspiring individuals who have maintained hope when it seemed impossible,” said Peraya Siriwong, a third-year USC law student. “Going into some of the darkest prisons and finding bright spirits has been an incredibly meaningful part of my law school experience, and it has motivated me to continue to pursue this kind of work.”

After visiting a client in solitary confinement and advising several others, third-year law student Maggie Mendez was ready to return to her law school classes. She said goodbye to the clients, hoping she had provided some spark of hope. “I truly feel honored to be part of PCJP and to work with the clients,” said Mendez, who is planning to be a public defender when she graduates in May. “Our work is providing real change and hope for these individuals.”

Gilien Silsby is a is the former director of media relations for USC Gould School of Law and former associate director of USC News, where this story first appeared.