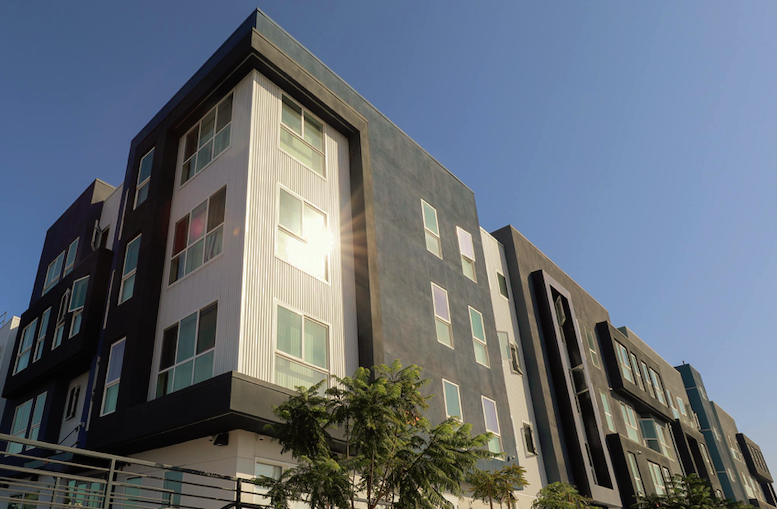 During a decade behind bars at the California Institution for Women in Corona, the 55-year-old Madison underwent multiple orthopedic surgeries and now uses a walker. Her immediate family members passed away during her incarceration, creating grave doubts she would have a support system. She feared leaving prison may lead to a worse fate – habitual homelessness.

Madison was released in early November. By mid-March, she had moved into an apartment just north of downtown Los Angeles. She was also receiving a regular income from disability benefits, and transportation to medical appointments.

Madison said the apartment lacked a stove and refrigerator, and she had virtually no furniture, but was thrilled nonetheless.

“It’s something anybody would love,” she gushed.

Much of the legwork that landed Madison into a relatively secure post-incarceration life was performed by the Los Angeles-based Homeless Outreach Program Integrated Care System (HOPICS). But the funding for Madison’s transformation materialized as a result of Proposition 47, one facet of the extensive criminal reform ballot initiatives passed by California’s voters in recent years.

Approved in 2014, prop. 47’s goal was to reduce California’s prison population in part by making it more difficult to prosecute non-violent property and drug crimes as felonies. It also allowed those convicted of some felonies to be re-sentenced and even have their criminal records expunged.

Another ballot initiative, Prop. 57, was approved by voters in 2016. It reduced the time non-violent offenders had to serve before they could apply for parole.

Both initiatives represent a pullback on some of the tough-on-crime initiatives launched in the 1990s, when the statewide and nationwide crime rates were much higher. That included what was known as the three strikes law, which essentially gave life sentences to those convicted of three felonies, even if the last felony was non-violent or enhanced by the defendant’s prior criminal record. Many critics say this amplified race-based sentencing disparities. In California, African-Americans are incarcerated at a rate nine times higher than whites, while Latinos are incarcerated at nearly double the rate of whites, according to a 2016 report by the nonprofit organization The Sentencing Project.

As California’s prison population shrank as a result of the reforms, the state’s incarceration costs dropped. In 2017, $103 million in savings was granted by the California Board of State and Community Corrections to counties across the state. The funds support job placement programs, treatment for mental health and substance use disorder and other services. The grants run through next year, although the board intends to provide more grants in the future.

Los Angeles County’s Department of Health Services received the largest individual sum, $20 million, and has raised another $10 million from philanthropic organizations to perform outreach to the formerly incarcerated.

While some county agencies, such as the probation department, are providing services of their own, the grants were designed primarily to be passed through to community-based organizations like HOPICS. It is among some 20 agencies in the county that are providing post-incarceration assistance under a Prop. 47-funded program called Reentry Intensive Case Management Services. Those agencies, which also include the Amity Foundation and the Watts Labor Community Action Coalition, connect the recently released with health care, mental health and substance abuse services, employment services and housing.

“They’re all well-established in the communities and can do a lot of outreach and recruitment themselves,” said Vanessa Martin, director of reentry services for the L.A. County Office of Diversion and Reentry.

Monnie Anderson, HOPICS’ preternaturally determined reentry services program manager, regularly visits California’s correctional institutions to announce the services her agency offers. She also mails out fliers to prisoners. The letters she has received in response reside in a file about two inches thick. “It gets around the grapevine,” she said.

Anderson met Madison during a visit last summer. She began receiving services from HOPICS as soon as she walked out of the prison gates. Anderson brought her clothes, including a bra. She arranged for group housing while she set up Madison’s permanent housing. Madison tearfully recalled how Anderson even gave her adhesive for her dentures.

Since last summer, HOPICS has received more than 300 referrals to formerly incarcerated individuals, has enrolled more than 100 in one program or another, and provides intensive case management to more than two dozen parolees. Some were serving life sentences when they were paroled; several had lived behind bars for 20 years or more.

Five HOPICS caseworkers tend to the recently released prisoners. They buy them personal items, secure their housing, help them find jobs, and guide them through state and federal bureaucracies. Many need new forms of identification. Some have never had a Social Security number. “It takes patience, empathy and sympathy,” said Anderson, whose jaw seems perpetually set to power through any obstacle placed in front of her.

Wary of Promises of Help

Despite the ongoing response from California’s incarcerated for the services agencies like HOPICS provides, many releasees remain skeptical of the services being provided, an issue county agencies overseeing the Prop. 47 programs often mention in their reports back to the state. Anderson noted that the justice system tends to wear people down and makes them wary of promises of help.

That was borne out during the recent workday of HOPICS caseworker Joshua Wafer. Impeccably dressed in a three-piece pinstriped suit, he appeared to be on his way to closing a business deal as he roamed the streets of downtown Los Angeles on a recent rainy afternoon. Instead, Wafer was trying to find a 45-year-old probationer who had stubbornly rejected all offers of housing. Wafer had procured him a phone, which soon went missing. After someone had stolen his tent, he vanished much like the phone had, even though he was within days of violating his probation and a potential return to jail. Wafer couldn’t find him at his regular hangouts near Union Station and the Original Pantry Restaurant. Yet the afternoon was not completely futile; Wafer purchased taquitos for one homeless man, and handed out his contact information to another sheltering in a parking structure stairwell.

Meanwhile, the formerly incarcerated are not the only ones skeptical of Prop. 47’s potential benefits. It has drawn some prominent critics, including former Los Angeles Police Chief and City Councilman Bernard Parks, and the union that represents Los Angeles County’s district attorneys. Both claim Prop. 47 has led to an increase in crime, though there is as yet no firm data to directly support this claim.

Peter Espinoza, a former L.A. County Superior Court judge who heads the Office of Diversion and Reentry, did acknowledge that there has been a mild spike in property crimes in California since Prop. 47 went into effect, but that it has not been definitively linked to the ballot initiative. He also said that District Attorney’s office has been a “strong partner” in implementing the program, particularly in working with the Public Defender’s office to help releasees who qualify to expunge their records.

“Eventually we’ll have data that will help us understand one way or another (whether the programs are working or not), but I don’t think we’re there yet,” he added.

Anderson could not provide any specific data herself, but she believes the Prop. 47 programs are cutting down on recidivism. She noted that one of her clients had her parole reduced by 18 months, a rare event. That was primarily because HOPICS had helped stabilize her life after prison and land her a well-paying job, she added.

Wafer returned to his office nearly five hours after he began searching for the probationer. Yet he remained undeterred in his mission to track him down.

“You have to just keep on seeking them out, teach them how to fish, and fend for themselves,” he said. “That’s a good thing.