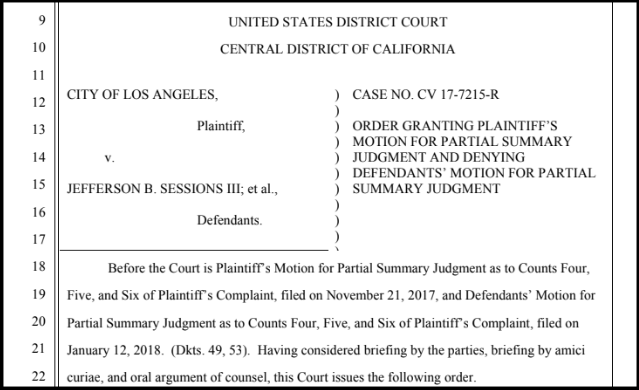 On Thursday, U.S. District Judge Manuel Real issued a ruling that blocked the U.S. Department of Justice from denying important community policing grants to so-called “sanctuary” jurisdictions that don’t go along with the feds demand for local law enforcement to work with ICE on immigration enforcement.

LA’s lawsuit against the DOJ, filed by City Attorney Mike Feuer, accuses the Trump Administration of unconstitutional preferential treatment that leaves LA and other jurisdictions with “an untenable choice.” They can either “commit to participating in federal civil immigration investigation and enforcement efforts, or sacrifice funds for public safety and community policing,” according to the complaint.

“…These inducements would dangerously impact local communities, by requiring jurisdictions to prioritize civil immigration enforcement over public safety or else lose funding for important public safety and community initiatives,” the lawsuit states. “These requirements would cause community members to distrust the police and justice system officials and thereby result in a decrease in cooperation,” making it harder for prosecutors and local law enforcement officers to protect their communities.

In November 2017, the DOJ denied Los Angeles officials’ request for more than $3 million in grant money from the Office of Community Oriented Policing Services (COPS) fund an expansion of the Community Safety Partnership, a much-praised program that has helped reduce violence in LA’s housing projects. Through the program, a collaboration between the Housing Authority of the City of Los Angeles (HACLA) and the LAPD, officers become part of the neighborhood, helping to run youth recreation and sports programs, as well as working to connect people to employment programs, rehabilitation, and other services. In addition to reducing violent crime, when homicides have occurred in the program’s targeted areas, the “relationship-based” policing strategy has helped officers quickly make arrests because of the trust built between the officers and the residents they serve.

The DOJ awarded $98.5 million in COPS hiring grants to more than 175 jurisdictions seeking to hire additional law enforcement officers. US Attorney General Jeff Sessions announced that 80 percent of the grant recipients were jurisdictions that had “agreed to cooperate with federal immigration authorities in their detention facilities.” These grant recipients were given priority over Los Angeles and other jurisdictions that did not vow to assist in immigration enforcement. And it’s not just the COPS funding. The same conditions apply to the Edward Byrne Memorial Justice Assistance Grant dollars, which total $415.5 million in 2018, but have been tied up in court, while California, San Francisco, Chicago, and others challenge the DOJ’s new requirements.

In what City Attorney Feuer called “a complete victory” for LA, Judge Real, a 94-year-old Lyndon B. Johnson appointee, handed down a permanent injunction against the DOJ’s preferential treatment on Thursday. Congress said that the grants “must be used for community policing, not policing generally,” the ruling states.

Moreover, the DOJ’s “broad interpretation of their authority carries extraordinary implications,” Real writes. If the Attorney General can favor applicants based on any factors relevant to public safety, he enjoys nearly limitless discretion to select grant awardees in ways not even tangentially related to community policing.” The AG may give extra consideration to jurisdictions that “agree to implement or abolish capital punishment in the name of public safety,” for example. “In the absence of clear statutory guidance, this Court cannot conclude that Congress intended to stretch Defendants’ authority so broadly,” Real says.

“This is yet another dagger in the heart of the administration’s efforts to use federal funds as a weapon to make local jurisdictions complicit in its civil immigration enforcement policies,” Los Angeles City Attorney Mike Feuer said during a press conference after the ruling.

It’s likely that the Trump Administration will appeal Real’s decision.

“We will not be intimidated by hateful rhetoric and we refuse to politicize public safety,” LA Mayor Eric Garcetti said. “Not in Los Angeles and not on our watch.”