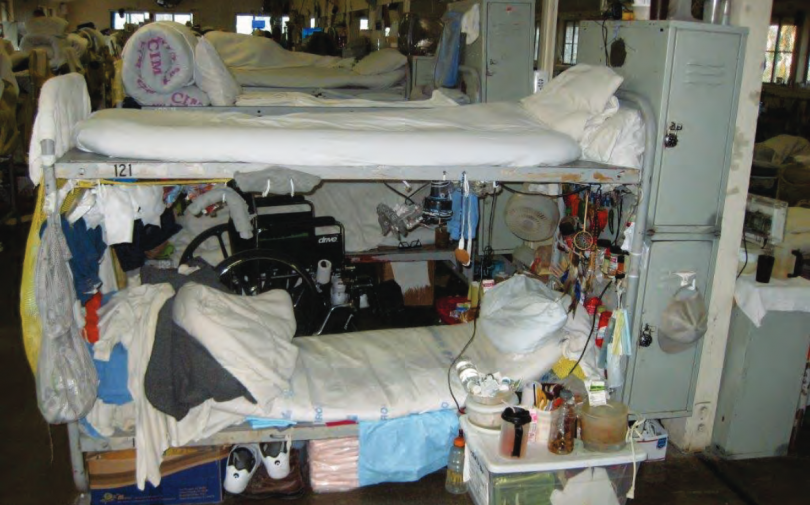 Update: This story has been updated to reflect coronavirus cases within the CA prison system as of 5:00 p.m. on April 18.

On Friday, April 17, a federal judge denied a bid to force California prison officials to further reduce prison overcrowding as part of a larger plan to “manage and prevent the further spread of COVID-19” in the state’s 35 prisons.

On April 18, the number of prisoners testing positive for COVID-19 jumped past the 100-mark, with the largest number of new cases yet. On April 17, the department announced a total of 79 cases. That number increased by 36 cases in 24 hours to 115 prisoners. CDCR has tested 651 incarcerated people, so far.

As of April 18, 88 CDCR workers, who self-report their coronavirus status, had tested positive.

Together, the prison system now has more than 200 confirmed cases of COVID-19.

Amid the outbreak, attorneys from Prison Law Office and Rosen Bien Galvan & Grunfeld, representing inmates in medical and mental health care lawsuits, called on the court to “intervene to force Defendants to turn over every stone to prevent further transmission of COVID-19 in our state prisons.”

“Without an effective distancing plan in place, the number of COVID-19 cases among incarcerated people and CDCR staff has increased dramatically, even since Plaintiffs filed the first emergency motion” on March 25, the lawyers wrote in a filing on April 14.

The prisoners’ attorneys stressed that the CDCR’s plan would not have to mean releasing more prisoners from state custody. “For example,” they wrote, “CDCR might choose to house people in other secure facilities, or to transfer people to temporary home confinement, either of which could be done while keeping people in CDCR custody.”

However, the plaintiffs failed to adequately demonstrate that the state’s response to the coronavirus pandemic was “constitutionally deficient,” U.S. District Court Judge Jon Tigar concluded on Friday.

In order for the judge to have intervened, the plaintiffs would have had to show that the CA Department of Corrections and Rehabilitation (CDCR) was “deliberately indifferent to a substantial risk of serious harm to inmate health or safety.” That burden was not met, Tigar said.

“Given the numerous and significant measures the State of California has taken and continues to take in response to COVID-19, the Court cannot conclude that State officials have been deliberately indifferent,” Tigar wrote.

Before the plaintiffs brought the matter before Judge Tigar, they asked a federal three-judge panel on which Tigar sits, to step in with an emergency order to protect medically fragile prisoners by reducing the prison population cap —  now at 137.5% of capacity — that the panel imposed in 2011 and have overseen since.

On April 4, the judges said they could not legally intervene using the powers of the panel, but suggested different ways the attorneys could seek intervention from the federal court to “prevent the life-threatening spread of COVID-19” in prisons. In its decision, the panel suggested the law firms file new separate motions with one or both of two of the judges on the panel (Judges Jon Tigar and Kimberly Mueller) who are each overseeing class-action lawsuits over prisoner mental and medical health care.

On April 10, Judge Mueller ordered prison officials to submit their plans for addressing the spread of COVID-19 in state lockups. Mueller also ordered the CDCR to appear (virtually) for a hearing on April 21.

On April 16, state attorneys returned with the details of the CDCR’s strategies.

Arguing against federal intervention, state attorneys pointed out that the U.S. Fifth District Court of Appeal agreed earlier this month that “when faced with a society-threatening epidemic, a state may implement emergency measures that curtail constitutional rights so long as the measures have at least some ‘real or substantial relation’ to the public health crisis and are not ‘beyond all question, a plain, palpable invasion of rights secured by the fundamental law.’”

The CDCR and leaders worldwide are doing their best to handle the “unprecedented pandemic,” the state’s lawyers assured the judge.

“Defendants are entitled to deference as they work around the clock to respond to the rapidly evolving emergency impacting their operations of California’s prisons,” state attorneys wrote. “Like society in general, Defendants’ goal is to prevent the spread of COVID-19. The Court should allow Defendants to meet that goal and continue implementing and operationalizing the various facets of their attached strategic plan, which is focused on protecting the health and safety of CDCR inmates, staff, and the public from COVID-19.”

Between March 25 (when just one prisoner and 9 staff members had tested positive) and April 12, California corrections officials reduced the state’s prison population by 6,758 people.

On March 24, CA Governor Gavin Newsom issued an executive order suspending transfers from jail to prison, a move that the CDCR expects to reduce the state’s total prison population by 5,000-6,000 people over the course of 60 days.

Additionally, on March 31, state prison officials identified 3,500 people, who were already within 60 days of scheduled release, to receive expedited early parole in light of the pandemic. All of those the department ultimately considered eligible for release — “more than 3,400” — had been set free as of April 13, according to the plan that the CDCR presented to Judge Tigar.

The coronavirus outbreak is heavily concentrated in two prisons: California State Prison, LA County (LAC), in Lancaster, and California Institution for Men (CIM), in Chino. As of April 18, CIM had 59 COVID-19-positive prisoners and 22 staff members, while LAC had 50 prisoners and 14 staff members.

On that date, no other prison had more than a total of cases.

In the latest official population count, on April 15, LAC was filled to 138 percent of design capacity, a drop of two percent from the March 25 count, the day after Newsom’s order. And CIM’s population had dropped from 117.9 percent of capacity on March 25, to 113.4 percent on April 15.

Visitation and most programs have been put on hold since mid-March. Anyone who enters the prisons must submit to a temperature check and symptom screening. Prisoners movement has also been restricted. Meals are served in prisoners’ housing units and cells. Showers and phones are disinfected after each use, according to the department. Additionally, prison workers have reportedly stuck markers on the floor in communal areas with six feet between each spot to help prisoners keep appropriate distance while they access services.

Over the last couple of weeks, the California Prison Industry Authority has also produced and distributed hand sanitizer for staff and prisoners. And as of mid-April, prison officials report every incarcerated person has now been provided with two cloth masks that must be worn in all dorm settings and in any situation outside a cell (like yard time and canteen trips), and to and from medical visits.

According to the CDCR’s 15-page plan, the department also transferred approximately 1,270 prisoners out of tightly packed dormitory settings. The housing shift was broken into two waves, the second of which was to have occurred by April 16.

Yet, across the prison system, more than 40 percent of the system’s 113,000 prisoners live in dorm settings, which don’t allow near enough space for physical distancing.

“Dorm living requires people to sleep feet (and sometimes inches) from each other, and pass through narrow walkways to access bathroom facilities and common areas,” the prisoners’ attorneys wrote in their original emergency motion. “The only way social distancing would be feasible would be if the bunk beds were moved six feet apart, all double bunks were replaced by single bunks, and people never moved from their beds, including to dress, bathe, use the toilet, or eat.”

And in CIM, where coronavirus has hit prisoners and staff the hardest, “many of the dorms are at over 100% of capacity, and some are at over 160%” according to the plaintiffs.

On April 10, J. Clark Kelso, the federal receiver who oversees health care in California prisons, sent a memo to CDCR Secretary Ralph Diaz, calling on officials to achieve social distancing in dorms by “creating 8-person housing” units inside gymnasiums allowing for 6 feet of distance between prisoners’ living spaces. The CDCR’s April 16 plan says the department will work with Kelso on the gym plan to “assess the population in the dorms and determine what additional steps need to be taken, if any.”

On April 20, CDCR will be required to return for a case management conference with an update on “the steps they have taken to comply with the Receiver’s directive to create eight-person housing cohorts and a timeline for completing implementation.”