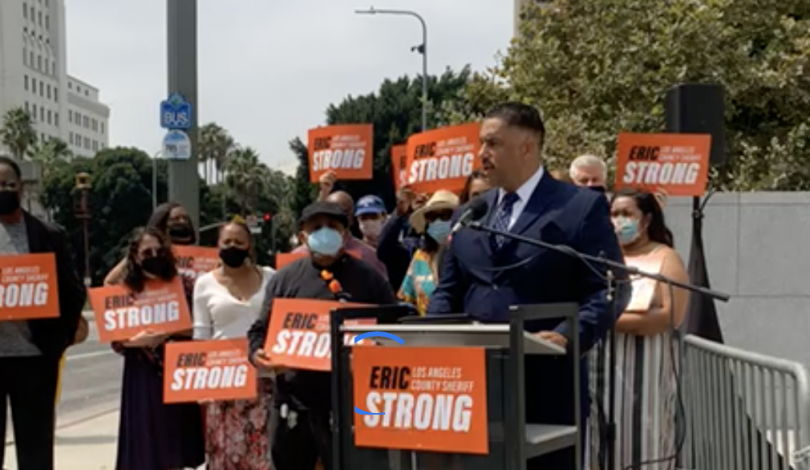 This week, a new candidate named Eric Strong launched his campaign to become the next Los Angeles County Sheriff, raising the number of  people who hope to unseat Sheriff Alex Villanueva to seven, with an eighth rumored to leap in soon.

For those who are happy with the job Sheriff Villanueva is doing, the choice will be simple when they mark their ballots in the June 2022 primary election.

But for Los Angeles County voters who are determined to see the sheriff replaced, the main challenge between now and next June will be figuring out who exactly that replacement ought to be, and whether or not he or she has an actual chance of winning.

As of today, the other six declared challengers include former LASD Assistant Sheriff, Cecil Rhambo, who once was third on the department’s hierarchal ladder, behind then sheriff Lee Baca, and then undersheriff, Paul Tanaka, who were later indicted and convicted of obstruction of justice, and went to federal prison.  Rhambo went on to become the Chief of the LAX Police, and is now the likely front runner of the moment among those hoping to unseat Villanueva, despite a controversial background.  (More on that last issue at a later date.)

In addition to these six, retired sheriff’s commander Robert Lindsey, who unsuccessfully ran for sheriff in 2018, but who still has a following,  is also reportedly considering a new run.

Former LASD Undersheriff Ray Leyva, a well-liked figure who,  more recently, was the interim Chief of LA County Probation while the Board of Supervisors searched for a permanent head of the department, was going to run for sheriff in 2022, and reportedly had a sizable chunk of cash behind his potential candidacy.

But now, Leyva appears to be sidelined for health reasons.

This brings us back to the new entry into the race in the person of LASD Lieutenant Eric Strong.

So who is Eric Strong?

According to his bio, Eric Strong has spent nearly 28 years in law enforcement, the majority of those years with the LA County Sheriff’s Department.

Strong began his time in policing in 1993, working for the Compton PD. When the Compton force was disbanded in 2000 and the LA County Sheriff’s Department took over the city’s policing contract, Strong joined the LASD, which is where he has been for the past 22 years.

In the department he would now like to lead, Strong  says he has worked all across the LASD from patrol, to ports, to custody, to investigations, and a lot more. led units across virtually every function of the LA County Sheriff’s Department, from patrol to courts, custody, investigations, internal affairs, risk management and auditing.

“I’ve worked gangs, youth programs, and internal affairs,” he said, and has held the position unit commander courts in various areas accost the department, including custody, investigations, risk management and auditing.  “I’ve worked in risk management. I’ve taught use of force.”  And he has, he says, had  “extensive experience getting bad officers off the streets.”

In conversation, Lieutenant Strong comes off as bright, articulate, and capable.  Yet, despite his breadth of experience, he has not risen as high on the management ladder as some of the other challengers, which may or may not matter.

Sheriff Villanueva too, like Strong did not rise higher than the rank of lieutenant prior to being elected, a fact that has caused his critics to suggest that his lack of higher level management experience turned out to be a deficit when it came to running the largest Sheriff’s  department.

When WitnessLA talked to Strong this week, we asked him if he thought his rank as lieutenant would be an issue.

“First of all, ” Strong said, when it comes to the present sheriff, “it’s not rank that is the problem.”

There are, he said,  “plenty of lieutenants out there who’ve gone on to successfully run departments. ” He then listed a few such former lieutenants, who were now running law enforcement agencies, including Riverside County Sheriff Chad Bianco.

And in the the end, said Strong, “it’s not the rank, it’s the person.”  In the case of Villanueva, he said, “it’s about his character.”

Strong —who if elected, would be the county’s first Black sheriff — was born and raised in Los Angeles County, and says he believes, in addition to his wide-based experience in the department,  his personal experience makes him uniquely qualified for the job.

“Growing up, I’ve been racially profiled. I’ve been [jammed] up by police.  I’ve  been pulled over when I know unequivocally that I’d not committed any violations. And I’ve seen firsthand the lack of respect and compassion from first responding officers.”

On the other side of that coin, Strong has, he said, been a victim of crime, and has family members who have been victims of violent crimes, including murder.

“I also have family members who have been incarcerated.  And one of my first cousins, who I grew up with, was killed by law enforcement.”

It is this complex weave of experiences, Strong said, and his love of the department, that motivates him.

“The leadership of this department is unwilling to even acknowledge the existence of gangs in our ranks, and that has left the community’s trust in the Sheriff’s Department in tatters,” Strong said.

“As LA County Sheriff, my mission will be to enhance safety, protect victims of crime, and rid the department of a culture that has allowed deputy gangs to fester for 50 years.”

The public,” said Strong,  is less likely to report crimes to officers they do not trust, which is a dangerous dynamic.”

Eric Strong aims to change all that.

“We can, and we will, make this a world-class department that Los Angeles can trust and be proud of,” he said to those at his press conference on Monday.

Strong’s dad was Compton police officer and Strong himself is veteran of the U.S. Marine Corps.  He is a board member of Police Against Racism and a graduate of the FBI’s National Academy at Quantico.  He met his wife, Sidra Sherrod-Strong, who is also with the LASD, while working in the department.

We’ll have lots more about the race and the candidates in coming weeks.