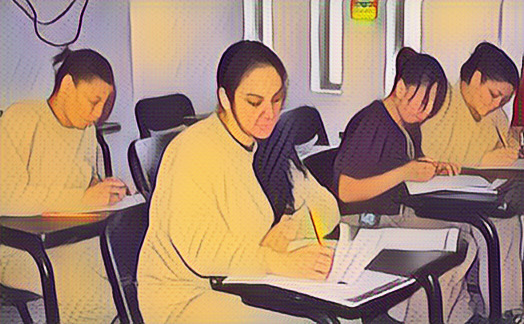 Thirty-eight states fail to legally require prisons and jails to provide menstrual products to the women they incarcerate, according to an issue brief from the ACLU and Period Equity. The report is focused on disparities in access to menstrual products at the national level, as that inadequate access impacts people with limited or no income, those lacking housing, and women involved in the criminal justice system.

Thanks to a 2017 U.S. Bureau of Prisons policy change, followed by a related provision in First Step Act of 2018, federal prisoners are guaranteed free pads and tampons. But prisoners in federal prisons make up just 10 percent of the nation’s total incarcerated population.

There are approximately 231,000 women and girls in prisons, jails, juvenile facilities, and immigration lockups. Approximately 16,000 of those women are in federal prisons.

Often women are forced to choose between a limited supply of free, paper-thin pads and paying for tampons with a high markup from the commissary (sometimes 50 cents or more).

While 50 cents per tampon might not seem like much, the price per period can add up quickly. Plus, when incarcerated individuals make just pennies per hour, it can take hours of work to purchase one tampon.

Incarcerated women without adequate access to menstrual products report crafting improvised pads and tampons with socks, mattress stuffing, and toilet paper, so that they don’t bleed into their clothes.

In one Michigan lockup, 30 women were required to share a pack of 12 pads.

In Indiana, jail staff failed to provide one woman with menstrual products for a full 36 hours, then gave her just three pads and one tampon. The woman bled through her jumpsuit, and onto the floor where she had been forced to sleep.

In many facilities, women receive an inadequately limited number of sanitary pads and/or tampons.

Corrections staff also use menstrual products to exert control over the women under their supervision, the report says.

A Department of Justice investigation revealed that officers at the Tutwiler Prison for Women in Alabama would threaten to deny access to menstrual products to women who refused to have sex with them. “Prisoners there were forced to choose between the humiliation of going without menstrual products for months at a time and being raped by men who had power over them,” the report states. “The already dangerous power dynamics of prison were significantly worsened by a toxic mindset that menstrual products could be withheld from prisoners.”

Kimberly Haven, a woman impacted by menstrual inequality in corrections who contributed to the report, has used her own experience to launch a campaign to ensure access to period supplies in carceral facilities across the nation. “There is no dignity, no humanity, no compassion in a system that makes a person have to beg, borrow, or even make her own basic hygiene items,” says Haven, who was forced to craft her own menstrual products, which she says ultimately resulted in a medically necessary hysterectomy.

“The health risks that people take to provide for themselves the most basic of products are incalculable,” Haven says. “From toxic shock, to infection, to infertility, it is a game of Russian roulette and not a price that anyone should have to pay.”

According to the report, New York City implemented the first menstrual equity legislation in the U.S. in 2016, guaranteeing women and girls the right to free menstrual products in jails, homeless shelters, and public schools.

Just one year later, California passed a law requiring all incarcerated individuals who menstruate be provided with free menstrual products upon request. (California is also one of just four states that guarantee access to period products in public schools.)

While the report praises the growing movement toward menstrual equity, the authors also stress that much more must be done to ensure that women and girls have the basic supplies they need every month.

Most of the state laws are not funded by the state, which means that the burden to pay for such products falls on schools, jails, and homeless shelters.

The report recommends that all U.S. states require such facilities to provide access to menstrual supplies, through funded mandates.

“It is unfathomable to me,” Haven says, “that, in 2019, we even have to have this conversation and that sadly we must use legislation to ensure that those we incarcerate have what they need, in the quantity they need and that no one has to make their own tampons.”

Image by Federal Bureau of Prisons.