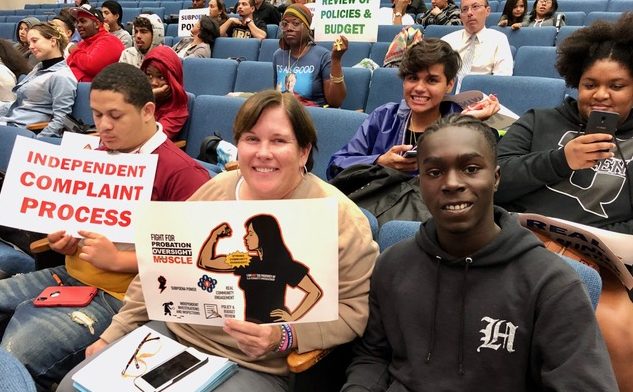 At Monday’s Board of Supervisors meeting, prior to the vote on Los Angeles County’s 2020-21 budget, the fact that a critical program had been defunded at the last minute was not really discussed, and few beyond those on the board knew the program had been slashed.

More on the slaughtered program in a minute.  But first the LASD.

Most of the time at Monday’s virtual meeting was taken up by the drama around the $145.4 million that was being cut from the $3.5 billion budget of the LA County Sheriff’s Department.

(Interestingly, the money to be cut from the sheriff’s budget is a few million less than the $150 million that the LA City Council voted on Wednesday, July 1, to cut from the budget of the Los Angeles Police Department’s $1.86 billion dollar budget. Did we mention that the LASD budget is more than twice that of the LAPD?)

“This is literally balancing the entire county budget on the back of the LASD,” Sheriff Alex Villanueva wrote of the cut in a very unhappy public statement on the sheriff’s department website.

After that, he held an even more unhappy press conference on the same topic, Monday morning, the day of the board meeting.

In the statement and at the virtual presser, Villanueva said that it was the LA County CEO who had proposed that the following important LASD units be eliminated:

Yet, when questioned on the topic in the course of the board meeting, CEO Sachi Hamai explained that all that stuff the sheriff said about what she wanted to slash was not…you know….true.

According to Hamai, after the sheriff learned of the dollar amount that was likely to be cut from the LASD budget, he was the one who proposed cutting “unincorporated area patrol, the Parks Bureau, the Special Victims Bureau, Operation Safe Streets, and the Community Partnership Bureau [COPS], et al.

“These are the sheriff’s own recommended cuts,” not hers, Hamai said again, in case anybody missed the point.

Villanueva’s plan, she said, would have eliminated 1,125 vacant positions in the department and would have resulted in “894 potential layoffs.”

Instead, Hamai said, she cut the number of layoffs proposed by the sheriff “nearly in half.”  Then her staff identified an additional 437 vacant positions “instead of imposing the 894 layoffs as the sheriff had proposed.”

She also wanted to emphasize, said, Hamai, that any remaining layoffs would come entirely from custody operations — in other words, the jails — which she thought was a better choice “given the significant reductions in the jail population.”

(Readers may remember that, during the first months of the COVID-19 crisis, Sheriff Villanueva was successful in dropping the county’s jail population from over 17,000  residents to around 12 thousand, which is generally where it remains today, an accomplishment that has been rightly praised.)

During the meeting, the board and the CEO also clarified another confusing LASD issue, this one having to do with the initial rollout of the body-worn cameras for the sheriff’s department.  In the beginning, it turns out, the body cameras will not go to all the sheriff’s stations, but only likely to five stations, although eventually, the cameras will roll out to all the stations.

Furthermore, the East LA Station is reportedly not one of the stations that will be part of the initial rollout.

This last piece of news about East LA did not please the supervisors.

Learning that the pilot program won’t be East Los Angeles,” said Supervisor Kathryn Barger, “to me strikes at the very core of why this program is necessary.”

So what about LA County Probation?

When it comes to law enforcement budget-cutting or defunding in Los Angeles, the focus of racial justice activists and community leaders has been aimed at the LAPD  and, more recently, the LA County Sheriff’s Department.

Yet, there is one other major law enforcement agency in Los Angeles County, that has drawn far less attention.

That agency would be the LA County Probation Department, which in recent years has had a budget of close to a billion dollars, although in 2020-2021 the total will be slightly lower.

In the past few years, probation has closed nine of its youth facilities, as the department’s youth population shrank yearly, and youth crime continued to dive. Yet, its budget did not shrink commensurately.

Furthermore, probation is set to get a brand new funding stream from the state next year when the Department of Juvenile Justice (DJJ), California’s chronically troubled youth prison system, will be shuttered permanently. This means the kids who would have originally been sent to the state’s three lock-ups and a fire camp, will now remain in the various counties.

The upcoming shutdown also means that the state will give each of the counties a sizable amount of cash to keep the former DJJ kids closer to home. And since LA has traditionally sent the most kids into the state lock-up, it means that our probation department will almost certainly get the largest portion of that new state money stream.

Yet, when it comes to the 2020-21 budget, although probation took a cut of $49.1 million and 425 positions on Monday, according to the CEO, those cuts primarily came from the closing of two of its facilities, Los Padrinos Juvenile Hall and Challenger Memorial Youth Center.

(We’ll have more on LA County Probation’s use of $$ in an upcoming story.)

What did take a drastic cut during Monday’s final vote, was the much-praised, supposedly soon-to-launch, LA County Probation Oversight Commission (POC) — namely the one entity that was to be given the power and the staff to oversee the nation’s largest probation department.

For those who need a reminder of why the POC is important, here’s the deal:

On Tuesday, October 1, 2019, the Los Angeles County Board of Supervisors voted unanimously — and historically — to create a civilian oversight body with the power to both watchdog and steer the nation’s largest probation department through the process of fundamental reform, which was primarily to be aimed most urgently at the youth side of the department.

The fact that LA County Probation urgently needed to reinvent itself was no longer up for debate.

Thus in 2018, a temporary blue ribbon “Probation Reform and Implementation Team”—or PRIT was tasked with researching and creating a detailed plan for how this new Probation Oversight Commission, (POC) ought to function.

In its 15 months of existence, the PRIT held a series of well-attended public listening sessions across Los Angeles County, which attracted sometimes up to a couple of hundred community members, justice advocates, invited subject matter experts, and an increasingly large group of working probation staff members.

Finally, a little over a year ago, the PRIT delivered a 28-page plan for creating the POC.

Then at the end of January 2020, the board delivered another historic vote when it gave the soon-to-be-up-and-running POC subpoena power, which was to be funneled through the Office of the Inspector General. To make this work, the OIG would be given some new, POC-dedicated staff members.

Yet, in the five months after the January vote, everything seemed to stall. First, the county dragged its feet on posting the job listing for the executive director of the POC, which was the first essential step in bringing the commission to life.

Then, a few weeks ago, WitnessLA heard from several sources that, in the face of drastic COVID-19 cutbacks, the POC might get zero funding. It would not exist.

“I think all of the supervisors’ offices want the POC to be funded,” one source told WitnessLA. “It’s just that the budget situation is so dire.”

In April’s preliminary 2020-2021 budget, which came out before the full size of the COVID-19 fiscal disaster had truly been apprehended, the POC was funded to the tune of $2.4 million, for an executive director and four other positions, plus start-up costs.  Not as much as it needed. But it was a good beginning.

In addition, the Office of the Inspector General, which is slated to be the investigative arm of the POC, was also to receive some extra funding in order to hire additional POC-dedicated staff.

At the meeting this past Monday, however, when the board actually voted on the “recommended adjustments” to the April budget, everything POC-related fell into the category of deleted expenditures, including the additions to the OIG. (You can see the listed deletions at the bottom of p. 7.)

And that was that. The POC was dead.

The nation’s largest probation department, an enormous agency that was still operating from a law enforcement framework, instead of a healing, “care first,” youth development model, would have no new oversight body that had the power to push it toward the kind of real reform that, if done correctly, would continue to proactively shrink the youth side of probation in favor of community-based solutions.

When WitnessLA passed along the defunding news to Saúl Sarabia, who served as chairperson of the blue ribbon PRIT panel, he expressed sentiments that captured the alarm of several other activists we spoke with about the matter.

“During the 15 months of public-listening sessions, various Los Angeles communities most impacted by probation’s kid-harming dysfunctions expressed skepticism that this new commission idea would ever come to anything,” said Sarabia.

Gradually, the volunteer PRIT panel appointees, and the community members who showed up at the monthly meetings, overcame their skepticism, he said, “when the board of supervisors unanimously adopted a POC design with ‘teeth,’ including subpoena power through the OIG,” all of which “increased community confidence that the Board’s Justice Reform agenda was real.”

“The challenge from the Black Lives Matter movement,” Sarabia said, “is that decision-makers like the board meet the moment – not by claiming that a loss of tax revenues demands austerity for all – but by acknowledging we have been pouring hundreds of millions each year to troubled agencies like probation, acting to divest from them as we reimagine public safety, and funding initiatives that can produce racial justice.”

Later on Monday, after the board meeting had ended, Supervisor Mark Ridley-Thomas sent out an emailed statement.

“We …cannot afford to delay creating the Probation Oversight Commission and to expand the powers of the Inspector General, both of which strengthen accountability,” he wrote. “This is the time to further invest in community-centered solutions that give us the best and highest return for our communities.”

But for that the POC needs a freaking budget!

Resurrection on the horizon?

Then, today, Wednesday, the fate of the POC may possibly have changed again.

WLA acquired a copy of a brand new motion authored by Ridley-Thomas and Supervisor Janice Hahn, that if passed, will direct the CEO to locate “ongoing funding in the FY 2020-21 Supplemental Budget” to restore the POC-related allocations in April’s recommended budget, “including staffing and supplies for the initial implementation phase of the Probation Oversight Commission as well as the dedicated Probation Department’s oversight unit within the Office of Inspector General — all accomplished by “curtailing additional vacant budgeted positions in the Probation Department.”

Oh, and the CEO should immediately begin “the recruitment and hiring” of the Executive Director for the POC.

No, it’s not at all a done deal. But as the motion pointed out, “Recent national and local events, have only reaffirmed the urgent need to establish oversight entities that can increase accountability for criminal justice agencies.”

Top photo, October 1, 2019, shortly before vote by LA County Board of Supervisors to create POC, an oversight board “with teeth,” via WitnessLA