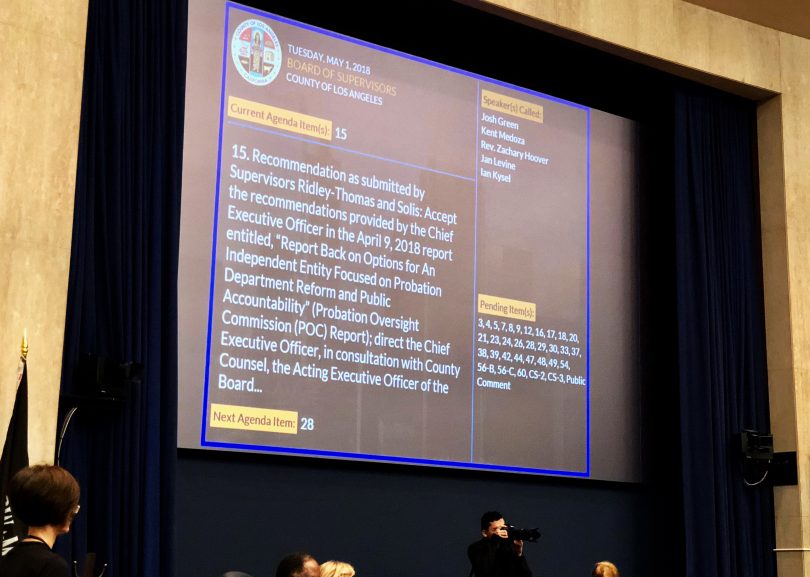 Around 12:30 on Tuesday afternoon, the Los Angeles County Board of Supervisors voted unanimously to create an independent oversight commission to act as a watchdog for the nation’s largest probation department, which oversees approximately 9000 children and 47,000 adults.

As we reported Monday, this has been a long time coming.

According to the LA County CEO’s savvy and to the point 11-page report, which underlies the motion, the creation of the new commission is wisely being organized as a two-step process.

The first step is for the county CEO’s office to establish a “Reform and Implementation Team,” that will come up with a staffing and funding plan for the permanent Probation Oversight Commission, (POC) and will also work out the mechanics of how the existing Office of Inspector General will expand its duties to provide an investigative arm for the new commission.

Another crucial function of this temporary team is the task of synthesizing “decades worth of reform recommendations for probation” into a single unified vision for reform that weaves together the most important parts of these piles of pricey reports into a single roadmap that the department can use to move forward, while the POC acts as a watchdog to make sure probation stays on the newly mapped road. As we’ve pointed out before, a Probation Commission already exists. But the existing commission has no budget, no real staff, no investigative abilities, and basically no power except that which the various very knowledgable commissioners can grab in public meetings simply through force of will and personality.

The new POC will be, in certain ways, a much strengthened and expanded version of the old commission. It will, in other words, build upon the existing charter responsibilities of the old commission, simply because, as it turns out, according to County Counsel’s lawyers, that’s the most efficient way to do things—legally speaking—rather than starting over from zero.

“The board itself has demonstrated time and time again that reforming the county’s probation department is important,” Supervisor Mark Ridley-Thomas said opening the discussion period, and hour and a half before the actual vote in the supervisors’ meeting room located in the Kenneth Hahn Hall of Administration on Temple St, in downtown L.A.. “Now we’re focusing on making it a priority.”

Ridley-Thomas is the motion’s co-author along with with Supervisor Hilda Solis.

“The board wants to ensure that the new probation department and its leadership is positioned for success. Overhauling a department that has struggled for decades to effectively use resources, hire, promote and support the right staff, and rehabilitate and serve both youth and adults is obviously not easy. …Each day,” he said, more is learned about the deep” and “entrenched challenges and problems.”

Thus it is ultimately the board’s responsibility “to step up like never before….”

No staff, no budget…

Jan Levine was one of more than 20 people who came up to the row of mics at the front of the room in order to speak passionately in favor of launching the commission.

Levine is a member of the current Probation Commission, a former Los Angeles juvenile court judge, and a longtime volunteer in probation’s youth camps, and its crumbling Central Juvenile Hall. She talked about how chronically hampered her commission has been because of its lack of a staff or a budget.

“We can barely get” the minutes “of our hearings written,” Levin told the board. Levine stressed the importance of the new commission’s ability to provide a “forum for families and other stakeholders to participate in an ongoing two-way exchange of information about department policies and practices.”

The new POC will also have the ability to do an ongoing “review” of department budgets “and spending to insure actual and meaningful support for best practices,” she continued.

Levine also noted the plan for the new commission to track data concerning any of the department initiatives, thereby creating “evidence about outcomes” so that the department’s decisions “can be adjusted as needed.”

Jacqueline Caster was another one of the members of the existing commission who spoke in favor of the motion, while pointing to the problems of the status quo. Jacqueline Caster, probation commissioner and founder of the Everychild Foundation/WLA

“I cheer the fact that the new oversight commission would report directly to you, the supervisors,” said Castor, a former lawyer, who is the founder of the Everychild Foundation, which provides grants to nonprofit agencies serving vulnerable LA children. This direct report arrangement, she said, “will add badly needed accountability,”

Another of the “disheartening,” issues Caster pointed to as emblematic of the need for reform was the lack of “an independent written and hotline grievance system” for the kids in the county’s juvenile halls and camps. The existing system, she said, “makes it difficult for the children” in the county’s care”to report on a problem without fear” of retribution—“whether perceived or based in reality.”

Most of those who spoke in favor of the motion to trigger the commission talked about the need for reform on the juvenile side of probation. But, Susan Burton, the founder of A New Way of Life Reentry Project (and author of Becoming Mrs. Burton) talked about the adult side of the department, which she said was “a train” that had “gone awry”—hence the need for an oversight commission. Burton mentioned her nationally-known organization, which provides housing and support to formerly incarcerated women in order to help them successfully reenter their communities, plus her own experience with the probation system.

“I’ve been a recipient of the services of the department of probation,” she said. And her program, A New Way of Life, houses “women who are currently being supervised by probation.” And while she said she likes the agency’s chief, Terri McDonald, according to Burton, the problems of the agency were “beyond what any one person can correct.” “Probation has a billion dollar budget not only to supervise but help folks get back on their feet. They fail at both,” Archie said. “When they supervise, they are invasive and show up at folks’ work, or home, with vests and guns like they are going to war.”

Archie described officers showing up at A New Way of Life “like G.I. Joe….pulling folks out of their safety net for a shakedown.” The department would be better off “helping people find stable housing,” Archie said.

The speaker list also included such people as Brian K. Williams, the executive director of the Sheriff Civilian Oversight Commission, and Max Huntsman, the Inspector General, whose office—it has been proposed—will serve as the investigative arm of the new Probation Oversight Commission.

Moreover, the new commission’s structure is to be designed to “mirror” the structure of the LASD’s oversight commission, that Williams now heads.

Huntsman too praised Probation Chief, Terri McDonald, whom he worked with when she headed up the custody division for the Los Angeles County Sheriff’s Department, he said. But, Huntsman noted, it is “a difficult process to bring in the public and to get them involved” as such oversight bodies must do. A slew of speakers later, Kent Mendoza—who is the policy coordinator at the Anti Recidivism Coalition or A.R.C., the organization founded by film producer, Scott Budnick—addressed what he described as the need for community members who’ve had personal experiences with probation to be part of the new commission. To further make his point, Mendoza told the board that A.R.C. “looks forward to staying engaged during the implementation process,” and is happy to serve as a partner to the county and the probation department “to help ensure the reform happens and we serve the people who really need this.”

Finally, after more than an hour of speakers, and a small delay for motion co-author Hilda Solis to keep a must-attend meeting, the vote was taken. It was unanimous. And that was that.

Much earlier, during the long string of speakers, we asked Probation Chief McDonald how she felt about everything. She gave what appeared to be a genuine thumbs up.

After the vote, McDonald had to rush to catch a flight back east to speak before some organization or other.

But before her plane left the ground she sent us her official reflection on the day’s decision.

McDonald and her team were “look forward to working with the interim team and the newly configured commission,” she said, with the “mutual goal of working collaboratively and transparently to ensure Los Angeles County Probation is the best in the nation.”

There was much to build upon, the chief continued, “many positives to share” but also “significant work ahead”—work that requires “focus, strategic planning and resources” to ensure the the department’s officers “have the tools that they need” to improve upon probation’s mission “of being a client-centered public safety agency.”

She and her team, she said, were “looking forward to rolling up our sleeves for the work that awaits us.”