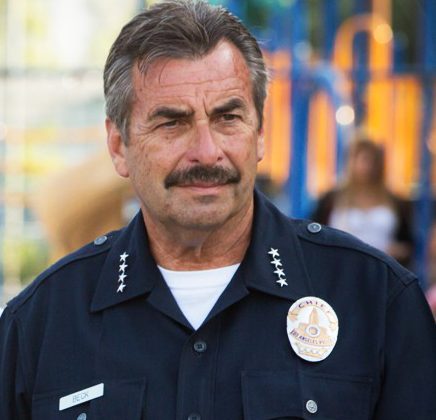 On Friday, January 19, at an otherwise routine press conference with Mayor Eric Garcetti, Los Angeles Chief of Police Charlie Beck abruptly announced his retirement, startling even some of the officers who had accompanied him to the press event.

“Serving the citizens of Los Angeles for over 40 years has been the honor of a lifetime. Leading the men and women of the #LAPD—my family—has been a privilege I never thought I’d be worthy of,” Beck wrote shortly after the announcement in a series of tweets.

“I plan on working every day until that day as the Chief of the greatest law enforcement agency in the country. I believe we are in the right place to support my decision, and give the next generation of #LAPD leaders an opportunity to lead.

“The department is ready for fresh eyes to take our organization to even higher levels. Thank you Los Angeles for allowing me to serve you for all these years. God bless all of you, and god bless the Los Angeles Police Department.”

The news, while unanticipated in the moment, was not unexpected. Those who know Beck well had long thought that, when he felt the time was right, he would step away from the chief’s job, whether his latest five-year term was finished or not. During last Friday’s announcement, Beck made it clear he believed that the departure date he had chosen was the right one for him personally, and for the department he loves.

While the LAPD is, in many ways his life, being chief is not something that defines Charlie Beck, said one longtime department friend, who asked not to be named. “He has never been enamored with the power of the job.”

Approximately a nano-second after Beck made his decision public, talk began about who might succeed him, and whether that person should be an insider or an outsider. Names began to be floated.

Talk also began about how Beck’s more than eight-year tenure as the city’s top cop will ultimately be assessed. The answer to that question, not surprisingly, differs greatly, depending on who is doing the assessing.

The Los Angeles Times editorial board asked if police shootings would “taint” Beck’s legacy. In general, however, the Times praised Beck who, the board wrote, “helped instill a more open, reform-oriented culture.” He was smart, the editorial board said, “and his heart was in the right place,” adding that Beck’s embrace of departmental reform in the post-Rampart era “was a strong signal to the rank-and-file, to the city’s political leaders and to communities that often suffered brutal policing tactics that the new thinking and new practices were there to stay.”

Yet, they further noted that when Beck and the department found the fatal shooting of mentally ill man, Ezell Ford within policy, the police commission sharply and publically differed.

With this latter point and a list of related issues in mind, Dr. Melina Abdullah, the respected chair of Pan-African Studies at California State University, Los Angeles, who is also one of the highest profile organizers for the LA branch of Black Lives Matter, looked at Beck’s upcoming exit as a victory for the chief’s critics.

“On Friday we #FiredBeck for leading the #MostMurderous police department in the nation,” she posted on Instagram the day that the chief made his announcement. “We camped out at police headquarters (18 days), the mayor’s residence (3 days), city hall (54 days), wrote, circulated and signed a petition signed by 1000s of Angelenos, wrote articles, sat on panels, organized protests, went to police commission meetings every single week, got arrested, subjected ourselves to police targeting and abuse, called the mayor’s office every single day, flyered neighborhoods, held meetings, prayed, chanted, and fought, and fought…and today…WE WON! #ByeByeBeck.”

Father Greg Boyle , who is the founder of Homeboy Industries, the nation’s largest gang intervention, rehabilitation and re-entry programs program in the nation, and the author of Tattoos on the Heart, and the recently released, Barking to the Choir, had a different point of view.

When we asked him, via email, to respond to Beck’s announcement, he wrote back about his experience a Friday night panel where he was featured. “One of the panelists,” he said, “mentioned that Charlie had announced his resignation earlier that day…and a young woman clapped and yelled joyously.

“I thought to myself, ‘You’re young…you don’t know any better. I’ve lived in LA for half a century. Charlie [is] hands down the best chief probably in the department’s history.’” Looking back to look forward

When he leaves the department in five months, tall, craggy-faced Beck, will have worn the LAPD badge for more than 41 years. He became a full-time sworn in March 1997, after having spent two years in the department’s reserve program.

Prior to going into law enforcement, Beck had planned to ride motocross professionally.

In fact, in November 2009, when Beck was chosen by then Los Angeles Mayor Antonio Villaraigosa to replace Bill Bratton as chief of the LAPD, he still competed in motocross events and was, at that time, in all seriousness, the Police and Fire Motocross national champion.

Still Beck has always been seen as a cops cop. His father was an LAPD deputy chief. His sister was a detective. His son and his daughter both work for the department. He met his wife, who has retired from the Los Angeles Sheriff’s Department, through police work.

Yet, unlike some of his contemporaries, Beck never seemed to long for the top job. In fact, when Bratton stepped down in 2009, Beck was already enrolled in the department’s Deferred Retirement Option Plan, or “DROP” system, an optional, voluntary program that allows an officer to “retire,” then be rehired by the department for a five-year period. The plan benefits both the city budget and the “retiree.” But, after five years, he or she is out.

In other words, Beck was already semi headed for the door when he was persuaded by the departing Bratton, civil rights attorney, Connie Rice, and others, that he was the right insider to follow-up on the reforms that the high profile east coast outsider chief had already instituted in Los Angeles.

At the time, Beck had worked assignments across the departmental spectrum: gang units, undercover narcotics, Internal Affairs. His star began to rise most precipitously in 2006, when Bratton promoted him to Deputy Chief and gave him command of the agency’s South Bureau where he gained a strong reputation for working successfully with the hard core gang intervention groups, which were staffed by former gang members, that many previous commanders in the department had long shunned.

When Bratton moved Beck again to take over the detective bureau, he became problem-solver-in-chief, taking on the faulty fingerprint analysis debacle that was a department embarrassment, and then the rape kit backlog mess after that. Of the three finalists, he was the one openly talked about as Bratton’s choice to succeed him. In the eight plus years between 2009 and now, Beck continued his problem-solving, reform-minded efforts, which were mostly successful. Yet, he also made a few vexing mistakes, including a some glaring inconsistencies in officer discipline, along with a spate of misclassifications of crimes that occurred on his watch. And he presided over at least one prominent catastrophe, namely the 2013 murderous rampage of rogue officer Christopher Dorner who began targeting police officers and their families in a one man reign of terror after writing a rambling manifesto that detailed how he felt marginalized by still present departmental racism. Some department members, while condemning Dorner’s horrific actions, said that, when it came to the lingering but corrosive racism, Dorner did not have that part wrong.

The following year, Michael Brown was shot in Ferguson, Missouri, on August 9, 2014. Four days after that, on August 11, in South Los Angeles, Ezell Ford, a mentally ill man familiar to the police, was shot and killed by LAPD officers, and to many, these and other shootings suggested an alarming pattern.

In 2016, two years later still, Beck talked about the issue of police shootings on KPCC’s Larry Mantle, and expressed his frustration over what he described as the lack of candid dialogue that he felt was too often missing from that national and the local discussion on the topic. Instead, he said, “people” pontificated, “only presenting their point of view and not listening” to other people.

“Nobody strives for empathy, nobody tries to understand the view of others,” Beck said. “Everybody just go to their polarized opposites. We’ll never get closer to a solution if people try to do that.”

That same year, Beck talked to Joe Domanick, for an interview that was cross published in WitnessLA and the Crime Report.

Dominick the assocate director of John Jay College’s Center on Media, Crime and Justice, and the author of two books on the LAPD: To Protect and to Serve, and Blue; The LAPD and the Battle to Redeem American Policing,. The chief’s answers to two of his questions in particular are interesting to read today.

Domanick: What do you want to get done during the remaining three years of your term?

Beck: I want to get back on track with crime, be the model in building community trust, and get people to have faith in this police department to the extent that the national conversation [about how police abuse] may have damaged it.

Domanick: LA has a long history of combative LAPD chiefs like Ed Davis, Daryl Gates and Bernard Parks who warred with the media and other critics, and made the LAPD all about themselves. Even Bill Bratton, who courted the press and public, made the department about ‘Bill Bratton the Reformer.’ You on the other hand, have kept a remarkably low profile. Why?

Beck: The chief of police should not be everybody’s focus of interest.. My ideal scenario is having a police department that [the public] believes in more than they believe in the chief. I have got a finite time [in office], a goodbye date. I have to create an organization that will continue [to get better]. We made huge progress in Bratton’s administration and hopefully in mine. I want that to [pass that on] to the next chief.

As Chief Beck said last Friday, the five month lead time his announcement eliminates the need for an interim chief, while also giving the city plenty of time for “an exhaustive search to find the right chief.”

We will, of course, be watching that process closely.