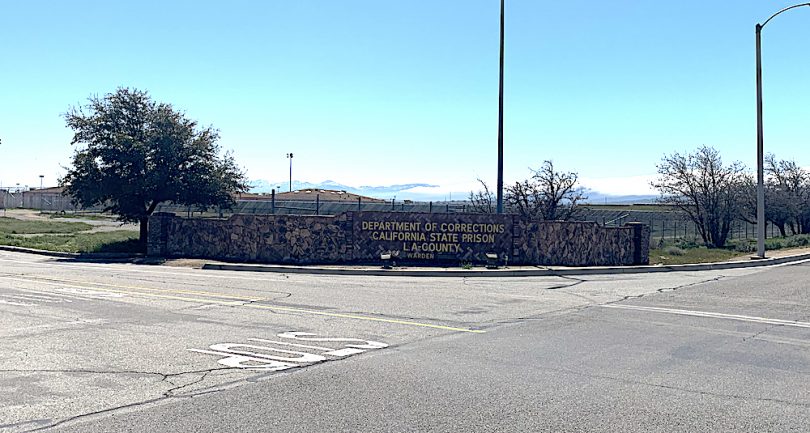 Prison officials have now reportedly provided every incarcerated person with two cloth masks that must be worn in all dorm settings and in any situation outside a cell (like yard time and canteen trips), and to and from medical visits.

Between March 25 and April 12, California corrections officials reduced the state’s prison population by 6,758 people in an effort to combat the spread of coronavirus throughout the prison system.

As of Monday, April 13, there were 133 confirmed cases of COVID-19 within California’s state prison system — 55 prisoners and 78 staff members. A total of 558 prisoners have been tested. (Prison employees self-report their cases.)

The numbers across the system have multiplied at an alarming rate over the past month.

On March 25, one prisoner and 9 staff members had tested positive for the coronavirus. Five days later, on March 30, there were four prisoners and 22 employees with confirmed cases of the virus.

By April 5, 17 prisoners and 53 prison employees had tested positive for COVID-19.

The California Institution for Men, in Chino, has the highest concentration of COVID-19 cases, followed by California State Prison, Los Angeles County, in Lancaster.

The state has taken steps to reduce the prison population and shuffle some 500 inmates out of high-density housing units.

On March 24, two days after the first confirmed COVID-19 case among the state’s prisoners, CA Governor Gavin Newsom issued an executive order suspending transfers from jail to prison, a move that was expected to reduce the state’s total prison population by 3,000 people in the first 30 days, according to the CDCR.

All eligible people were released as of April 13, according to the CDCR’s COVID-19 page.

While a few prisons are less than 100 percent full, most still land well above full capacity — five prisons, several of which have COVID-19 cases, were more than 150 percent stuffed as of the last official count, on April 8 — and the system as a whole was at 128 percent capacity. (This number will drop a few percentage points on the next scheduled count, on April 15.)

Last week, the Lancaster prison, where there are 26 COVID-19 cases, remained at 138.6 percent of capacity. California Institution for Men, where the outbreak is heaviest at 59 cases, was still at 115.3 percent capacity.

These two prisons bear 64 percent of the coronavirus diagnoses in the state’s 35-prison system. No other prison has more than 6 total cases, so far.

In addition to releases, each of the state’s prisons are in the middle of a two-week soft lockdown. During the lockdown, prisoners are eating in their cells and visiting the yard and performing other essential tasks in smaller, staggered groups. According to the CDCR, telephones and showers are disinfected after every use.

Attorneys representing prisoners in two lawsuits over medical and mental health care in CA prisons have argued that the current strategies are welcome, but that facilities remain overcrowded in ways that put medically fragile prisoners at unnecessary risk.

On March 25, as the coronavirus was just starting to dig into the prison system, the Rosen Bien Galvan & Grunfeld and Prison Law Office attorneys asked a federal three-judge panel to step in with an emergency order forcing the state to protect medically fragile prisoners by reducing the prison population cap, which the panel has overseen for a decade.

On April 4, the judges said they could not intervene through the panel, but suggested different ways the attorneys could seek intervention from the federal court to “prevent the life-threatening spread of COVID-19” in prisons. In it’s decision, the panel suggested the law firms file new separate motions with one or both of two of the judges on the panel who are each overseeing class-action lawsuits over prisoner mental and medical health care.

The attorneys quickly moved forward with new motions, and U.S. District Judges Jon Tigar and Kimberly Mueller are now digging into the question of whether the state must do more to reduce the risk to prisoners and staff, through expanding early releases, moving more prisoners out of crowded state facilities and into other lockups, or through other means.

(We’ll have more on what’s going on in the courts later in the week.)