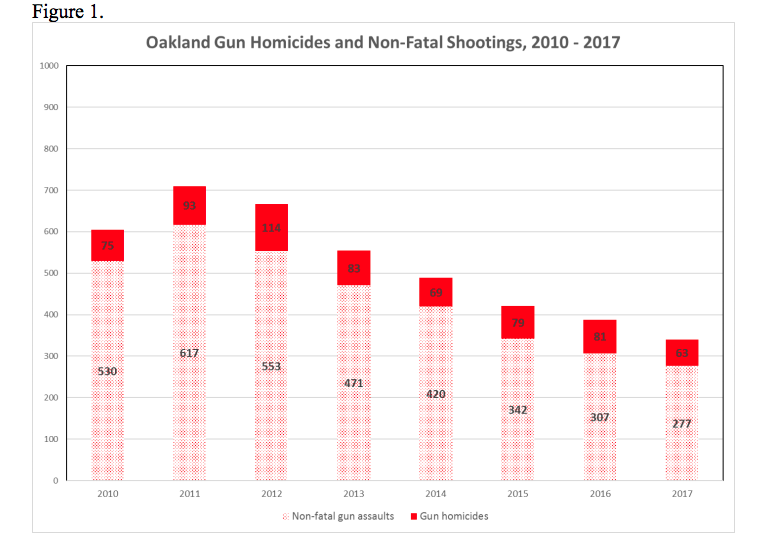 Oakland city leaders, including Oakland Police Chief Anne Kirkpatrick, have announced the results of a new study crediting Oakland Ceasefire program with a 31.5 percent drop in gun homicides citywide. The study, led by Northeastern University’s Anthony Braga, also found that gang-involved shootings decreased by 43.2 percent over the study period, from 2010 to 2017.

In 2012, Oakland’s homicide rate was nearly 6.8 times higher than the national rate. The next year, through an interagency partnership, the city launched Ceasefire, a program focused on reducing gun violence by identifying those Oaklanders who had the highest risk of committing a violent crime or becoming a victim of violent crime, and offering them social services, mentorship from community organizations, employment opportunities, and even cash, with the hope of preventing violence and improving outcomes.

According to the study, less than one percent of the city’s population was connected with two-thirds of Oakland’s gun violence.

“Our Ceasefire strategy is about changing behavior, not arresting our way out of the problem,” Mayor Libby Schaaf said of the program. “Our community has come together to offer individuals a new path forward, and this study proves that while we have made great strides to save lives and reduce the trauma of gun violence in our neighborhoods, we still have much work to do.”

There were 93 gun-related homicides and 617 injuries from assaults with firearms in 2011, according to the report. By 2017, the total number of gun victimizations dropped by 52.1 percent to 63 murders, and 277 non-fatal gun-related assaults.

Those who worked on the report controlled for population differences, violent crime trends, seasonal effects on crime, and other factors, the research team analyzed monthly gun homicide counts in each city between 2010 and 2017, using the counts to “estimate the existence of post-2013 gun violence reduction impacts.”

The report concluded that Ceasefire had affected Oakland’s gun crime rates, helping to bring about a 31.5 percent reduction, while controlling for those other factors. Just two of the 12 comparison cities (Stockton and San Francisco) experienced significant reductions in gun violence across the years studied.

Still, Ceasefire is not without critics. Versions of the program in other jurisdictions across the nation have been controversial.

And, according to the report, those who participated in the in-person “call-ins” with police, prosecutors, clergy, service providers, and community organizations told researchers they were concerned that the meetings were not always “conducted in a respectful manner,” according to the report. Some reported that the meetings felt coercive and exploitative, reinforcing participants’ distrust of law enforcement and the criminal justice system.