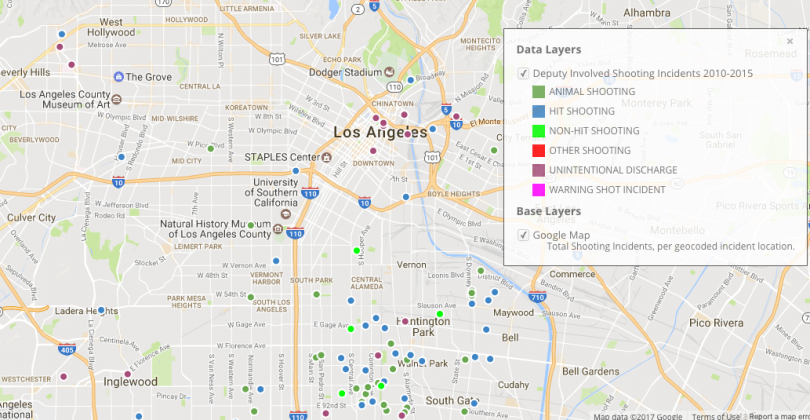 On Thursday, the civilian oversight commission for the Los Angeles County Sheriff’s Department voted unanimously in favor of calling on Sheriff Jim McDonnell to release more data on discipline and complaints, as well as shootings and other use of force incidents.

Back in 2015, the department launched an online data sharing project that offers statists and information about shootings to the public.

Critics say the data portal should share even more information to improve transparency.

According to Huntsman’s report, the sheriff’s department “is not keeping pace with law enforcement best practices employed by many of the other major law enforcement agencies in California and across the country” with regard to data sharing.

The commission’s resolution calls for the release of total number of deputies and custody assistants that are disciplined. The discipline numbers should be divided up into categories of misconduct and seriousness of discipline received.

In addition, the public data should include “all legally disclosable information” about officer-involved shootings, including a short narrative of the incident.

Non-lethal force incidents, including kicks and weapon strikes to the head, canine bites, any uses of force that results in hospitalization or death. Brief narratives and discipline information would further the department’s work to increase transparency and accountability.

The commission also wants information regarding civilian complaints against department members, broken down by type of complaint.

Additionally, the commission seeks numbers on the average daily inmate population in LA County jails, as well as information on in-custody deaths from any cause, including suicide.

According to the sheriff’s department, staff shortages and outdated technology have slowed down the department’s plans to increase public data sharing.

The oversight commission held its first meeting at the beginning of the year. The vote marked the first time the nine-member commission voted to put pressure on the sheriff. The commissioners do not have the power to force the department to publish the data, however.

The commission directed the sheriff to return in 60 days with a report on the department’s progress implementing Huntsman’s reforms.