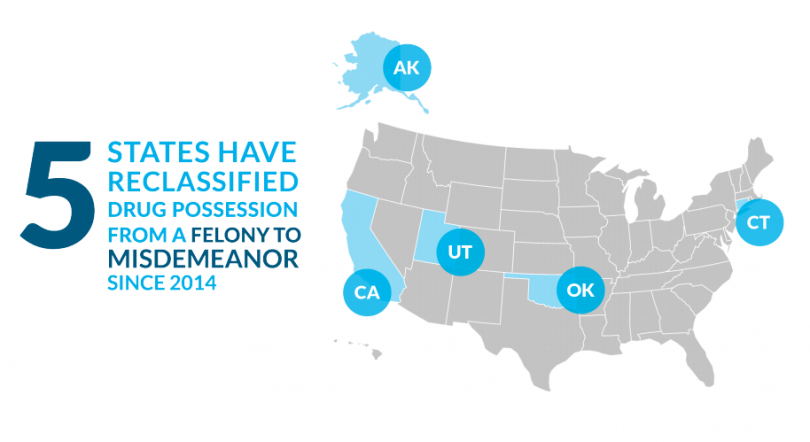 A new report from the Urban Institute looks at the effect of these reform laws on prison populations, economics, and communities and how other states might fare if they followed the lead of CA, UT, CT, AK, and OK where the bills and measures were approved with bipartisan support.

While the five state laws are not all exactly the same, each shared three important details. First, the laws all made simple drug possession (until at least the third conviction) misdemeanors, rather than felonies. Second, the laws made it so that convictions for simple drug possession did not land people in state prison (also at least until the third conviction). Third, the five laws all applied to virtually all controlled substances, and do not give specific weight limits.

Oregon also has passed sentencing reform in this area, but individuals are disqualified from receiving misdemeanor conviction if they have more than a certain small amount of a drug (one gram of heroin, for example). People with a single prior felony are also all excluded. And people who are convicted of a misdemeanor under the new law can also be sent to prison.

In June 2017, California portioned out chunks of the $103 million in savings to 23 California cities and counties to spend on community programs focused on reducing recidivism.

The four other states also set aside savings from their own sentencing reform laws to reinvest in communities and recidivism reduction.

California’s is also the only law that was made retroactive. As of this March, petitioners have filed more than 340,000 requests for resentencing and record changes in the state. And over a million more Californians may be eligible to apply for relief under the 2014 law.

CA officials estimate that there are 15,000 fewer people incarcerated in state jails and prisons as a result of Prop. 47.

And, the Urban Institute report points out, states that have significantly reduced their prison and jail populations have seen the biggest reductions in crime.

Voter-approved Proposition 47 appears to have led to an increase in certain property crimes according to a Public Policy Institute of California report. However, crime rates remain at historic lows in the state.

Why America Needs More Laws Like These, According to the Report

More Americans were people were imprisoned for drug crimes than violent crimes every year from 1993 to 2009. While drug convictions have been on the decline in recent years, nearly 280,000 people were locked up in state and federal prisons for drug crimes. And, people of color are disproportionately represented among those arrested for and convicted of drug crimes, despite using drugs at about the same rate as white people in America.

Retroactively reducing low-level felonies to misdemeanors has been life-changing for some Californians once burdened by thousands of “collateral consequences” of a felony conviction. These barriers to successful rehabilitation and reentry include restrictions on accessing social services, gaining employment, voting, and tons more.

Other sentencing reforms, as well as the 5 states’ drug crime reclassification laws point to “a growing recognition that prevention and treatment programming provided outside the criminal justice system can be more effective than relying solely on punishment to stop illegal substance use,” the report says.

The Urban Institute concludes its report by calling on other states in enact robust, sensible drug crime reclassification laws that pump the would-have-been prison dollars into alternatives to incarceration, treatment, and other community-based solutions.