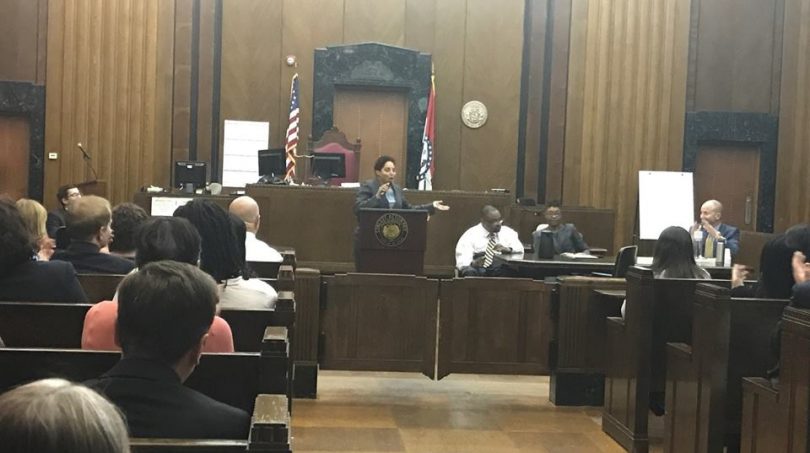 According to Gardner, last August, she reported to the St. Louis Metropolitan Police Department that her office had created a Brady list comprised of 28 officers who would be excluded from serving as witnesses in criminal cases. The prosecutor’s office said it would only accept cases from those officers if the cases could be proved without using the testimony of those problem officers. Additionally, those open cases brought by any on the Brady list would be reviewed. Within a month of the Brady List story breaking, the City Circuit Attorney’s Office had dismissed 12 felony cases connected to officers on the list, according to the St. Louis Post-Dispatch, which has closely followed the story.

The St. Louis Police Officers Association fought back, and won a temporary restraining order to block Gardner from releasing any of the names included on her list.

Gardner insists that St. Louis Police Major Michael Sack asked Gardner’s office to create the exclusion list, the St. Louis Post-Dispatch reports. “The list was created at the request of the SLMPD, not at the urging of prosecutors, as it was intended for internal purposes to ensure integrity in the system,” Gardner’s office said in a statement. “Circuit Gardner had a productive conversation with the Director of Public Safety today to ensure he was clear about her position on this important matter and to express her disappointment that the someone in the police department felt it necessary to leak this information to the media, which has resulted in fostering misinformation and fear in the community.”

Last month, a judge again handed a win to the St. Louis police union, ordering Gardner’s office and the sheriff’s department to submit to questioning regarding the list and its origins.

Now, a cadre of 55 prosecutors and law enforcement officials, including some from California, has stood up to announce support for Gardner and her Brady list. The group is joined by Fair and Just Prosecution, led by former federal prosecutor Miriam Aroni Krinksy.

“While state laws and local policies vary widely, and in some jurisdictions prosecutors’ lack of access to police personnel files effectively prevents them from maintaining such a list, we believe that the creation of a Brady list – such as the one maintained confidentially by the St. Louis Circuit Attorney’s office – is a necessary and recognized way to meet the prosecutor’s important role and ethical obligations as a minister of justice,” the statement reads.

In case you’re unfamiliar, the term “Brady list” comes from the 1963 US Supreme Court Brady v. Maryland ruling that required prosecutors to give defense attorneys any potentially exculpatory evidence–including if a testifying officer has a history of dishonesty.

“An elected prosecutor’s most important duty is to protect the integrity of the justice system. Allowing law enforcement officers with known credibility issues to influence charging decisions or reach the witness stand would be a dereliction of that duty,” said Miriam Krinsky, executive director of Fair and Just Prosecution, a national nonprofit that works with reform-minded prosecutors around the nation. “Creating and maintaining a Brady list is a recognized way to strengthen community trust, meet prosecutors’ moral and ethical obligations as ministers of justice and, ultimately, to make communities safer.”

Kim Gardner’s office is not the only agency facing legal blowback from creating a Brady list.

In 2017, then-Los Angeles County Sheriff Jim McDonnell tried to hand over a list of approximately 300 LASD members accused of lying and other misconduct to the LA County District Attorney’s Office. The local deputies’ union, the Association for Los Angeles Deputy Sheriffs—or ALADS—sued to stop McDonnell from sharing the Brady list with the DA.

A state appeals court ruled in favor of ALADS in 2017, and McDonnell appealed the decision.

Now, the issue of McDonnell’s Brady list is before the state supreme court.