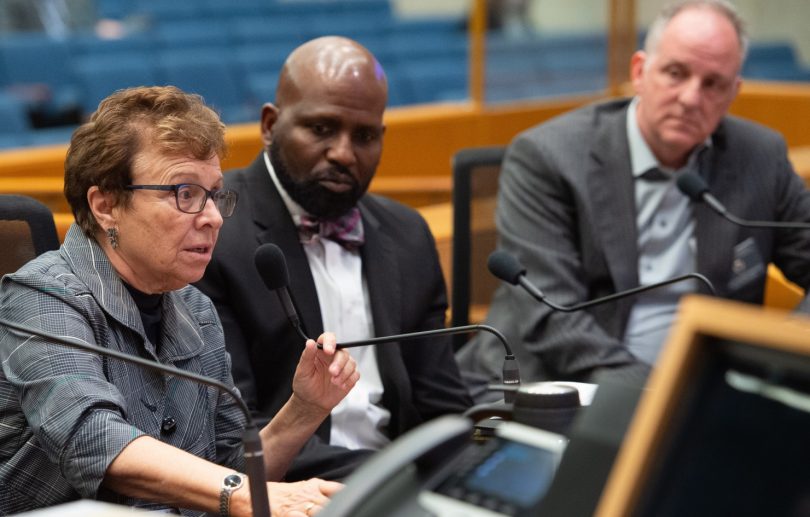 The Los Angeles County Board Supervisors want subpoena power for the  Los Angeles County Sheriff’s Department’s Civilian Oversight Commission, a concept that the board discussed four or five years ago, and repeatedly decided against.

But things have changed.

On Oct. 1, the LA County Board of Supervisors committed to making sure the soon-to-be-formed Probation Oversight Commission would have the “power to compel,” meaning subpoena power.  Practically speaking, the POC will have this power through the Office of the Inspector General, which is to act as the probation oversight body’s investigative arm.

Then yesterday, at the Oct 15, board meeting, the supervisors again voted unanimously and energetically, to take whatever steps are necessary to get this same power for the Civilian Oversight Commission or COC.  Like the POC,  the COC is slated to make use of the Inspector General as its investigative arm.

Specifically, Tuesday’s motion directs County Counsel, in consultation with the Inspector General, and the Civilian Oversight Commission (which has former judges, defense attorneys, and prosecutors among its membership) to recommend options for modifying the county ordinances in order to grant the COC access to LA County Sheriff’s Department data, documents and direct testimony in order to “fulfill their oversight function.”

With subpoena power, they will have the authority to compel the forking over of said data, docs, and testimony—within the bounds of state law–— through the issuance of subpoenas by the IG, when deemed necessary by a majority of the COC.

“The county cannot afford to erase the progress that has been achieved under recent reform efforts,” said Supervisor Mark Ridley-Thomas who, together with Supervisor Sheila Kuehl, authored Tuesday’s motion. The county, he said “must learn from recent examples, the lack of cooperation, and be open to enhancing its current structures.”

The motion also directs coordination and alignment with a previous “report-back,” motion passed in July to expand the Inspector General’s authority in order to better be able investigate secret deputy cliques.

After all, Ridley-Thomas said,  This is about public safety.  It’s about community trust.  It’s about effective 21st Century, Constitutional law enforcement.”

The rest of the board agreed, each expressing how they’d come to the conclusion—some earlier than others—that subpoena power was called for if there was to be effective oversight on behalf of the communities they served.

LA County Sheriff Alex Villanueva, according to his representative at Tuesday’s meeting, is less than thrilled at the notion, however.

To put all this in context it helps to glance a little at the back story.   For this who may have forgotten, the Inspector General’s post was created in 2014, in response to the corruption, brutality, and dysfunction that plagued the administration of former LA County Sheriff Lee Baca, and his notorious second-in-command, former undersheriff Paul Tanaka, which finally resulted in the appointment of the Citizens Commission on Jail Violence, followed by the CCJV’s scathing, 194-page report in September 2012, with its list of recommendations.  Oh and there was the FBI investigation, followed by all those federal indictments, and eventually nearly two dozen criminal convictions.

Still, when, the IG alone didn’t seem like enough, two years later, in January, 12, 2016, the LA County Supervisors voted to implement the COC, with the mission “to improve public transparency and accountability with respect to the county’s sheriff’s department” on behalf of the residents of the county.

The problem with the COC, however, was the fact that, to get any information, et al, from the department, it had to ask politely and hope that the sheriff would comply.

In the prior administration of former sheriff Jim McDonnell,  sometimes he complied and sometimes he didn’t.  But, during the last part of his time in office, cooperation between the IG and the COC, and the department, had reportedly grown reasonably good.

More recently, however, Ridley-Thomas told the crowd on Tuesday, “there were some amazing gaps in  the information we were able to receive…”

Board members seemed to have viewed these “gaps” and refusals as particularly troubling as they asked the IG to investigate the issue of secret societies inside the sheriff’s department.

The COC and the IG’s “recent lack of access to sheriff’s department data, documents, and testimony has impeded their ability to perform their core oversight functions,” Ridley-Thomas said.  So, given this situation, the board “had to re-think – and must be open to re-configuring – their authority, including granting subpoena power, in the name of stronger reform.”

“The Commission is nearing our third year of existence,” Giggins said, “and one important lesson we have learned is that as an advisory commission, our power really goes only so far. The power of the subpoena is a critical tool to be an effective oversight body. We must have the ability to sometimes make the Sheriff’s Department do what they don’t want to do—shine a light where one must be shone.”

In her statement, Giggins pointed to a couple of letters to the sheriff that illustrate instances of noncooperation.  In one instance, the COC had requested information, and in another letter in May,  the COC requested the presence of several department members as speakers at their meeting in order to answer some pressing questions, but the COC’s requests were evidently blown off.

At the board meeting, Inspector General Max Huntsman described subpoena power as tool that gives the COC the “ability to force the issue,” when their requests  are met with refusal.

“That does not mean we would have to do it repeatedly,” Huntsman said, regarding the use of subpoenas.  And maybe they wouldn’t have to use it once everyone knows they have it, he said.  Once the IG’s office and the COC have explained to the department, “This is the law.  Please follow it.”

If the LASD says no, everyone goes to court, Huntsman told the board, and the varying points-of-view are litigated.

“It’s a fine process,” Huntsman told the board. “You can do it in a non-hostile way, or a hostile way, but it gets done either way.”

To put this further in context, in helps to know that, this past summer, access to information by the OIG and/or the COC was further withdrawn by the the sheriff.  Then when Huntsman didn’t respond to the sheriff’s threat that there would be “consequences” if he released a deeply researched report that the sheriff found distasteful, matters grew worse.  All at once, Huntsman himself became the target of a criminal investigation claiming he and his office had departmental information that he shouldn’t have, never mind that it was reportedly all information that the OIG  had been given by the previous sheriff, appropriately and legally.

With subpoena power most such conflicts would be pushed into the sunlight of open court.

On behalf of the people

Although invited, the Sheriff did not attend Tuesday’s board meeting, but instead sent his Chief of Staff, Dennis Kneer.

(Kneer replaced Sheriff Villanueva’s previous Chief of Staff, Lawrence Del Mese, who was transferred elsewhere in the department a few months ago after the sheriff reportedly became disenchanted with him.)

Kneer told the board that Sheriff Villanueva “does have some concerns” about subpoena power,  “specifically as it pertains to employee rights.”  What does it mean, he asked the board,  “when there is a subpoena, for example, of medical records regarding an employee or regarding an applicant?  Are we abiding by the law?  And so that’s why the sheriff’s very concerned. was concerned about the privacy of employees.”  As a consequence, Villanueva would like to run the whole thing by an outside counsel, said Kneer.

Since Ridley-Thomas was the motion’s author, he  answered Kneer by quoting from the motion, which “says explicitly,” he said,  that any and all uses of subpoenas would be done “in compliance with all laws and confidentiality protections.”

County Counsel Mary Wickham confirmed what the supervisor had read, but in far greater detail.

With those points made, he seemed to be finished.

Brian Williams, the Executive Director of the COC,  who is also a former prosecutor, a former deputy mayor of Los Angeles, and lots more, was one of the last county officials to speak to the board on the matter.

“I spent fourteen years as a prosecutor here in LA,” Williams said. And every time I went to court, I would say, ‘Brian Williams on behalf of the people.’

“Well it’s still Brian Williams and Patti Giggins and Max Huntsman on behalf of the community.”

Having a subpoena power, “does not mean always using it,” said Williams.

The LAPD’s Inspector General’s Office, both he and Huntsman pointed out, almost never uses their subpoena power.

“But having the threat of the tool…” he said, ” is usually enough to do the trick.  We have to have that tool.”

The report-back from Tuesday’s motion, due in 30 days, will also include the impact this directive for subpoena power will have on a March 2020 ballot measure, which also aims to give the COC subpoena power.