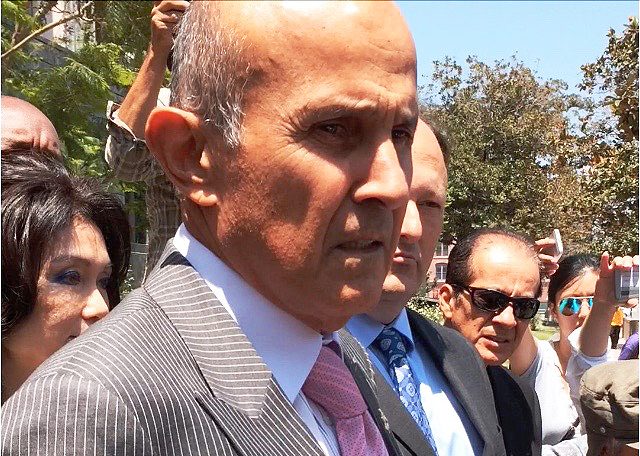 In a string of motions filed early this week, Nathan Hochman, the attorney for former Los Angeles County Sheriff Lee Baca, claimed that lead government prosecutor Brandon Fox plus U.S. District Judge Percy Anderson should both be recused from Baca’s upcoming trial that is scheduled to begin on December 6 of this year.

In addition Hochman has argued that Baca’s trial must be moved to another part of the state of California. Due to the “constant, inflammatory, and far-reaching media coverage surrounding this matter,” Baca’s legal team writes, “a trial within the Central District of California, particularly within Los Angeles County, will violate Mr. Baca’s due process rights.”

The defense went on to say that, if legal proceedings remain in Los Angeles, the former sheriff could not get a fair trial, due to “a tsunami of highly prejudicial media coverage of the case.” Thus, attorney Hochman would like proceedings to be transferred to, say, Sacramento, or Fresno, or San Diego.   And failing that, they would settle for Riverside or Orange counties.

The former sheriff’s attorneys—present and past-–hinted when Baca’s plea deal was falling apart that they might make a push to remove Judge Percy Anderson from the case if Baca ended up going to trial. Now that Baca’s trial date is set, he and his attorney, Nathan Hochman, are making a forceful pitch for Anderson’s removal.

Hochman’s argument for recusing Anderson centers around statements that the judge made when he rejected Baca’s plea deal, which the defense argues makes clear ”that the Court predetermined that Mr. Baca is guilty of conspiracy and obstruction of justice,” even though, at the time, the former sheriff had yet to be indicted on those charges.

Anderson arguably had reason, at the time, to knowledgably make such statements since he was the judge who presided over the trial of the six former department members who were previously convicted of obstruction of justice for allegedly getting in the way of the FBI’s investigation into abuse and corruption in the jails, plus the two different trials of former LASD deputy James Sexton, who was convicted of the same charges. Perhaps, most significantly, Anderson presided over the trial of Paul Tanaka, where the part that Lee Baca did or did not play in allegedly trying to derail a federal investigation repeatedly came up in testimony.

Now the defense points to statements such as this one below, which Anderson made at one of this summer’s sentencing hearings, as the reason why he should not preside over the trial of the man who ran the Los Angeles Sheriff’s Department, when those previously convicted of obstruction engaged in the actions, and followed the orders, that led to their convictions.

Anderson: It’s one thing to lie to an AUSA; it’s another thing entirely, as the evidence has shown, where the chief law enforcement officer of the County of Los Angeles is involved in a wide-ranging conspiracy to cover up abuse and corruption occurring in the Men’s Central Jail.

Hochman and company contend that there is no reasonable way Anderson can remain. “Even if the Court were to offer that it could put these predeterminations aside, the standard for recusal is whether the Court’s appearance of impartiality may be reasonably questioned, not whether the Court is actually biased against Mr. Baca. “

The defense also considered it problematic that Anderson was a member of the Christopher Commission, the independent commission that investigated misconduct in the Los Angeles Police Department leading up to the Rodney King beating.

“Some general determinations of the Christopher Commission include,” wrote Hochman, “[t]he failure to control [certain] officers is a management issue that is at the heart of the problem…”

THE LEAD PROSECUTOR AS WITNESS

The lengthiest motion—56-pages—was reserved for Baca and company’s legal pitch to have the government’s lead prosecutor, Brandon Fox, removed from the prosecution’s team because the defense says it plans to call Fox as an important witness.

Attorney Hochman’s argument about what he describes as Fox’s importance on the witness stand centers around the interview with Baca by the feds that took place on April 12, 2013, during which the former sheriff allegedly lied to two federal prosecutors, one of them Fox, along two FBI agents, about his knowledge and participation in departmental actions in the late summer of 2011 that would ultimate form the basis for all the obstruction of justice cases against members of the sheriff’s department.

In addition to being charged with obstruction of justice, and conspiracy to obstruct justice, Baca is charged with four counts of lying to federal officials, based on what he said in that interview in the spring of 2013.

Hochman contends that, as the main questioner of Baca, Fox can testify uniquely about the former sheriff’s physical and mental state as he answered questions during the four and a half hour interview, “since part of Mr. Baca’s defense….will rely on the impairment of his memory as a result of his Alzheimer’s disease, to remember in April 2013 what occurred twenty months before in August and September 2011.”

(One might wonder why a four-time elected sheriff who headed up the nation’s largest sheriff’s department for a decade and a half should need to be warned that lying to federal officials was against the law, whether under oath or not, but that’s a matter that will no doubt be taken up at the December trial.)

Since Fox was the lead prosecutor on all the obstruction of justice cases against former members of the sheriff’s department, along with several of the cases involving alleged brutality by former sheriff’s deputies, one presumes the prosecution team would be very loathe to lose him.

“All Mr. Baca wants is a fair trial that has a fair judge, a fair prosecutor and a fair jury,” Hochman told Matt Reynolds of the Courthouse News Service on Tuesday. “If he receives that fair trial he believes that he will prevail.”

Two of these matters will be taken up in a hearing in the courtroom of Judge Percy Anderson on October 31, Halloween.

The recusal of Anderson has been referred to another federal judge, Michael W. Fitzgerald

MEANWHILE, ON WEDNESDAY JUDGE ANDERSON RULES THAT PAUL TANAKA MUST REPORT TO PRISON WHILE HE WAITS FOR HIS APPEAL

At a Wednesday hearing, Judge Percy Anderson ruled that Paul Tanaka cannot remain out of prison while he waits to for the 9th Circuit Court of Appeals to rule his appeal.

However, the next step is for Tanaka and his lawyers to appeal Anderson’s decision to the 9th, which will keep Tanaka from having to report to a federal lock-up.

Joel Rubin at the Los Angeles Times has more on the ruling, and the appeal to come.