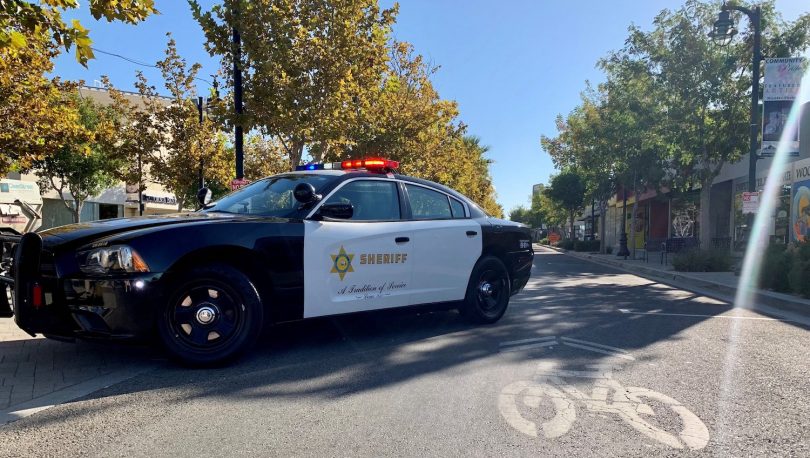 In Lancaster, a desert city in the northern part of Los Angeles County, local officials have come up with an unconstitutional “scheme” to punish unhoused people and other low-income residents with $500 and $1,000 fines for violating the city’s municipal code, according to a new lawsuit filed by the ACLU of Southern California and UC Irvine School of Law.

At a city council meeting on Tuesday, February 9, Lancaster Mayor R. Rex Parris criticized the legal challenge as one of the ACLU’s “latest endeavors to subvert the criminal justice system,” while also emphasizing that the city’s motivation for the citation system was “to keep [people who commit misdemeanor crimes] from getting criminal records, so that they could get jobs, so that they didn’t have to carry the weight” of a conviction.

Lancaster officials enacted the administrative fine system in 2018, to, as they put it, “counteract” the 2014 passage of Proposition 47, which reduced six low-level drug and property-related offenses to misdemeanors.

“The Sheriff’s Department is helpless under Proposition 47,” Vice Mayor Marvin Crist said when the ordinance to implement the citation program was introduced. “We want to put some teeth into it.” Prop. 47, the city council said, “emboldened some persons to repeatedly commit” the offenses now carrying lesser punishments.

“The Ordinance,” the legal complaint says, “expressed the City’s intent to implement an administrative program more punitive than the criminal court system, and authorized law enforcement to issue administrative citations imposing fines of $500 to $1000 for the state offenses Proposition 47 reclassified.” But it has also been used to punish the city’s unhoused and low-income residents for so-called “quality of life” infractions, according to the lawsuit.

“We do know that 60% of the homeless have criminal backgrounds,” Lancaster Mayor R. Rex Parris said in an interview with the Antelope Valley Press. “They’re criminals and thugs.” And when ABC7 asked what should happen in the hypothetical situation of a homeless individual robbing another person, Parris said that “somebody ought to shoot him.”

Actions such as sleeping, or even sitting outside “without a reason,” are subject to the Lancaster fines, which are enforced by the Los Angeles County Sheriff’s Department. These “offenses,” as well as actions like not leaving an encampment that city officials want to clear, are often cited — improperly — as “disturbing the peace,” according to the ACLU. The first offense carries a $500 fine, while subsequent citations are $1,000.

Data shows that this system is enforced disproportionately against Black people and individuals experiencing homelessness.

“Since 2018, forty percent of the people that LASD reportedly stopped to enforce Lancaster’s municipal code were Black, and more than half were reported to be homeless,” according to the complaint, which cites data the sheriff’s department collects and reports to the California Department of Justice as part of the Racial and Identity Profiling Act.

Additionally, nearly half of the larger pool of overall infraction citations the LASD writes in Lancaster are issued to Black people. Nearly a quarter are issued to people who are living unhoused.

And there’s been no way to contest a citation without paying it in full, as plaintiff Leroy Butts found.

Butts, a 68-year-old black man, was cited while handing out informational flyers in the park.

Butts has lived in Lancaster for 6 years. Some of those years, he spent unhoused. Butts secured housing in October 2019, and currently lives in an affordable housing unit.

On the afternoon of August 22, 2019, while he was still experiencing homelessness, Butts was handing out “Know Your Rights” pamphlets to other unhoused people in Lancaster’s “American Heroes Park.” Butts was drinking a grape soda.

When Butts saw LASD officers approaching a group of unhoused people, he walked up, still holding the soda, to inform them of their legal right to remain in the park, despite what the deputies might tell them.

According to the lawsuit, Deputy Andrew Lizarde called Butts a “smartass,” then pointed to an empty beer can on the ground and told Butts he was going to be cited for drinking in public. Butts showed Lizarde the soda in his hand. “Lizarde ignored him,” the complaint states. The officers present then detained and cited Butts for violating Lancaster Municipal Code 9.20.030, which bans “consuming alcoholic beverages on public streets or parking lots.”

“You know this is a five hundred dollar ticket,” Lizarde allegedly said to Butts with a smirk.

Lizarde then ordered Butts to leave the park, according to the complaint.

Butts tried to appeal the citation, but found that the city only allowed individuals to appeal if they had paid the full amount owed on the citation, which, for Butts, was more than half of what he received monthly from Supplemental Security Income.

Not only does the city employ a “‘pay-to-appeal’ scheme,” the lawsuit says, but there is no process for determining whether a person issued a citation has the ability to pay it.

Butts didn’t give up. He sent a letter to the city asking that the payment be waived so that he could initiate an appeal, and requesting that he be provided with a hearing to determine whether the citation was proper.

Thirty-one days after Lizarde cited Butts, the city sent Butts a notice that his citation payment was overdue by one day. The letter from the assistant city attorney said the city would take actions to collect the debt, including by blocking the DMV from renewing his license and filing a claim against his income tax refund.

The city also sent the debt to a private debt collection company, Innovative Collection Services, which tacked on an additional $150 collection fee to what Butts owed.

“On information and belief, Turbo Data System’s revenue collection services resulted in collection of only $36,695 in revenue,” states the lawsuit, “just over half of the contract cost.” And that recouped cash was reabsorbed into the city’s general fund.

“If the city really cared about public safety solutions, it would put the resources wasted on tickets and collections toward helping people meet their needs,” said ACLU attorney Tiffany Bailey.

Instead, according to the lawsuit, the city and the sheriff’s department continue to criminalize poverty, violating Butts and other Lancaster residents’ due process and equal protection rights.

“As Mr. Butts experienced, the city’s administrative citation scheme violates the due process and equal protection guarantees of the California Constitution and exposes Lancaster residents like him to unchecked abuse, harassment, and retaliation by the city’s police force, LASD,” the complaint states.

The lawsuit seeks the immediate cessation of the citation program and the collection of debts incurred through the program. The petitioners also request that the city and LASD be blocked from spending money on issuing these citations and collecting related debts.

During the February 9 Lancaster City Council meeting, the mayor and council voted to make amendments to the system through a new ordinance. But the changes do not address many of the problems that warranted the lawsuit, the ACLU says.

The ordinance — according to the city’s leaders, who paint the system as a beneficial “diversion” program — would “expand on the existing administrative citation program to include all misdemeanor offenses,” a change that will “benefit public health, safety and welfare, while providing persons who commit such offenses an opportunity to avoid criminal proceedings and possible convictions.”

The new ordinance, city leaders said, would ensure that cited individuals would have the opportunity to do community service instead of paying the fine. The changes would allow an initial review to determine whether there are extenuating circumstances in the case that “warrant dismissal,” but would still require full payment of the fine for an actual appeal.

During the city council meeting, several residents called in to urge the council to dismantle the administrative fine program, calling it a waste of taxpayer dollars that disproportionately harms some of the city’s most vulnerable residents.

One caller, Javier Flores of the Antelope Valley League of United Latin American Citizens, said the city council should be “investing in people and community resources,” rather than spending taxpayer money on “counterproductive, complicated and expensive systems of punishment like this one.”

Another commenter, Cynthia Carter, told the council that for her clients with developmental disabilities who scrape by on a fixed income of around $940 a month, a $500 fine would be “devastating,” especially during the pandemic.

The ordinance, Carter said, is a “malicious financial war on poverty — on poor people” that is “so reminiscent of Jim Crow laws [against] vagrancy and loitering” meant to keep Black people “in servitude, financial and otherwise.”

ACLU attorney Bailey put it another way. The citations are part of a “bigger systemic issue in Lancaster.” The city, Bailey said, employs the LASD to “harass and target people to make it so untenable to be in the city limits — to basically banish them” deeper into the desert.

There, on the outskirts, “the weather’s even hotter, they have no access to food, resources,” Bailey said. “We’ve heard countless stories” of people “who have almost lost their lives because they were banished to these areas.”

The closest water to this part of the desert is at the AV Fairgrounds, four and a half miles away — a long trek without transportation, Ron Kagan, the outreach director for the Antelope Valley chapter of the ACLU told the city council Tuesday night.

Mayor Parris called the comments and testimony from his constituents during the public hearing portion of the city council meeting “dishonest.”

“Sorry folks, I’m not persuaded,” he said. “I’m actually disgusted that this is the approach you’re taking.”

Lancaster, the mayor said, “is not going to be a city where people can commit crimes without any accountability at all.” Furthermore, the council’s citation system is not “an attack on the homeless,” he said.

Out of 105 citations, according Parris, just three were issued to people reported to be homeless.

It’s not clear where the mayor’s statistics are coming from, and his office has not yet responded to WLA’s request for clarification.

“Records we have reviewed,” ACLU Attorney Adrienna Wong told WitnessLA, “show far more citations were issued to people for allegations directly related to their homelessness (loitering, public camping, presence at a homeless sweep), and that doesn’t even include citations that may have been issued to unhoused people based on other kinds of allegations.”

The numbers Parris cited have “no basis in fact as far as I am aware,” she said.

On Feb. 10, 2021, we updated this story to include quotes and information from the Lancaster City Council meeting on February 9, 2021.