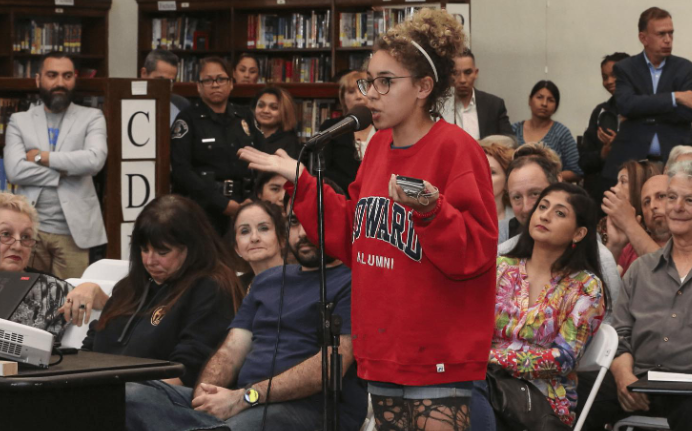 In 2011, the Los Angeles Unified School District established a policy requiring schools to subject students at its 200 middle and high schools to daily “random searches.” School administrators pull kids out of class, search them with a handheld metal detector wand, and go through their bags and belongings looking for “contraband.”

Since the searches began, the district has ignored calls from parents, students, community groups, and others to end the practice, which according to data UCLA Civil Rights Project researchers collected, is not actually all that “random.”

Released earlier this summer, the report found that school staff used the searches to punish and humiliate certain students for unwanted behavior. Parents, kids, and teachers also report that specific student groups, including students of color and low-income kids, are disproportionately selected for searches.

The practice rarely results in the confiscation of actual weapons.

Between the two school years studied, 2013-2014 and 2014-2015, school administrators found no guns during the random searches. Less than one percent of searches–86 out of 105,366–turned up any weapons (none were guns). And those 86 seizures accounted for 6 percent of all weapons found on campuses, the majority of which were found by other means, according to the report. School supplies like whiteout, markers, and highlighters accounted for 61 percent of confiscated items, and things like personal hygiene items, over-the-counter pain medication, asthma inhalers, and cough drops accounted for another 10 percent of items seized from kids.

Additionally, researchers found that the policy costs the district an estimated $1.12 million in staffing costs, and students approximately 39,000 instructional hours each year.

Kids reported that the searches made them feel like criminals, as well as disempowered and unsafe.

“Twice, school administrators or school police searched my backpack, passed the metal detector wand over my bag, and then I was sniffed by dogs,” one former LAUSD student said. “Most of the times I was searched, I had to take off my shoes, socks, and sweaters and then get wanded. Sometimes, I was even wanded by men. If I or other girls had our hair in a ponytail or wrapped in a bun, we had to take our hair
down and let the administrators run their fingers through our hair, even if the wand didn’t go off. These experiences made me feel unsafe in school.“

LAUSD stands alone in its use of the program. According to the report, no other large school district in the nation has a policy “that even remotely resembles LAUSD’s.”

Earlier this month, a Blue Ribbon Panel on School Safety convened by LA City Attorney Mike Feuer issued its final report and recommendations for improving student safety at LA Unified schools. The panel recommended that the school district immediately suspend the practice until the program could be audited. One panelist argued that the program should be dumped “permanently…without any further evaluation.”

The panel also recommended the district work to place a full-time mental health practitioner at every school and conduct “age-appropriate” active-shooter training.

Refusing to change its practices, the LAUSD has instead launched a controversial pilot program in 14 schools. Through the program, 10 days out of the month (instead of every day, as under the current policy), school officials will pull kids out of class and search them for contraband.

Reducing the practice from every day to 10 days every month “does not go far enough,” however, according to the school safety commission. “LAUSD’s random metal detector search policy seriously risks eroding student trust — and thus their willingness to report real threats to adults — at schools throughout the District,” the panel wrote. “Yet, no comprehensive evidence justifies this risk; rather, LAUSD’s internal audits have shown the policy to be largely ineffective at recovering weapons.”

Last week, LAUSD leaders participated in a listening session with #StudentsNotSuspects, an advocacy group that’s working to end the district’s invasive random searches. The coalition called on school leaders to implement the Blue Ribbon Panel’s recommendation to suspend the program. The school district, however, said that it was still considering the report and recommendations.