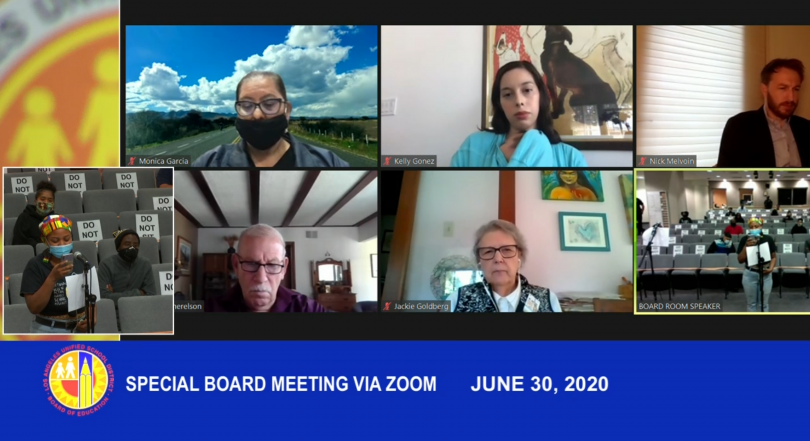 The largest independent school police department in the United States will see its funding drop by $25 million — 35 percent of the total — thanks to a 4-3 vote from the Los Angeles Unified School Board on Tuesday in response to a massive, weeks-long turnout of community members calling for defunding. (This included more than five hours of public comment before the board’s vote on the measure.)

The LASPD budget has grown 48 percent during “15 years of damaging and unaccountable growth,” as both crime and enrollment numbers have dropped, according to Alex Caputo-Pearl, the president of the United Teachers of Los Angeles (UTLA) union, told the board. The teachers union called for a 50 percent cut of $35 million. “A budget is a moral document,” Caputo-Pearl said. “It shows our values.”

The board had previously considered and declined a proposal to make deeper cuts to the LA School Police Department.

William Etue, Vice President of the LA School Police Department, noted that the LASPD’s $70 million was just .8 percent of the total LAUSD budget. “That shows where we value public safety and the safety of our students,” he said. “The number one duty of law enforcement is the preservation of life … that is our moral, ethical, legal obligation to the students and staff we serve.” Since the department’s inception in 1948, Etue said, there have been no in-custody deaths, and members of the department have saved 52 lives since 2005.

While many current and former students, teachers, and parents urged the board to divest from police on campus to protect students, other parents and members of the LASPD said that police on campus were critical to the safety of students.

“The goal of the LASPD team,” according to the LASPD page on the school district’s website, “is to address the quality of life issues that impact student safety and the ability of the students and staff to enjoy a safe learning environment free from the fear of crime.”

Yet, according to a 2018 report called “Get Out: Black Male Suspensions in California Public Schools,” from UCLA’s Million Dollar Hoods Project and San Diego State University professors, the reality of the LASPD is not quite so conducive to a healthy learning environment for all students.

The report shined a spotlight on the alarming state of policing in LA’s schools. Between 2014 and 2017, the LASPD made 3,389 arrests of students, issued 2,724 citations, and participated in 1,282 diversions. Kids in middle and elementary school accounted for one in four of the total LASPD arrests.

Together, boys of color made up 76 percent of all LASPD involvement, during this time.

Not even 24 hours after Tuesday’s school board vote, LASPD Chief Todd Chamberlain announced his resignation. (Deputy Chief Leslie Ramirez will take his position temporarily.) Chamberlain is not the first member of law enforcement to choose to quit rather than accept change, nor will he likely be the last.

Tuesday’s move will require the department to lay off 65 officers (out of a little over 470).

Isaac Bryan, Director of Public Policy at UCLA’s Ralph J. Bunche Center for African American Studies, and one of the leads on the Million Dollar Hoods Project, praised the board’s defunding action and the community members who fought for change.

“This is huge. This is important. This is the work of organized young people,” Bryan said on Twitter.

That $25 million cut will be used to boost for mental health, counseling, and nurses for LA’s students, as well as to empower a task force to study ways in which to achieve school safety without a large police presence. Until that task force comes back, officers will be out of uniform and removed from campus.

Before he quit, former Chief Chamberlain cautioned that the reduction to the LASPD budget would mean the agency’s intervention and prevention (rather than enforcement) efforts would be eliminated.

This is where the task force would come in and explore alternatives to using police as intervention workers.

Additionally, having dedicated school police departments does not appear to deter — or protect children from — mass school shootings. Approximately 85 percent of mass shootings at schools happen on campuses with dedicated armed officers.

“School districts have shown a near obsession with “hardening” schools despite federal data revealing that the real crisis of schools isn’t violence, but a broad failure to hire enough support staff to serve students’ mental health needs,” the ACLU wrote when it released a national report on the issue in March of last year.

A decade and a half of increasingly harsh school discipline resulted in a long list of negative collateral effects such as reducing instructional time, bringing students unnecessarily into contact with the justice system, and increased dropout rates as repeated suspensions, expulsions, and campus arrests caused whole groups of school children to fall further and further behind in their schoolwork until they simply left school altogether.

While there has been a movement in California and across the nation to reduce suspensions, expulsions, and school arrests for normal kid behavior and low-level infractions, there is still much work to be done to address the harm done, especially to Black children and other students of color.

“We know that it does traumatize students, especially black students, to see police on campus,” UTLA union President Caputo-Pearl said.

Marshe Doss, a graduate of Dorsey High School, said that her sister Aliyah had been followed, harassed, thrown to the ground, and pepper sprayed, and handcuffed by school police. Aaliyah, Doss said, is 12 years old. “I have been coming here and speaking to you all for a long time – speaking about the harmful effects that random searches have on Black students, speaking to you about how having police officers on campus does not send a message of safety, but the message of fear … speaking to you about how pepper spray isn’t allowed in juvenile detention centers, but allowed in schools of unarmed Black students.”

“I have been searched and interrogated by school police,” Steven Ortega, a former LAUSD student and community organizer told the school board. “Right away I was fearing for my own life.” Ortega described having all of his belongings dumped out during the search as an anxiety-inducing violation of his privacy. “I urge you to defund the school police and make our LAUSD schools feel safer,” he said.

Melina Abdullah, one of the founders of the LA chapter of Black Lives Matter, told the board that two of her three children have been “traumatized” by having the police called on them in LAUSD schools as early as second grade.

“Last week, we were all here by the thousands, gathered outside, demanding an end to school police,” Abdullah said. “This is a moment that the world has cracked wide open. You have the opportunity to follow the leads of school districts like Oakland Unified, San Francisco, Seattle, Denver, Minneapolis. Let’s embrace our children, rather than terrorizing and traumatizing them.”

I’m here to ask this board to be courageous today,” the mother and activist said. “If there’s one place police don’t belong, it’s in our schools.”