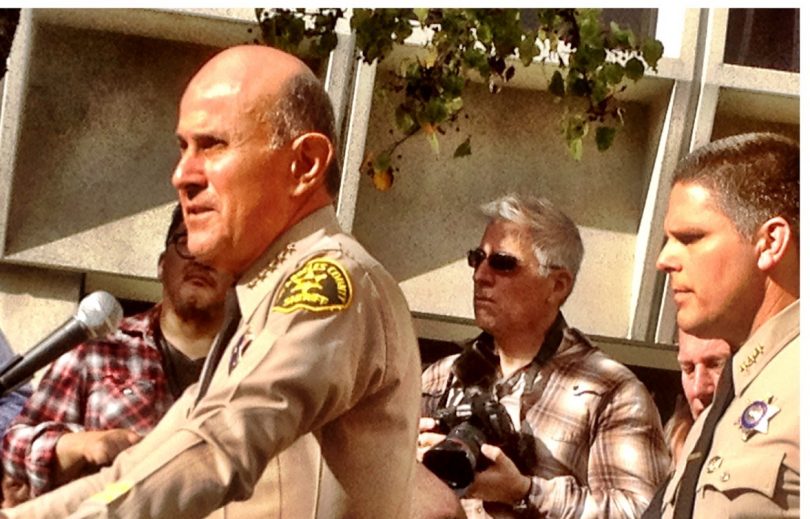 On Friday, former Sheriff Lee Baca was indicted by a federal grand jury for obstruction of justice and conspiracy to obstruct justice. These two new charges are on top of the original charge of lying to federal officials that Baca admitted to back in February, as part of a plea deal hammered out with federal prosecutors.

The new charges were not exactly a surprise.

A six-month sentence, Anderson said, does not “fairly account for the significant harm” caused “by this defendant” and “under-appreciates this defendant’s culpability.” The guidelines agreed upon, the judge continued, “fail to fairly measure the culpability of this defendant….and the nature and circumstances of criminal conduct.”

Once Anderson dynamited the plea deal on July 19, at the next sentencing hearing on August 1, Baca and his attorneys had three possible ways to move forward:

Number 1: Baca could continue to plead guilty to the single charge with the understanding that the judge was going to hand down whatever sentence he saw fit, which could be as much as five years.

Number 2: Baca and his attorneys could work with the prosecutors to come up with a new deal that might please Anderson, which turned out to be nearly impossible.

Number 3: Baca could withdraw from the plea deal altogether, meaning that the only option left was to go to trial. This last option all but guaranteed additional charges, since the government had maintained in the negotiations for the plea that it could hit the sheriff with more counts, hence the motivation to plead to the single charge of lying to the feds.

On August 1, Baca went with Door Number 3, the go-to-trial option.

If Baca is convicted on the two obstruction counts, plus original count of lying to the feds, he could face as much as 20 years in a federal prison.

But that kind of lengthy a term is considered unlikely, especially since Baca’s second in command, Paul Tanaka, received a sentenced of five years—although he was, in the eyes of many, the person responsible for the day-to-day control of the operation that has thus far resulted in seven obstruction of justice convictions, on top of his own, with the sentencing of a ninth, former LASD Captain Tom Carey—who took a plea deal—still to come.

Yet, however one spins things, when it comes to the actions that have resulted in a string of convictions of LA Sheriff’s Department members in the last two years, some for obstruction of justice, others for corruption and brutality, all of that criminal misconduct—and far more, frankly—was allowed to occur on Lee Baca’s watch, which seemed to be much of Judge Anderson’s point.

The former sheriff’s defense is expected to make Baca’s diagnosis of Alzheimer’s disease a significant issue in the trial. His attorneys, Michael Zweiback and a new member of the team, Nathan Hochman, have already suggested that, in the summer of 2011—the period when the actions took place that make up the heart of the obstruction charges—the former sheriff “delegated more than he should have,” due to his condition. In other words, some kind of claim of diminished capacity may be in the offing.

On the government’s side, Assistant U.S. Attorneys Brandon Fox, Lizabeth Rhodes and Eddie Jauregui, wrote that Baca was “well aware of the accusations of rampant abuse,” in the jails, particularly in Men’s Central Jail and Twin Towers Correctional Facility. There were the ever-worsening ACLU reports. Then there were things like the “allegations about LASD deputies who worked on the 300 floor of MCJ” and called themselves “the 3000 boys,” who “exhibited gang-like and violent behavior, who “used excessive force on inmates, “and “falsified reports to cover up wrongdoing.”

In the indictment, the prosecutors also hinted that they have witnesses waiting in the wings who will testify that they told Baca about brutality in the jails, and that he still made no effort to curb the problem.

As for the actual obstruction charges, the 15-page indictment of Baca is not as long or detailed as the 20 pages written by federal prosecutors in their final indictment of Paul Tanaka. For example, there are no dramatic moments when a witness describes the defendant shouting “Fuck the FBI!” as was the case in Tanaka’s indictment.

Yet, there is the mention of Baca approving an expensive bunch of overtime so that a rotating team of deputies could guard federal informant Anthony Brown round the clock, after he’d had his name changed and was moved to an out-of-the-way sheriff’s station in San Dimas, allegedly in order to allegedly keep him away from his FBI handlers. There are accounts of a meeting where Baca was reportedly present for discussions of approaching FBI agent Leah Marx and threatening her in order to obtain information. And there is the letter from Baca to then US Attorney Andre Birotte, threatening to “end the LASD’s participation in federal task forces” if Birotte didn’t yank his support for the FBI’s investigation of the jails—and so on.

According to Baca’s attorneys, however, when it comes to the obstruction charges, the feds have themselves admitted that their case against the former sheriff is not particularly strong.

They point to passages in the prosecution’s sentencing memo, which was designed to persuade Judge Anderson that a six-month sentence for Baca was appropriate:

On the other hand, when the plea deal was first announced back in February, the government indicated that, if Baca changed his mind and the deal fell apart, they were willing and able to go to trial.

According to the feds, they laid the going-to-trial-with-additional-charges gun on the table when bargaining with Baca’s attorneys to achieve the plea. And they were fully prepared to fire that metaphorical pistol, if it became necessary.

In a text to WitnessLA, Hochman said that the new obstruction charges “represent punishment” by the feds for their client’s decision to go to trial. He also reiterated the defense’s point that the prosecutors had “admitted in court the weakness of its obstruction case” against Baca.

“This trial will be vastly different than the others,” Hochman wrote.

Well, one thing is certain: the upcoming trial of the man who led the Los Angeles Sheriff’s Department for fifteen years presents an opportunity like no other to shine a light on what went so catastrophically wrong in the LASD, and what still needs to be done to fix it.

The trial of Lee Baca is, at present, scheduled for September of this year.

Here’s the text of the Baca indictment

THE NEXT CHAPTER IN THE BACA SAGA & THE NEED FOR REFORM

Rhetoric aside, whether Baca or the federal prosecutors do or do not actually want to go to trial, it has come to pass that, barring something wildly unforeseen, the former sheriff will in fact be on trial after all—even though for several years, the likelihood of such an event occurring appeared all but impossible.

Given the disturbing display of departmental arrogance and wrongdoing that the previous LASD trials have have illuminated, it seems fitting that the guy at the top should also get his chance to face a jury—whatever the outcome.

After all, the whole obstruction of justice mess came about because the feds were covertly investigating accounts of brutal and corrupt behavior by deputies toward jail inmates (and, it seems, their visitors) that department higher-ups had aggressively refused to address, no matter how many awful reports of abuse were brought to their attention.

Unfortunately, based on our own investigations over the last six years, along with those of the LA Times, ABC7, the Citizens Commission on Jail Violence, and others, the problems forced into public view by a raft of federal indictments are indicative of a larger toxicity that was allowed to spread unchecked in the department, both in the jails and elsewhere in the LASD.

Yet, despite what has been brought to light by two years of federal trials, and the many positive steps taken by Sheriff Jim McDonnell, the path to lasting reform still seems to be littered with obstacles.

It was heartening to note that, in Sunday’s Los Angeles Times, the editorial board wrote about the fact that, while it’s a good thing that Baca will be on trial, the need for departmental reform is bigger, wider, deeper than the various prosecutions can reasonably accomplish.

Here are some clips from their essay:

Consider, for example, McDonnell’s continuing attempts to weed out of the department those deputies who have shown themselves to be unsuited to carry weapons and to wear the badge and the tan and green uniform.

Under the Los Angeles County system, fired deputies can be, and indeed have been, reinstated by a civil service commission that has no expertise in law enforcement or public safety and that makes its decisions based in part on the precedent set by previous sheriffs and commissions. So as McDonnell is attempting to raise standards of performance, the commission is judging deputies based on previous, lower standards. McDonnell then is compelled to take back — and to keep paying — deputies he and his command staff have deemed unfit for their jobs, completely undermining his power to set high standards of performance. It is an untenable system that has nevertheless become the envy of law enforcement officers in other agencies who would like to enjoy similar leniency…..

….The county Board of Supervisors voted this year to establish an oversight commission to keep tabs on sheriff reforms, but the panel has yet to be appointed or to convene. The board agreed to consider asking voters to grant that commission subpoena power, but with deadlines approaching to put measures on the Nov. 8 ballot, there has been no move forward on that issue….

….Switching out the man at the top was a solid step but it will not be enough to correct the Sheriff’s Department, and Los Angeles cannot rely on criminal prosecution of sheriffs, command staff and deputies as a substitute for oversight. Baca’s failed plea deal and his looming trial may be among the more compelling chapters in the story of the Sheriff’s Department, but the most important pages are those that lay out how we make sure that a similar meltdown does not occur again — and those pages haven’t yet been written.