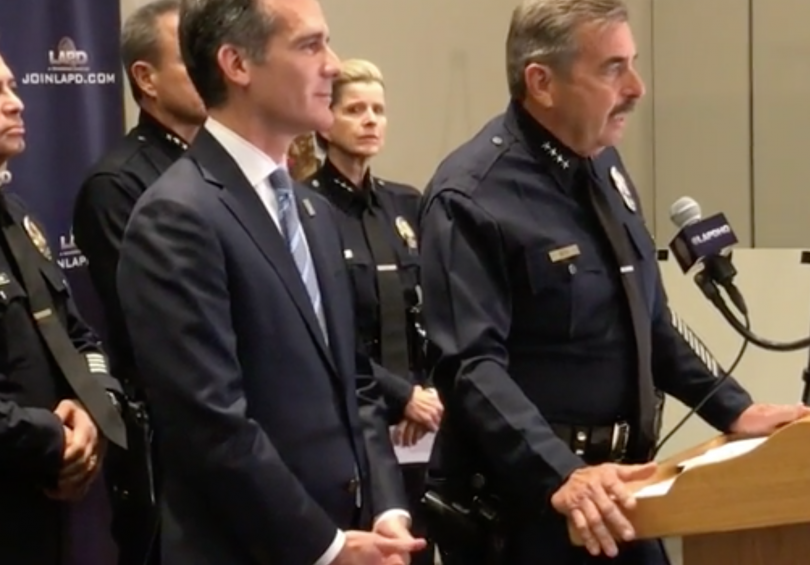 A total of 31 men and women have thrown their metaphorical hats into the ring in the hope of succeeding Chief Charlie Beck as the head of the Los Angeles Police Department.

The LA Times’ Kate Mather and Cindy Chang broke the news Tuesday morning, after talking with Police Commission president Steve Soboroff, who confirmed the number of people who applied for the position before the end of the Friday deadline, after a three week window in which applications were accepted following a national search.

While no names have officially come forward, the Times learned from Assistant Chief Beatrice Girmala, that she did not apply. The respected and well-liked Girmala oversees the department’s Office of Special Operations, which includes the Counter-Terrorism Special Operations Bureau and the Detective Bureau, which in turn include such specialized divisions as Metro, Air Support Division, Major Crimes, Robbery-Homicide Division, Juvenile, Forensic Science, Gang and Narcotics and more.

She was thought to be one of a number of possible front-runners.

Other well-regarded names of possible applicants have included First Assistant Chief Michel Moore, a 35-year veteran of the department who is head of Operations and second in command under Beck, and was a finalist for the position of Dallas police chief last year. Also on the same list of high-profile possibles is former Assistant Chief Sandy Jo MacArthur, who retired in 2015 after 35 years at the LAPD, and now works with the Los Angeles District Attorney’s Office as the mental health training coordinator for county law enforcement.

WLA was able to confirm that Moore and MacArthur have indeed applied.

In addition, the LA Times confirmed that Robert Arcos, the deputy chief who heads up the LAPD’s Central Bureau, and Deputy Chief Phil Tingirides, who leads the department’s South Bureau, are also on the list of applicants. Both are highly thought of as well.

And there are other department insiders, or former insiders, whose names have been mentioned as possible contenders. Some handicappers are pushing for a woman or Latino chief since either would be a first for the city.

The method for choosing the chief is laid out in general terms by the city’s charter. If we use the past as a guide, the 31 applicants will eventually be narrowed down to a longlist of 12 or so.

Steve Soboroff and the commission’s vice president Matt Johnson will do the narrowing of the list given them by the Personnel department.

The five-person Police Commission will then interview everyone on the smaller list, and winnow that list down to three finalists.

Those final three names will be given to Mayor Eric Garcetti in order of preference. Garcetti will select the next chief of the Los Angeles Police Department.

The City Council must then ratify the mayor’s choice.

Chief Charlie Beck made the surprise announcement that he was retiring at an otherwise routine press conference on January 19. Beck will officially step down on June 27, which is his 65 birthday. The chief made a point of announcing his departure well in advance, thus giving the city plenty of time to search for and choose a worthy successor.

To prepare for a rigorous search for candidates, the Los Angeles Police Commission held a series of six town hall-like forums around the city to get feedback from community members about what they believed the city needs in the next chief. A national policing nonprofit, the Police Executive Research Forum, assisted with the process by looking for and alerting worthy prospects elsewhere in the U.S.

In 2009, the three finalists were Jim McDonnell, who is now, of course, the Los Angeles County Sheriff, Mike Moore, who is an applicant now, and Charlie Beck, whom then-mayor Antonio Villaraigosa selected.