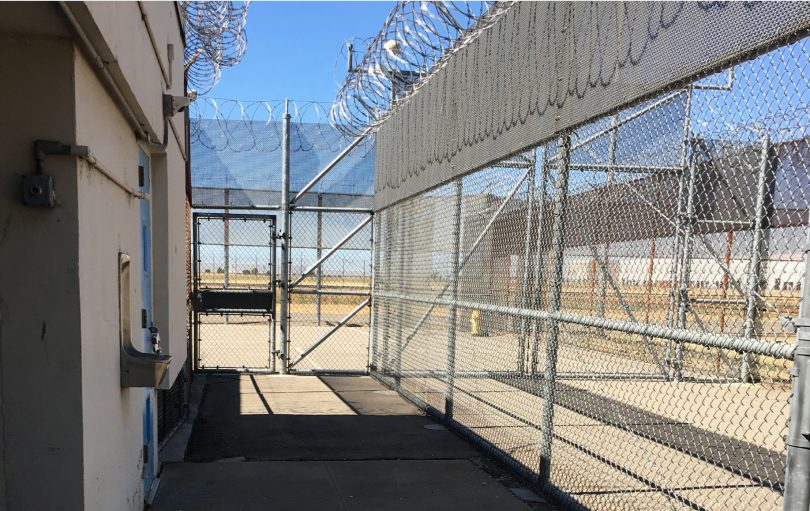 Fenced area outside a Chad living unit, courtesy of the Center on Juvenile and Criminal Justice

On May 14, Governor Gavin Newsom announced a plan to close the state’s youth correctional system, the Division of Juvenile Justice (DJJ) — prison for kids.

This unexpected announcement, which was a part of the May revision of the Governor’s budget released last Thursday, proposes to stop taking any more youth into the DJJ system starting January 1, 2021—diverting them instead back to their individual counties.

Then, as young people gradually transition out to their new lives, with no new residents coming in, the governor will phase out all three youth prisons altogether, along with the state’s youth fire camp.

As it happens, with COVID-19 worries in mind, the governor has informally begun the phase-out process, at least to some degree when, on March 24 of this year, he signed a temporary order that required county jails and juvenile facilities to keep those who would usually be transferred either to adult or youth lockups run by the California Department of Corrections and Rehabilitation.  The idea was to prevent bringing any new residents into the youth or adult facilities who might introduce the virus.

Since the news broke of the Governor’s new plans of shutting DJJ down completely,  youth advocates along with parents of kids who’ve been in the state system, plus the kids themselves, have cheered the announcement.

They see this, in addition to the Newsom administration’s recent commitment to close two adult prisons in the next three years, as crucial steps towards reimagining a big chunk of California’s justice system.

“As an organizer with the Books Not Bars campaign, I saw first-hand the pain and suffering families went through as their children suffered abuse and violence at the hands of the state,” said Ella Baker Center Executive Director Zach Norris. “I’m very encouraged by the Governor’s action to divest from youth incarceration. The next step is to invest resources in creating more opportunities for young people, including community services, mental health support, job training, and restorative justice practices.”

Those at the Center on Juvenile and Criminal Justice (CJCJ) — which has, for a long time, acted as an unofficial independent monitor for DJJ, inspecting its institutions and repeatedly unveiling dangerous conditions — also strongly supports the Governor’s plan, which echos CJCJ’s own long-standing recommendations.

Why so many youth advocates want DJJ to close its doors.

For those readers who may not have followed the issue closely, you can quickly get an idea of the chronic failings that DJJ seems unable to cure by glancing through the rigorously researched and alarming 104-page report, released by CJCJ co-authors Renee Menart and Maureen Washburn in February 2019.

(WLA reported at length about the report and its significance here.)

Then, as Witness reported last month, a new policy brief released by CJCJ’s Menart and Washburn on April 14, again focused a spotlight on DJJ’s long-standing systemic shortcomings that, according to the brief (and WLA’s own sources) make life dangerous for the young people who wind up in the state’s system, even without the threat of a pandemic.

“DJJ prepared me to get out and fall face first,” is the way a youth recently released from DJJ explained his feelings on the matter. “When I was released, I was very anxious and disconcerted. I did not have any idea how to rebuild my life or my relationships.”

The governor’s move is “long overdue,” said Lourdes Duarte, a parent organizer with Books Not Bars initiative, launched in 2004, by the Ella Baker Center for Human Rights. “Like a lot of parents with incarcerated children, we often felt hopeless, like we were doing time with our children.” The fight isn’t over, she said, “but it feels good to see that other parents won’t have their children locked in these dungeons in the future.”

A move this significant, however, is not simple, as Jessica Nowlan, executive director of Young Women’s Freedom Center, pointed out.

“This commitment by the state towards a different approach to youth justice is a huge step in the right direction for juvenile justice reform in California,” said Nowlan. “Community organizations have been working toward this for years because we know youth in the Division of Juvenile Justice continually face harm, violence, and brutality in detention.”

Nowlan also added that closing the DJJ, and moving youth back to local jurisdictions, “is not in itself the solution…”  Moving the power and oversight back to county jurisdictions, she said, “poses additional obstacles to the safety and wellbeing of our young people.”

In other words,  as welcome as the governor’s announcement was, youth justice experts cautioned that the news about the long-troubled state division closing its doors, while positive in many important ways, is also fraught with complications, which could cause harm to some kids, while helping others.

“Here’s the thing,” said Dr. Jorja Leap, UCLA, anthropologist, adjunct professor, author, and gang & conflict expert. “I’ve been involved as an expert witness in transfer cases, having to do with whether kids are going to be transferred from juvenile court to adult court. And DJJ,” Leap said, “has existed as an alternative for youth who had been involved in very serious crimes, but who are still under the age of eighteen.”

In other words, much of DJJ’s value, according to Leap, was providing an alternative to help youth get on the right pathway that, while far from perfect, was better than shoving them into an adult prison.

Without that concrete alternative, will this mean that more kids will wind up in the adult system?

It hasn’t helped that the Governor’s announcement came with little to no preparation, according to Leap and others WLA spoke with. “With budget cuts looming,” said Dr. Leap, “the pathway was not laid out.”

In Los Angeles County, which has the largest youth justice system in the state, if not the nation, everyone’s already scrambling in order to deal with COVID-19, according to Leap.

“We have a county infrastructure,” including the Board of Supervisors, that is “under siege because of the virus.”

Added to that, in LA County the new probation oversight commission — the POC — is supposed to be forming right now, this minute, which means any kind of oversight is in transition.

It hasn’t helped that the county has yet to post the job listing for the executive director of the POC, Dr. Leap and several others have noted.

So much in LA County’s probation department, is “in suspended animation,” she said,

In addition, the response to the pandemic “has gone from a crisis to something we’re going to be dealing with for a long time.”

And now, Leap said, a new and very sensitive realignment is about to land on us. “And we’re not in the best position to handle it well.”

Yet, ready or not, with the state closing DJJ, an option will vanish. This means, in LA County, we need to figure out how we’re going to replace it –or kids are going to wind up in the adult system.

Last January, CJCJ, and others praised Newsom for announcing his intention to move DJJ away from the California Department of Corrections and Rehabilitation (CDCR) — which has traditionally overseen the state’s youth prisons — with the plan to put the facilities instead under the umbrella of California’s Department of Health and Human Services (DHHS).

But as one of WLA’s columnists pointed out last year, to do so successfully, Newsom would be wise to “initiate a transparent and rigorous diagnosis of the considerable dysfunctions that currently plague DJJ, including the problems with its oversight-free educational system.”

Now, with the newly-announced shutdown of DJJ, perhaps it would be prudent to initiate a similarly conceived “transparent and rigorous diagnosis,” both at state and county levels, to look at, among other things, what collateral effects—some potentially transformative, others worrisome—the closure could bring with it, and what will be needed in California’s counties to make this new move a success story.

In Los Angeles County, specifically, we would be wise to initiate this diagnostic process sooner rather than later.