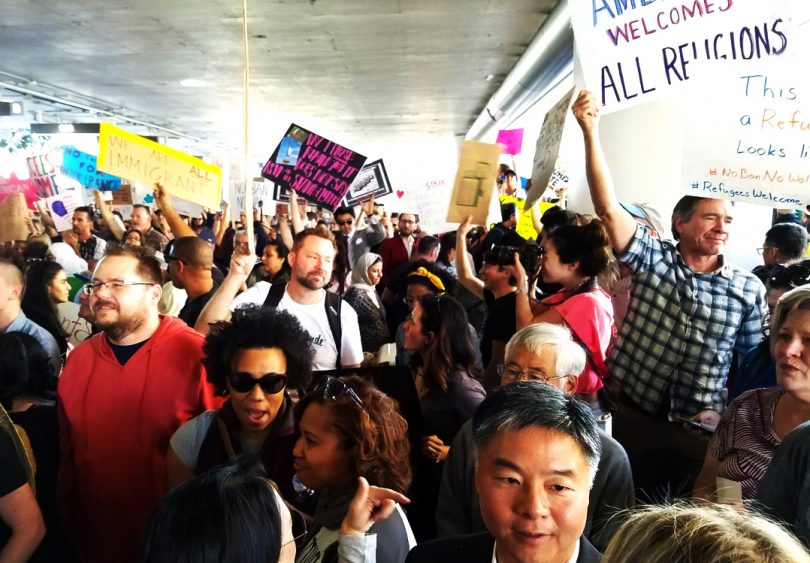 YES, BUT IS IT LEGAL?

After a weekend of many thousands of demonstrators mobbing the nation’s major airports—LAX prominently included—protesting the human issues surrounding President Donald Trump’s Friday, January 27, executive order, legal experts throughout California and the nation, including federal judges and the acting U.S. Attorney General (before she was axed) continue to question whether the order is constitutional or legal.

For a growing list of specialists in the realm of federal and constitutional law, the answer to both questions is a resounding NO.

The discussion of the legality of Friday’s executive order heated up still further on Monday afternoon, when the New York Times broke the story that Acting Attorney General Sally Yates, a holdover Obama appointee, ordered the Justice Department not to defend President Trump’s executive order on immigration in court.

“I am responsible for ensuring that the positions we take in court remain consistent with this institution’s solemn obligation to always seek justice and stand for what is right,” Ms. Yates wrote in her letter to Justice Department lawyers. “At present, I am not convinced that the defense of the executive order is consistent with these responsibilities nor am I convinced that the executive order is lawful.”

Yet, despite her sudden joblessness, Ms. Yates has plenty of company in her opinion on Trump’s order.

As of now, at least six federal judges have acted on the president’s executive order, demanding a temporary halt to the government’s efforts to detain or repatriate green card or visa-holding people from any one of the seven middle eastern countries the president named in his order: Iraq, Syria, Iran, Sudan, Libya, Somalia and Yemen.

While these judicial actions made over the weekend are not rulings on the ultimate legality of the president’s order, in each case the six federal judges—five of whom are women—had to be persuaded that there was good possibility Trump’s Friday order would be found to be illegal. Four of the judges explicitly stated the reasons they thought the refugee order was likely to be found to be in violation of either the law or the U.S. Constitution or both.

The most recent ruling came out of one of LA’s federal courts, when U.S. District Court Judge Dolly Gee responded to a petition and temporary restraining order hastily filed on Saturday by the ACLU of Southern California’s Peter Bibring, and immigration attorney, Stacy Tolchin, who asked the court to prevent an Iranian man named Ali Khoshbakhti Vayeghan from being detained or removed from the U.S.back to Iran. But by the time Judge Gee was able to rule, it was too late. The feds had already put Vayghan, who had come to the US to see his son, whom he’d not seen in ten years, on a plane back to Dubai, en route to Iran.

Judge Gee delivered a four-page ruling directing the government to bring Ali Khoshbakhti Vayeghan back from Dubai forthwith, writing that there was a “strong likelihood of success” in proving that Vayeghan’s detainment and removal “violates the Establishment Clause” of the “Immigration and Nationality Act, and his rights to Equal Protection guaranteed by the United States Constitution.”

With regard to the establishment clause of the Immigration and Nationality Act the judge mentioned, this refers to a federal immigration law that was significantly updated in 1965 to eliminate national origin, race, and ancestry as a basis for immigration restrictions. Specifically, Judge Gee is referring to the clause that reads: “[N]o person shall receive any preference or priority or be discriminated against in the issuance of an immigrant visa because of the person’s race, sex, nationality, place of birth, or place of residence.”

Her reference to “equal protection,” of course, applies to the Fourteenth Amendment to the Constitution, which provides that no state shall deny to any person within its jurisdiction “the equal protection of the laws.”

The first and most dramatic legal action to slap restrictions on the presidents ever-more-controversial order, and to opine about its legality came after the National ACLU, filed a broader petition for a writ of habeas corpus than that of the So Cal ACLU, combined with an equally broad class action lawsuit. The legal filing, also made on Saturday, named as its lead complainants two Iraqi family men whose lives were provably in grave danger as a consequence of their work for—or with—members of the U.S. government. One of the men, Hameed Khalid Darweesh, was a well known and liked Iraqi interpreter for the American military. The other, Haider Sameer Abdulkhaleq Alshaw, worked for an American security group in Iraq and has reportedly already had family members killed in reprisal for association with Americans. Alshaw was meeting his wife and 7-year-old son, who had immigrated earlier. Hameed Khalid Darweesh came over with his wife and children, who were allowed through, while he was not. Both men were reportedly in “imminent danger” of being returned to Iraq, against their will.

Instead, at around 6 pm Pacific time, Saturday night, U.S. District Court Judge Ann Donnelly, who presides in federal court in the Eastern District of New York, issued a temporary nationwide stay, blocking the government from removing immigrants with legal visas or green cards who were currently being detained at airports around the U.S.—including JFK, where Alshaw and Darweesh were being detained. (Here’s the text of Judge Donnelly’s two-page order.)

The petitioners, wrote Donnelly, “have a strong likelihood of success in establishing that” their removal, “and the removal of others similarly situated violates their rights to Due Process and Equal Protection guaranteed by the U.S. Constitution.” (In other words, the Fifth and the Fourteenth Amendments, respectively.) Two of the other federal judges who handed down rulings on the matter in which they made similar points in terms of what they believed the legality—or lack thereof—of Trump’s order to be.

In the wee hours of Saturday night/Sunday morning, two judges in the Boston area, U.S. District Judge Allison Burroughs and U.S. Magistrate Judge Judith Gail Dein issued a tersely worded restraining order that stated, among other things, that “the petitioners met their burden of establishing” there was a strong likelihood “that the detention and/or removal of the petitioners and those similarly situated would violate their right to Due Process and Equal Protection as guaranteed by the U.S. Constitution.” In other words, the Fifth and the Fourteenth Amendments again.

Also on Saturday night, in the Eastern District of Virginia, Judge Leonie Brinkema issued a temporary restraining order giving all permanent legal residents detained at Dulles Airport access to lawyers, but she did not cite underlying legal reasons.

During that same time period, U.S. District Judge Thomas S. Zilly of the Western District of Washington at Seattle granted an emergency stay of removal, which orders authorities not to remove those named from the country pending a hearing on Friday, Feb.3, to discuss the underlying legal and constitutional issues, and whether the stay should remain or be lifted.

THE POWERS OF POTUS & THE FIRST AMENDMENT

Despite the recent analyses by the federal judges, there are those who feel that this particular executive order is legal. An example is this essay for the Hill by Nolan Rappaport, who was detailed to the House Judiciary Committee as an Executive Branch Immigration Law Expert, and subsequently served as the immigration counsel for the Subcommittee on Immigration, Border Security, and Claims.

Rappaport writes that the order is “perfectly legal” in that the Immigration and Nationality Act (INA) that Judge Gee and others cite, has a clause stating that “whenever the president finds that the entry of any aliens or of any class of aliens into the United States would be detrimental to the interests of the United States, he may by proclamation, and for such period as he shall deem necessary, suspend the entry of all aliens or any class of aliens as immigrants or nonimmigrants, or impose on the entry of aliens any restrictions he may deem to be appropriate.”

But Rappaport is referring to the 1952 version of the INA, not the 1965 version that replaced it and made it, as Richard Nixon used to say, inoperative.

In this matter, it is worth taking a look at an op ed in the Sunday LA Times in which Erwin Chemerinsky, dean of the U.C. Irvine Law School of Law—and recently named the “most influential person in legal education” in the US by National Jurist magazine—lays the matter out in clear and easy terms.

To begin with, Chemerinsky writes, it’s against the law to “bar individuals from entering the country based on nationality.” Period, full stop. “The Immigration and Nationality Act of 1965 [see Judge Gee’s related reference above] explicitly says that no person can be “discriminated against in the issuance of an immigrant visa because of the person’s race, sex, nationality, place of birth or place of residence.” (Ital. ours)

Dean Chemerinsky explains that this act “was adopted to eliminate the prior practice of immigration quotas from specific countries,” which were embedded in the previous 1952 law (along with other clauses, such as the one Rappaport cites). “Indeed, in signing the legislation, President Lyndon Johnson said that ‘the harsh injustice’ of the national-origins quota system had been ‘abolished.'”

In other words, absent an act of Congress, according to Chemerinsky, the new executive order violates federal law, because the government is prohibited, when it comes to immigration, from discriminating “based on nationality or place of residence,” which is precisely what the president ordered to be done.

Like the federal judges, Chemerinsky writes about what he deems the unconstitutionality of the executive order, but instead of mentioning the Fifth and Fourteenth Amendments, he opts to discuss the First

“Under the 1st Amendment,” he writes, “the government may not favor one religion over others.” And while Trump’s executive order doesn’t mention Muslim’s specifically, it is “obviously its purpose and its effect as it bars entry to individuals from predominantly Muslim countries.”

The order also instructs Homeland Security, Chemerinsky writes, after the 120-day waiting period, “to prioritize refugee claims ‘made by individuals on the basis of religious-based persecution, provided that the religion of the individual is a minority religion in the individual’s country of nationality.'” In other words, Christians.

For Muslim’s fleeing persecution there is no such priority.

Obviously, there are many additional opinions about the president’s alarming and harmful executive order caroming across the legal landscape, with still more to come, as this bruising national legal battle continues. But we figured, since the stakes are extremely high, we’d give you a place to start.