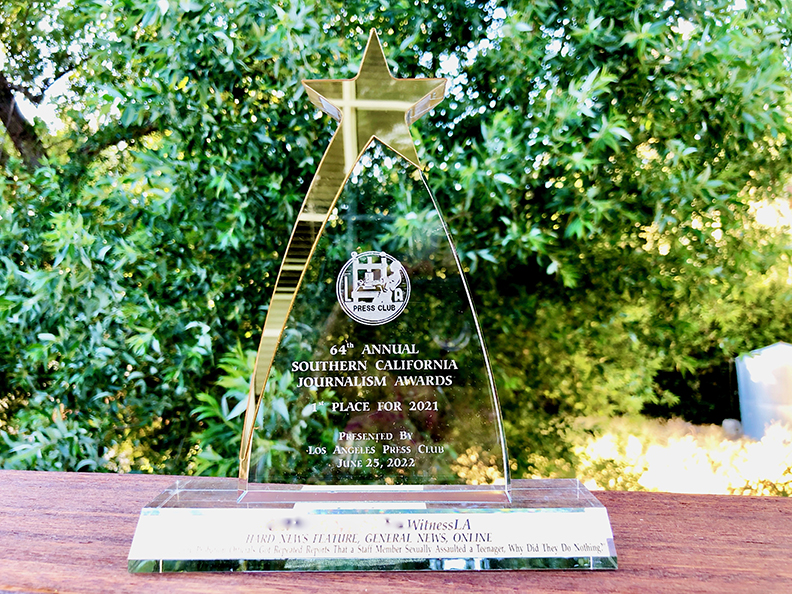 On Saturday night, June 25, the LA Press Club announced the winners of its Southern California Journalism Awards at a sold out awards dinner at the Universal Regency Hotel.

Last month, WitnessLA was delighted when we learned we’d been selected as finalists in the two categories we entered.

Then on Saturday night, we were both stunned and thrilled when we were called up twice during the evening to accept first prize in this same two categories.

WitnessLA’s Taylor Walker won in the category of “Solutions Journalism,” which is defined as “rigorous reporting on a response to a problem and its associated evidence.”

Specifically, she won the award for her important five part series Pregnant Behind Bars, which looked at “how LA County’s Maternal Health Diversion Program disrupts the incarceration cycle by moving pregnant people out of jail cells and into supportive housing.”

The judges described her series as “exemplary as solutions journalism and all round great journalism. It portrays the featured individuals as mothers with goals, rather than solely incarcerated people,” the judges wrote. “It is candid and thorough with shortcomings, and it embraces the complexity around what it takes to make programs like this work over time.”

(Among the other finalists in this same category were strong stories from the LA Times and the Christian Science Monitor. So the competition was stiff!)

WitnessLA also won in the category of “Online Hard News Feature,” for a story that is part of our ongoing #MeTooBehindBars series.

The winning story was an investigative feature in which WLA asked why, when LA County Probation officials got repeated reports that a staff member had sexually assaulted a teenager, did they do nothing to investigate the matter for nearly a year.

The judges called the story a “powerful investigation into a blatant injustice.”

The art of supporting journalists

The Los Angeles Press Club, which sponsored the awards, was initially launched in the 1900s, and has worked ever after to “support, promote, and defend quality journalism in Southern California.”

For more than half a century one of the ways the Press Club has encouraged journalists is by giving reporters public recognition with the Southern California Journalism Awards, which has been “recognizing and encouraging excellence in journalism,” for 59 years.

WitnessLA is honored to be among this year’s list of winners.

We agree, and wish congratulations to all!