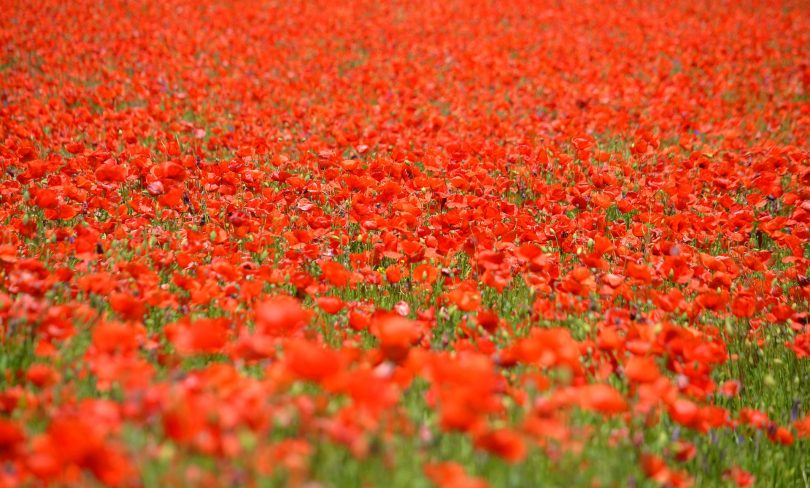 The red poppy has come to represent our men and women who have fallen in war. The reference comes from the poem In Flanders Fields by John McCrea, written about World War I. The poem specifically memorializes the April 1915 battle in Belgium’s Ypres salient.

For 17 days, McCrae, a Canadian poet, soldier, and physician, tended those injured in the battle. The poem, written after the death of a close friend, was first published in Punch magazine and led to the adoption of the poppy as the Flower of Remembrance for first the British and Commonwealth war dead. The symbol has now traveled to the U.S., as explained in this story in Stars and Stripes.

This year, a temporary Poppy Wall of Honor, erected by the USAA, is located on the National Mall between the Lincoln Memorial and the Korean War Memorial and has been open for visitors since Friday, May 24 through today, Sunday, May 26.

Also, for those service men and women whom we honor this Memorial Day,  here once again is Jason Isbell’s beautiful and heartbreaking song Dress Blues, written for his high school friend, Marine Cpl. Matthew Conley, who was killed at age 21 in Iraq in February 2006 when his Humvee rode over an improvised explosive device.

If you want to do something concrete today for American service men and women, we always recommend a donation—small or large— to these excellent folks at the Wounded Warrior Foundation.

And this year we recommend you check out The Gary Sinise Foundation, which is newer and has the highest possible rating on Charity Navigator, with an unusually high percentage of your donation going straight to programs for veterans., particularly those who served in Iraq or Afghanistan.