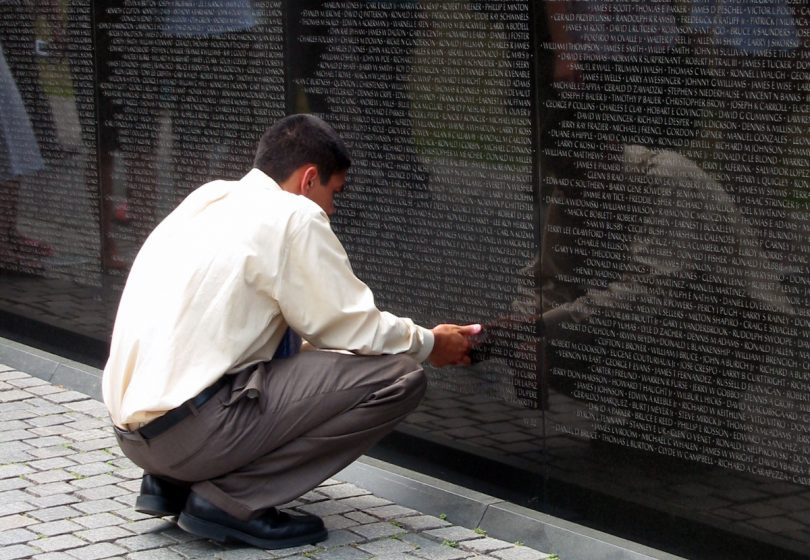 When it comes to the variety of thoughts and emotions that Memorial Day brings forth, often music can express what speeches cannot.

For example, although he has never been in the military, Jason Isbell has written two songs that reach out to veterans, and to those who have lost family members to war. The songs are Tour of Duty, and Dress Blues.  You’l find the latter below.

“I’ve been home from Iraq for almost five years now,” wrote Stacy Bare, an OIF veteran, of Dress Blues, which Isbell wrote about the death of a high school friend. “I’ve been to countless parades, memorial services, and funerals. Somehow though, in a crowded theater,” said Bare, “this song was the most moving public tribute and memorial to all that we had lost, and gained, in Iraq and Afghanistan.”

This next song,  I Can’t Write Left Handed, was written in 1973 by Bill Withers about the Vietnam War. Yet, this remarkable version performed by John Legend and The Roots , which was directed by Spike Lee, is, if anything, more emotionally affecting than the song was nearly half a century earlier.

Lee Brice didn’t write the song, “I Drive Your Truck.” But he made it famous. It was written by the songwriting team of Jessi Alexander, Connie Harrington and Jimmy Yeary, based on a story Harrington had heard on NPR about a man named Paul Monti, whose son, Jared Monti, had died in a battle in Afghanistan while saving a fellow soldier. When the father was asked if there was a particular way he would remember his son on Memorial Day, Monti said he would drive his truck.

If you’ve not before heard the song, please don’t miss it now.

Bruce Springsteen has written famously about veterans and wars in the past, including in his most misunderstood protest ballad, Born in the USA.  With “Devils and Dust”  he wrote about men and women serving Iraq and Afghanistan

Yet, the song that Springsteen’s  most personal and the most appropriate for Memorial Day is “The Wall,” released in 2014, and dedicated to two friends of his own teenage years, Walter Cichon who was the talented frontman of a then rising Jersey bar band called the Motifs, and and Bart Haynes who was the drummer in Springsteen’s first band, the Castiles. Both went off to war in Vietnam, when the young Springsteen did not.

And of course there is the Chicks’ Travelin’ Soldier. The song was composed and originally recorded by Texas singer-songwriter Bruce Robison. But it took three women to make it indelible.