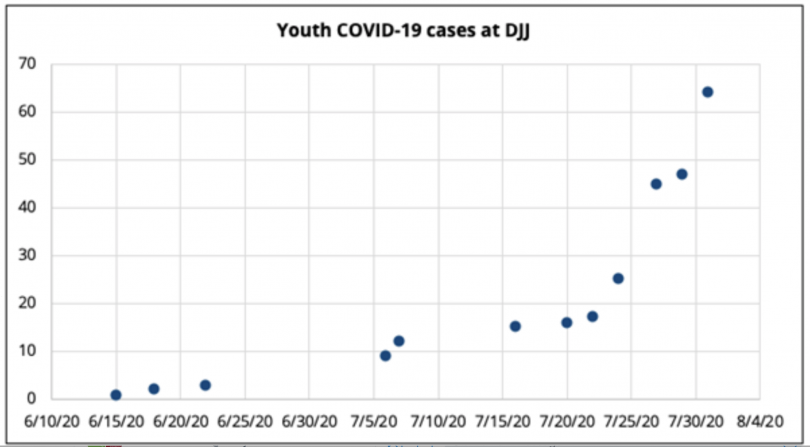 COVID-19 is spiking in California’s youth prisons.  And the upward climb has yet to stop.

As of August 3, 64 youth have tested positive for the COVID virus inside the state’s three youth lock-ups run by the Department of Juvenile Justice, which is in turn run under the auspices of the California Department of Corrections and Rehabilitation, the state’s prison system.

Unlike California’s adult prisons, inside which a health catastrophe continues to explode, at DJJ, as the youth prison system is known, for the first three months of the pandemic there were zero youth diagnosed with the virus. 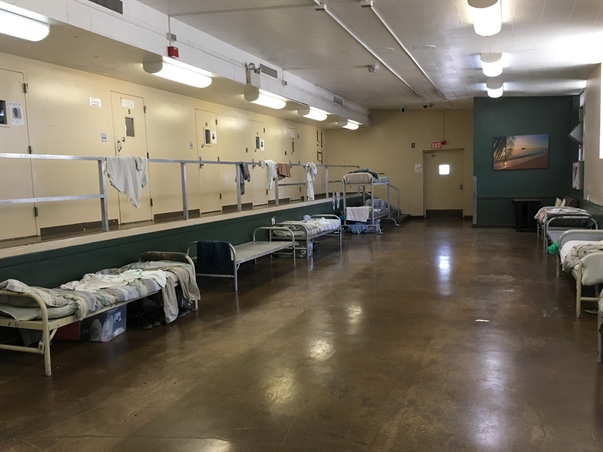 It would be nice to think that the lack of cases could be attributed to excellent disinfecting and social distancing protocols inside these facilities.  But, since the beginning of April, sources inside DJJ, have told us otherwise, and sent us documents that back-up their accounts.

(In one case, in a discouraging exchange of mid-March emails that WitnessLA acquired, DJJ supervisors tried, without success, to figure out what kind of disinfectant could be acquired in under two months in order to wipe down tables and desks that students were still using regularly.)

Yet, whatever made for DJJ’s good luck, it was aided by the fact that, on March 24 of this year, twenty days after Governor Newsom declared his original state of emergency regarding the COVID-19 pandemic, the governor issued an executive order to “suspend intake” of any new entrants into California’s adult prisons, hoping not to import the virus from the various county jails, that fed the prison system.

Newsom did the same thing for DJJ, by prohibiting any new youth from being transferred from the counties to the state’s three youth lock-ups, and its youth fire camp.

But on May 25, as California was proceeding with a multi-phased partial opening, the state’s youth facilities inexplicably reopened their doors, and again began taking kids who were shipped from the various counties, prominently including Los Angeles, which consistently accounts for around 22 percent of the kids in DJJ.

As of June 30, 2020 LA County had 161 young people—both male and female — in DJJ facilities, according to LA County Probation spokes person, Adam Wolfson.

We don’t yet know how many LA youth arrived at DJJ between now and the May 25 reopening.

The virus arrives and DJJ is reportedly woefully unprepared

Whether it was asymptomatic youth bringing the virus in from the counties, or staff bringing COVID-19 in from the community,   on June 14 — twenty days after DJJ threw open its doors — DJJ got its first positive testing young person in the NA Chaderjian Youth Correctional Facility (otherwise known as CHAD) located in Stockton.

On June 18, a second CHAD kid tested positive, followed by a third kid on June 22.

Disturbingly,  when the first two youth displayed symptoms at OH Close, no one saw fit to immediately quarantine the kids in the open plan dorm where the two young people who had gone to the medical unit had been living.  Reportedly, not even staff who worked with the kids in the affected dorm were notified.

“We had to learn from the kids,” one staff member told us unhappily.

(WitnessLA has agreed not to disclose the names or anything else identifying of our DJJ sources to protect their anonymity.)

Even then, according to our sources working inside the DJJ system, higher ups in the youth facilities seemed “totally unprepared,” for appropriate quarantining and social distancing.

“This means that, when finally something happened and we had two kids with a fever and other symptoms, there was no plan,” said a source. “The world was shut down, but we had no plan in place about what to do,. Why did it take so long to get the word out?  Why did it take so long to get the unit on quarantine?”  Meanwhile, he said, staff were going in and out of the affected dorms.  “We’re a state agency.  But for some reason the governor’s guidance that went out to schools, but we acted as if it hadnothing to do with us.”

And so it was that at Chad and at O.H. Close, the numbers began to climb.  However, the Ventura Youth Correctional Facility, located close to Camarillo, at first remained unaffected..

Then on July 17, Ventura’s luck changed when the first youth tested positive at the Southern California youth prison.

A week later still on Friday July 24, the spiking began when 21 kids and one employee had tested positive at Ventura.

Six days after that, the number had more than doubled in Ventura, with 39 youth testing positive,

Overall, as of the beginning of August, 64 youth, and 18 staff members have tested positive for the virus between the three youth prison facilities of Chad, OH Close, and Ventura.

Shutting down the pipeline.

The question is this:  for what possible good reason did the governor, and the CDCR open the pipeline from the counties into DJJ again?  And why, once kids started getting diagnosed with COVID-19, did no one realize that the unwisely opened spigot needed to be wrenched closed—immediately.

“Youths’ lives are at risk because DJJ and state leaders failed to act decisively,” Maureen Washburn, policy analyst for the Center on Juvenile and Criminal Justice (CJCJ), told WitnessLA.

“DJJ should never have resumed intake in the midst of a deadly pandemic. We know from the tragedy unfolding at San Quentin that transferring people from one facility to another accelerates the spread of disease. Yet, it took administrators nearly seven weeks after the arrival of COVID-19 to finally close DJJ’s doors.”

In a new report of her own, Washburn noted that  recent research has indicated that the virus may pose a greater risk of severe illness to young people than scientists once thought.  And according to still another study released in mid July by UC San Francisco Benioff Children’s Hospitals, it now appears that young adults are far more likely to be hospitalized if they get the virus than experts had concluded several months ago.

In any case, on July 29 in the case of the Ventura youth prison, and July 30, for the Stockton facilities, the California Department of Corrections decided once again that it might be a good idea to turn off the spigot of kids coming from the various counties, with Los Angeles County not surprisingly being one of the most active sources of new kids.

“This two-week pause will allow current active cases of COVID-19 to resolve,” wrote state officials, “and then DJJ will reevaluate the situation.”

“This outbreak is a worst case scenario,” said Washington. ” “It’s affecting open dormitories where dozens of youth sleep in poorly-ventilated bunk rooms. It’s being brought in by staff who, until recently, weren’t being tested for COVID-19 at all. And it’s occurring in a system that’s just not set up to manage this public health emergency.”

DJJ has a long history of putting barriers between youth and medical care, she said. “We are fearful that the system’s past patterns of neglect are being magnified during this crisis.”

Okay,  so with all this in mind, what exactly is being gained by unnecessarily continuing to yank kids out of county facilities during a pandemic and shipping them off to the state’s youth prisons—especially when, in a few months, DJJ, itself, will begin the process of closing down altogether?

In case readers have forgotten,, on May 14, Governor Gavin Newsom announced a plan to shutter the state’s youth correctional system permanently.

So why are we still shipping kids far away from their families and communities now?

LA County Probation has not been perfect with their handling of the COVID-19 crisis.  But, by all accounts they’ve been many times more rigorous in their testing, and appropriately quarantining kids when they may be exposed, than DJJ has, as the newly spiking numbers in the state youth lock-ups make clear.

The alternative to the seeming illogic of continuing to send kids to DJJ during a pandemic, when the state’s youth prisons are scheduled to be phased out anyway, is the proposal suggested in a July 30, 2020, joint statement recently published by Miriam Krinsky’s  Fair and Just Prosecution,  along with a list of reform minded youth of correctional leaders from all over the nation, who collectively make the point that the pandemic is a good time for the nation to reconsider the idea of youth prisons altogether, or at the very least, to start releasing kids early whenever possible.

“Across the country, justice system officials are collaborating with nonprofit organizations, families, and other stakeholders to move youth out of facilities, where there was high risk of infection.”

The statement, and its linked reports, speak to how the change may be done safely, as outlined, for example, in the February 2019 study by Columbia University’s Justice Lab, titled Moving Beyond Youth Prisons.

“No wave of youth crime has resulted,” FJP and the youth correctional leaders write. “Instead, young people are being cared for by those who are best-positioned to do so – their families and communities, the environments in which they need to eventually succeed anyway.”

In June, when the first three DJJ kids tested positive for the virus, Washburn and her colleagues at CJCJ, along with other youth advocacy organizations, pressed California lawmakers to prevent a serious virus outbreak by drastically reducing DJJ’s population “through systematic releases, prioritizing youth who are medically vulnerable or likely to be released within six months.”

Yet no such releases occurred.

And, just in case you’re not aware, when it comes to youth detention, youth arrests and detentions have fallen  in the U.S., young people of color are still far more likely to be locked up, than white kids.

But now, in California, the state youth lock-ups include exposure to a spike of COVID-19 cases.