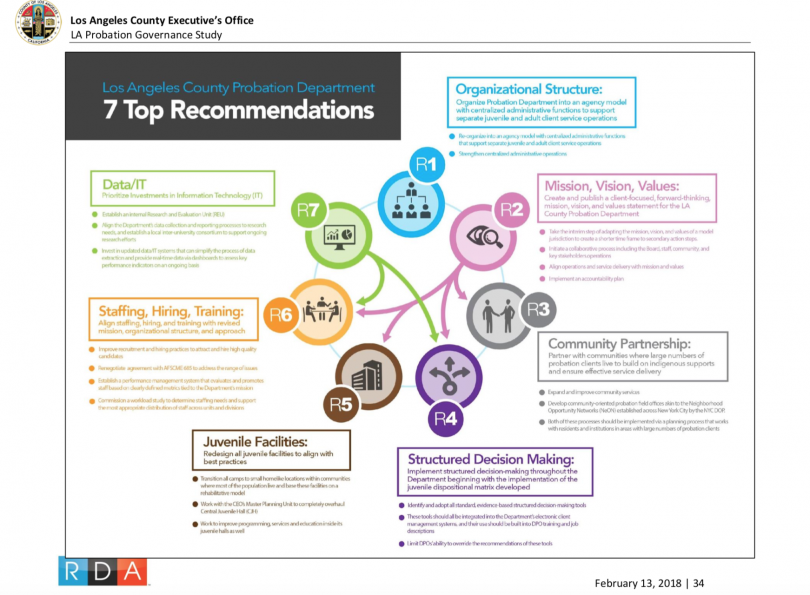 EDITOR’S UPDATE: The motion you’ll read about below passed unanimously on Tuesday, May 1. We’ll have the details in an upcoming story.

On Tuesday, the Los Angeles County Board of Supervisors will finally vote on a motion that, if passed, will trigger the creation of an independent body to oversee the LA County Department of Probation.

“It is well documented,” wrote the motion’s authors, Supervisors Mark Ridley-Thomas and Hilda Solis, “that the Department has struggled for years to fulfill its mandate of rehabilitating and reintegrating the youth and adults it serves.”

Although Probation Chief Terri McDonald, who took the helm in January 2017, has made gratifying progress in reforming the sprawling, problem-plagued department, the reform of any agency of the size and complexity of LA County’s probation department is a lengthy and often thorny endeavor, and it is rarely accomplished simply by changing the management at the top, no matter how positive that change might be.

In the case of the LA County Sheriff’s Department, jump starting any kind of significant reform took, among other things, a 194-page detailed and excoriating report from the Citizens Commission on Jail Violence, a humungous class action lawsuit brought—and won—by the ACLU, several MOUs with the Department of Justice, and the trials and federal convictions of more than 20 department members for various kinds of corruption and/or brutality, culminating with the conviction of the longtime and popular former sheriff, Lee Baca.

And still the public and the board of supervisors rightly decided that the department also needed two kinds of oversite entities: the Office of the Inspector General, and now the Los Angeles Sheriff’s Civilian Oversight Commission, the latter established on January 1, 2016.

The Los Angeles Police Department, of course, has its police commission, along with its own OIG. Even so, to yank the LAPD out of the toxic ends-justifies-the-means culture that produced the Rodney King beating, the LA riots, and the Rampart scandal, also required a sharp-toothed federal consent decree. It is instructive that when Bill Bratton took over as chief in October 2002, he wisely used the consent decree as a tool, rather than viewing it as an obstacle or an irritant. And it paid off.

Despite its strengths and the dedication of the majority of its officers, probation’s past is no less troubled than that of the LASD and the LAPD—both of which also have dedicated and excellent officers too.

Thus to make the changes needed to bring the county’s probation department fully and healthily into the 21st century, logic suggests that the creation of a civilian oversight commission is called for. A big step in the direction of such an oversight body occurred on April 9, when LA County Chief Executive Officer Sachi Hamai delivered a report to the board outlining a concrete, step-by-step plan to establish a Probation Oversight Commission (or POC), which would “mirror” the Sheriff’s Civilian Oversight Commission, according to the report.

A new probation oversight commission would also use the LA County OIG as its investigative arm, which would give the proposed new commission much greater heft.

Three or more YES votes on Tuesday’s motion will put the April 9 plan into motion.

It is important to point out here that LA’s Probation Department already has a commission. But the present Probation Commission, created in 1903 to advise the then Chief Probation Officer, is hampered by the fact that it has no real power. It can make recommendations to the probation chief, but that’s about it. It also focuses only on the juvenile side of probation, not the side dealing with adults. And it certainly has no real investigative capacity.

Furthermore, when the the commissioners—a group that includes juvenile attorneys, a gang prosecutor, a former judge, a former probation officer, two retired members of law enforcement, several youth advocates, and more—try to get information from probation higher-ups, sometimes they get all the information they’ve requested, sometimes they don’t, a situation that does not promote meaningful oversight.

The proposed new commission, by contrast, would report directly to the board of supervisors. That direct report, along with the POC’s investigative function would, according to the motion, give it the wherewithal to “oversee ongoing reform efforts within the Probation Department, as well as to provide counsel and direction, with regards to emerging youth and adult supervision policies and practices. These recommendations,” continues the motion, “would further the County’s ability to develop mechanisms for accountability and transparency.”

There has been no shortage of reports paid for by the supes in the past few years that have looked deeply into how probation could best reform itself.

The most recent of these is an approximately 500-page L.A. County Probation Governance Study delivered to the supervisors this past February by the by Oakland-based consultant group, Resource Development Associates (RDA).

The report’s genesis was a Kuehl/Ridley-Thomas motion that was unanimously passed two years before, on February 16, 2016. This motion ordered up an assessment of the probation department’s structure and operations with the goal of making recommendations for improvements, and a plan for reform.

The result was a remarkably well-researched multiple-volume tome that laid out seven “key” recommendations for the department that, if implemented, according to the RDA team, “will establish the necessary framework for transforming” the nation’s largest probation agency into “a best practice 21st century model.”

Yet, although the RDA report has been widely praised, many worry that it could wind up being looked at but then basically shelved, rather than becoming the roadmap for which it was intended.

Any leanings toward shelving, however, would reportedly change with the creation of the proposed POC, as one of its primary jobs will be to “monitor” and “support” the reform of the department it oversees—-making sure reform efforts, such as those outlined in the RDA Probation Governance Report specifically, don’t stall or wander from the mark.

To help accomplish these goals, according to the CEO’s report, the POC would create such oversight tools as timelines, desired outcomes, metrics, and key performance indicators, and would periodically produce oral and written reports “detailing the status of departmental reform efforts.”

So will the supervisors vote on Tuesday to establish this brand new Probation Oversight Commission?

We really, really hope so.